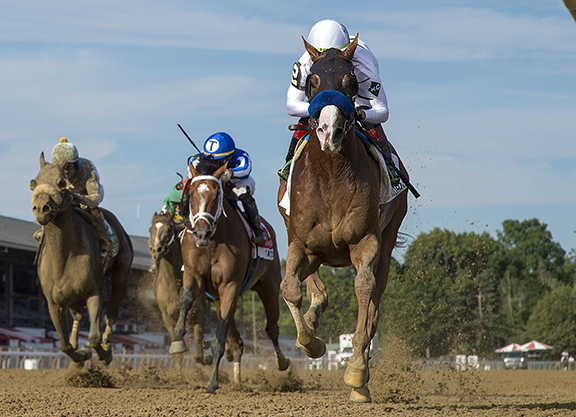 When considering stallion potential, brilliance and precocity are rarely left out of the equation. But a unique find emerges when a headlining juvenile can carry out his talent as a sophomore and even as an older horse before beginning his stud career.

Two of WinStar Farm's new recruits for 2021, Improbable (City Zip) and Promises Fulfilled (Shackleford), showed brilliance early on in their careers as flashy debut winners before each went on to become stakes winners at three and four.

We spoke with WinStar's David Hanley on the pair of Grade I-winning additions.

“The thing that was so impressive about this horse was his soundness,” Hanley said of four-time Grade I winner and Eclipse candidate Improbable. “From when he went to Bob Baffert as a 2-year-old, he never missed a day, never had an issue. He was so consistent. Every week you asked how he worked and Bob's response was, 'awesome.'”

In his 15 career starts over three years, Improbable ran in the money in all but four.

“I think that soundness is really important for his future as a sire because in the world we live in today, soundness is such a factor,” Hanley said. “This horse with his mechanics, the way he moved and how sound he was, if he passes that on to his progeny, it gives him a great shot to have a lot of runners.”

A $200,000 Keeneland September purchase, Improbable was a debut winner for the same owner-trainer connections that campaigned another speedy chestnut in Triple Crown winner Justify (Scat Daddy). He followed up with a 7 1/4-length victory in the Street Sense S. on the 2018 Breeders' Cup undercard while earning a 'TDN Rising Star' nod.

“He ran that race in the fastest time of the previous 10 years,” Hanley noted. “He really was a top-class 2-year-old and always showed that. From when we broke him in the spring, he just had it together.”

From there, Improbable ran second in the GII Rebel S. and again in the GI Arkansas Derby behind Omaha Beach (War Front).

He finished fourth in the GI Kentucky Derby, and although he registered a victory in the Shared Belief S. at Del Mar's summer meet, the chestnut couldn't land a graded stakes win in the later half of his 3-year-old year.

“I think after going through the Derby, he got a little bit frazzled and kind of lost his way a bit through the rest of his 3-year-old season,” Hanley admitted. “He got very fired up in the gate and was running his races very hard on the bridle and not settling. But then as a 4-year-old when he got back to Bob in the spring, suddenly he was working a bit more relaxed. He was working unbelievably and showed it on the racetrack when he won three straight Grade I races with 105, 106 and 108 Beyers.”

Hanley notes Improbable's 4 1/2-length win over barnmate and champion Maximum Security (New Year's Day) in the GI Awesome Again S. as his strongest race of the Grade I trio.

“When Drayden Van Dyke took hold of him and he got on the bridle and let him run, he just exploded. I think that was a really super impressive performance.”

Equally as memorable was his two-length victory in last summer's GI Whitney S.

“He was always in control of that race,” Hanley said. “He traveled easily just off the pace and when Irad [Ortiz] took the lead, he just drove off from there.”

While Improbable ran second behind Authentic (Into Mischief) in his final career start in the GI Breeders' Cup Classic, he earned a 108 Beyer and a 2 Ragozin, the fastest of the race, while traveling over six lengths farther than the winner.

Improbable retired with earnings of over $2.7 million as the leading earner for his sire City Zip, who passed away when Improbable was a yearling.

“City Zip was a wonderful sire,” Hanley said. “He sired 72 stakes winners, six champions, and was a wonderful racehorse himself. So I think that's a sire line that's going to produce some good stallions.”

Improbable is a son of the winning A.P. Indy mare Rare Event, whose stakes-winning dam Our Rite of Spring (Stavinsky) is a half-sister to Grade I winner and sire Hard Spun (Danzig).

With other top sires in Awesome Again, Giant's Causeway and Candy Ride (Arg) hailing from the Blushing Groom line on their damside, Hanley said he believes with Blushing Groom on both Improbable's top and bottom side, his pedigree shows a unqiue potential.

“He's also out of a really deep Darby Dan family,” he added. “He comes from one of their great foundation mares Banquet Bell, who herself was the dam of a Kentucky Derby and Belmont S. winner and a champion.”

Already booked to 160 mares for this season, Improbable has been popular with the breeders.

“He is what I would consider a medium-sized horse,” Hanley said. “He's tremendously well made. He's got great length from his hip to his hock and great leverage behind. He really hits the ground, as Drayden Van Dyke said, 'like a cloud.'”

From the beginning, Hanley says, Improbable's most noticeable quality was his exceptional movement–an asset that has proven to be useful in attracting a strong book of mares for his initial season at stud.

2-year-old, he would breeze a quarter and then just gallop around the track like there was no end to him,” Hanley said. “He had great motion and everything came easy to him. As Bob Baffert said, he's one of the prettiest-moving horses you could ever see and I think that's something that's going to stand him in good stead if he can produce that in his foals.”

“I think his trademark was how genuine he was,” Hanley said of five-time graded stakes winner Promises Fulfilled. “He would go as fast as he could and when the other horses would come to him, he would bear down and give everything he had. He would drop down and stick his head out and give his all every time.”

Recruited and trained by Dale Romans for Robert Baron, Promises Fulfilled was a four-length debut winner at two before taking an allowance at Keeneland and running third in the GII Kentucky Jockey Club S. to wrap up his juvenile season.

He continued on the Derby trail at three with a victory in the GII Fountain of Youth S., breaking first and never giving up the lead to defeat Strike Power (Speightstown) and champion Good Magic (Curlin) by 2 1/4 lengths.

The speedy chestnut broke on top in his next two starts, clocking a :45.77 half mile going head-to-head with Justify (Scat Daddy) in the GI Kentucky Derby, but failed to stay on to finish in the money.

He realized his full potential after turning back in distance in the later half of his 3-year-old season with consecutive wins in the GIII Amsterdam S., GI H. Allen Jerkens S. and GII Phoenix S.

“It was quite an amazing performance to go through what he did in the spring trying to stretch out and then come back and be as competitive as he was,” Hanley said. “That was the period of time when we started to think he was a really serious horse.”

A win the following summer in the GII John Nerud S. with a career-high 108 Beyer sealed the deal, and WinStar bought in on the millionaire earner soon after.

“He was very fast out of the gates, always on pace and really let himself down in his races to finish up strong,” Hanley said. “He ran six sub-:44.4 times in graded races.”

After a layoff following his 4-year-old season, an issue days before his next start kept Promises Fulfilled from racing on at five in 2020.

“It was kind of unfortunate because he was a year from running when he went to stud, so people are quick to forget just how good of a 3-year-old he was,” Hanley said. “But we're really excited about him because we think he was a horse with a lot of speed and ability.”

Promises Fulfilled retired with earnings of nearly $1.5 million and ran in the money in 10 of his 17 career starts.

Hanley noted that breeders have been surprised that the sprinter's physical reflects more of a two-turn type mold.

“He's quite a big horse, with a lot of leg under him and a lot of stretch to him,” he said. “So it's interesting that he was as fast as he was. We're really excited to see what kind of foals he'll produce because with his pedigree, speed and physique, he's capable of getting two-turn horses that have some speed.”

The son of Shackleford is out of the Marquetry mare Marquee Delivery, who herself is Grade III placed but is also the dam of three additional black-type horses. Promises Fulfilled's half-sister Marquee Miss (Cowboy Cal) was a five-time stakes winner.

“Shackleford was by Forestry (Storm Cat), so it's a speed sire line,” Hanley said. “Shackleford himself was out of the mare Oatsee, who is by Unbridled. So you can see where Shackleford got his leg and size, and where Promises Fulfilled got it as well.”

He continued, “I think he'll put a bit of size and stretch into his mares. He could fit anything. He was such a fast horse, and he did win going a mile and a sixteenth and looks like a two-turn horse, so anything is possible.”