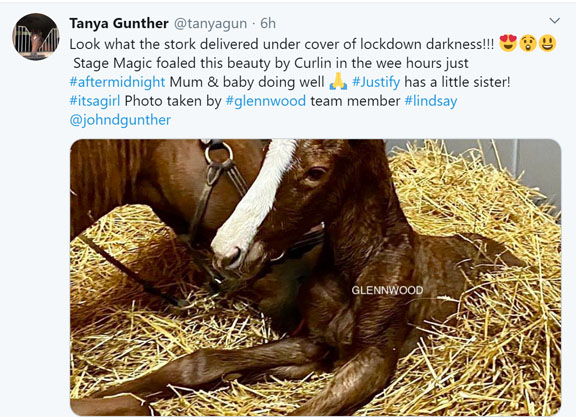 “We are quite excited to have a filly,” Gunther’s daughter Tanya said Tuesday morning. “We don’t fetal sex our mares, so we never know what we are going to get. We were very keen to get a filly since we don’t have one out of the mare. So that was very good news. And just to have a nice safe, healthy foaling took a lot of stress off.”

Of the foal, Gunther said, “So far, it looks like she has good bone, good leg, she’s got nice long ears that are kind of cool looking. She looks like her brother and her mom, so that’s always a positive. She’s got a nice shoulder on her. It’s too early to tell, but I like what I’ve seen so far.”

Stage Magic’s two most recent foals were both colts, a 3-year-old named One More City (Will Take Charge) and an unnamed 2-year-old by Pioneerof the Nile. Both colts went through the ring at the Keeneland September sale as yearlings, but the plan will be to keep and race the new filly.

“We better [keep her], otherwise I’ll have to lay down in front of the trailer or something,” Gunther said with a laugh.

The 13-year-old Stage Magic will be bred back to Curlin this year.

In addition to Justify, who swept the Triple Crown and was named champion 3-year-old during a whirlwind six-for-six racing career in 2018, Stage Magic is also the dam of graded stakes winner The Lieutenant (Street Sense). Her once-raced daughter Egyptian Storm (Pioneerof the Nile), a $230,000 Keeneland September yearling in 2017, sold in foal to Quality Road for $750,000 at last year’s Fasig-Tipton November sale.

“They are both in training,” Gunther reported. “The Will Take Charge was a big boy, if you remember him, so it’s taken him a bit longer to come together, but he’s doing well. We are hoping that there is a return to racing at some point in the near future and we’ll get a chance to move forward with him. The 2-year-old is in training as well, doing well, but it’s early days, at least for us. We don’t tend to push them out the door to a trainer too quickly. We wouldn’t usually expect to be putting them with a trainer until May or June at the earliest stage, so we haven’t made any plans in that regard with him.”