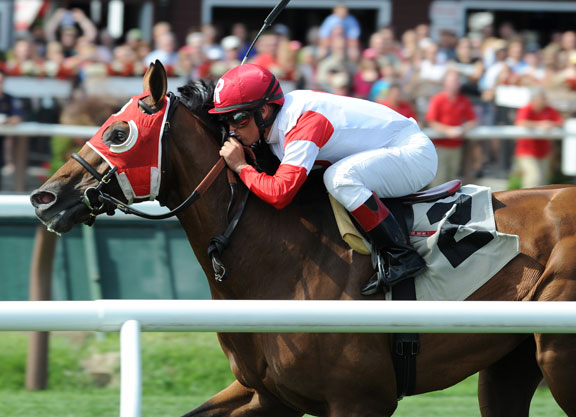 With the defending champion The Pizza Man (English Channel) headed to the Million, Saturday's GIII American St. Leger S. has a wide-open feel to it.

Lucky Speed (Ire), a son of the aforementioned 2001 Million winner Silvano (Ger), landed the G1 Deutsches Derby in 2013 and was favored, but only fourth, behind subsequent G1 Melbourne Cup winner Protectionist (Ger) (Monsun {Ger}) in last year's G2 Hansa-Preis. Third in the G1 Grosser Preis von Berlin, he was sidelined off a ninth in the G1 Grosser Preis von Baden in September and returned to action with a solid fourth in the GII Nijinsky S. at Woodbine July 19. That event was over a nine-furlong trip that is well short of his best and he can move forward with the added real estate here.

Ken and Sarah Ramsey's Hyper (Victory Gallop), an 8-year-old entire and not by Kitten's Joy, also exits a trip to the Great White North, where he closed willingly to be third in the 12-furlong GIII Singspiel S. In his lone effort beyond that distance, the homebred–who sports a similar lifetime trajectory to Big Blue Kitten–proved the easy winner of the John's Call S. going a mile and five-eighths at Saratoga during the summer of 2013. The in-form Irad Ortiz Jr. takes over at the controls.

Crucero (Admiral's Cruise) is the rare American-based runner with a win at this distance, having most recently won the GIII San Juan Capistrano S. at Santa Anita June 28. Highball (Lemon Drop Kid) also rates a longshot look for trainer Wayne Catalano and owners Gary and Mary West. The half-brother to recent Saratoga maiden winner Sage Hall (Cape Blanco {Ire}) was something of a wiseguy horse when fifth in the GI Secretariat S. last year and finally cleared his second allowance condition at Churchill June 25. He's never been this far, but he's by a Belmont S. winner and is not impossible.