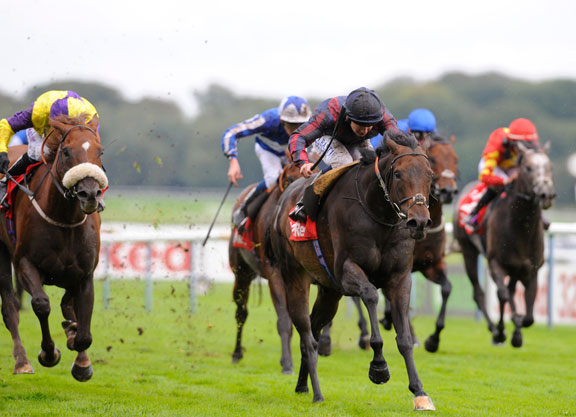 The subject of a publicised jockey change in mid-week, The Tin Man (GB) (Equiano {Fr}) benefitted from the Oisin Murphy treatment on Saturday and duly produced some magic to come out on top in a rain-affected G1 32Red Sprint Cup at Haydock. Staying on into third from far back in the G1 Prix Maurice de Gheest over 6 1/2 furlongs at Deauville last time Aug. 5, the 7-1 shot again had more in front than behind early as Hey Jonesy (Ire) (Excelebration {Ire}) refused to give the free-running defending champion Harry Angel (Ire) (Dark Angel {Ire}) a moment's peace on the front end. Slicing between rivals in his inimitable style, The Tin Man struck the front approaching the furlong pole and held off fellow closers Brando (GB) (Pivotal {GB}) and Gustav Klimt (Ire) (Galileo {Ire}) by a half length and a neck. “I'm absolutely thrilled, as he's run some great races without winning this year,” trainer James Fanshawe said of the 6-year-old, who was recording a third success at this level after the 2016 G1 Qipco British Champions Sprint S. and last year's G1 Diamond Jubilee S. under his previous pilot Tom Queally. “I was worried about the ground, but I always had it in the back of my mind that the rest of the family loved it. It was a long last furlong, but he's won nicely. They went a bit quick and they got tired in front of him. He's been a great servant and hats off to him.”

The Tin Man had been second to Quiet Reflection (GB) (Showcasing {GB}) in this in 2016 and third to Harry Angel 12 months ago, after which he ran fifth when never happy on the soft ground attempting to defend his title in Ascot's G1 Qipco British Champions Sprint. Without a prior win on ground easier than good, the veteran had continued to finish with real effect at the business end of his races and was just over a length fourth in the June 23 G1 Diamond Jubilee S. he had won a year earlier. While the jocking-off of Queally, who had ridden him in all but the first of his career starts, was not explained to the media, it is unlikely that it was due to his riding of this hold-up performer who always needs a slice of luck in running. When a rider is in a rich vein of form as Murphy is currently, the gaps tend to open themselves and he enjoyed a charmed run through this race once the contested pace began to falter. Murphy, who was registering a fifth group 1 win since early July, was quick to brush away any praise in typically humble fashion. “He's very laid-back and an easy ride. No horse enjoys this kind of ground, but he's by Equiano and they usually do. The team have done a wonderful job with the horse and I was just lucky enough to ride him today. He didn't travel and I got him going a bit sooner than ideal in hindsight, but he won anyway.”

The returning 6-4 favourite Harry Angel was again upset in the stalls, but broke on terms unlike in the Diamond Jubilee and after he had faded out of contention to be sixth jockey Adam Kirby was blaming the testing ground for the disappointment. Kevin Ryan said of Brando, “I think he was the forgotten horse of the race. He'd been running really well and then he comes up with one average race and some people ignore him. He travelled into the race great. They have gone pretty hard up front and he's done everything right, it's just on the day.” Aidan O'Brien said of Gustav Klimt, who was producing a career-best over the shortest trip he had encountered since his juvenile debut, “We were delighted with our horse, a three-year-old on that ground. It was his first run back at six. The first two are two very solid older horses.”

The Tin Man had already eclipsed his high-class half-brother Deacon Blues (GB) (Compton Place {GB}), also the winner of the Qipco British Champion Sprint S. in its inaugural year as a group 2. The dam Persario (GB) (Bishop of Cashel {GB}) is a half to the stable's triple G3 Leicestershire S. winner Warningford (GB) (Warning {GB}), who was also runner-up in the G1 Lockinge S. She has the 3-year-old filly Indian Tygress (GB) (Sepoy {Aus}) who scored at Kempton on Friday evening, the twice-placed 2-year-old colt Global Warning (GB) (Poet's Voice {GB}), an as-yet unnamed yearling colt by Muhaarar (GB)–who had The Tin Man back in fourth in the 2015 G1 Qipco British Champions Sprint–and a foal full-sister to The Tin Man.