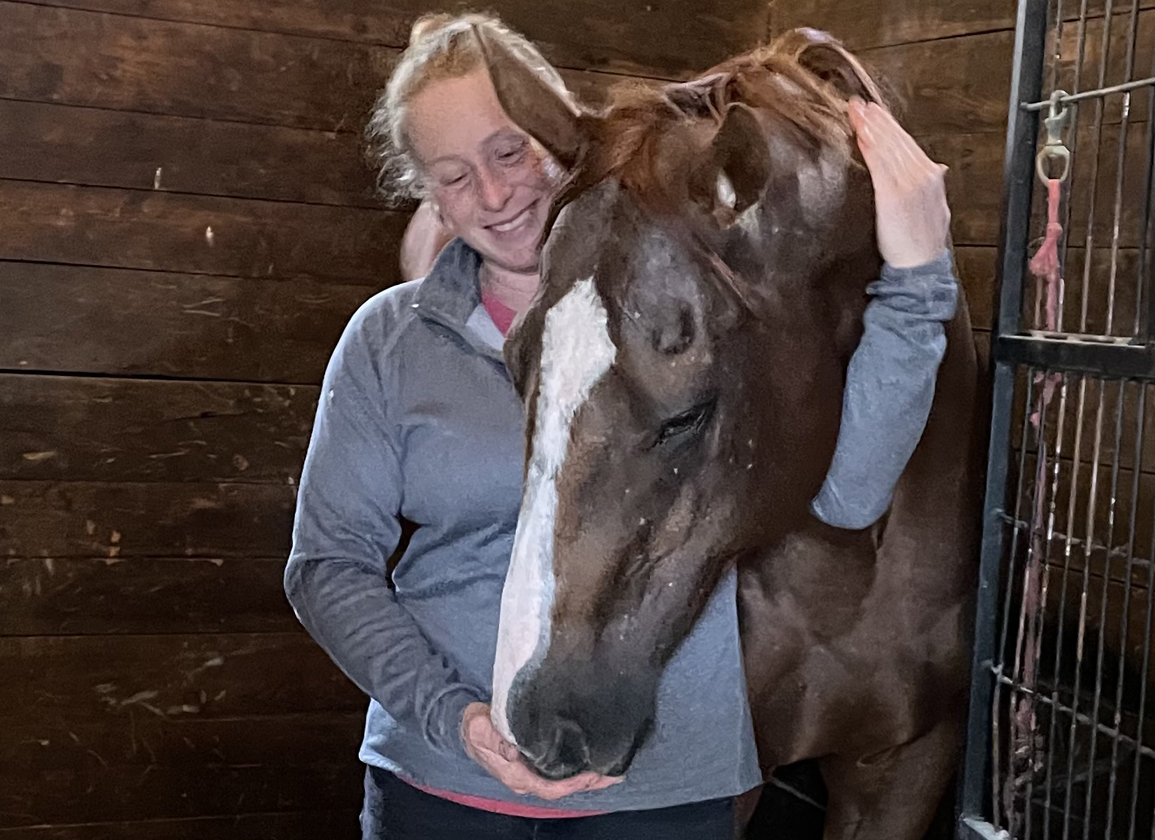 SARATOGA SPRINGS, NY-Some 15 hours after he suffered a career-ending injury, Whitmore (Pleasantly Perfect) was being Whitmore Sunday morning. Acting like he was quite ready to run in another Grade I at Saratoga Race Course, the 8-year-old was positioned in the front of this stall, alert, active and on the prowl for a carrot or a piece of candy.

During the gallop-out past the wire of the GI Forego S. Saturday afternoon, jockey Joel Rosario noticed something didn't feel right and pulled the champion up. As a precaution, he was vanned off, taken back to trainer Ron Moquett's barn and examined. The X-rays showed a minor injury, an apical fracture in his lower left foreleg. Moquett promptly decided that the Forego, the 43rd race of Whitmore's distinguished career, would be his last.

“He would easily come back and run,” said Laura Moquett, who trains the stable with her husband and is Whitmore's exercise rider. “The vet that took the pictures last night was basically like, 'He'll come back and run like a 100%.' But Ron immediately said, 'No, he won't. We're not doing this.'”

About 100 yards away from where Essential Quality was being saddled for his victory in the 152nd GI Runhappy Travers S., the Moquetts were in the midst of the bittersweet period. Their life-changing horse, a fan favorite who won the GI Breeders' Cup Sprint and an Eclipse Award last year and earned over $4.4 million, was finished with competition. But he was safe.

Ron Moquett checked on his ornery gelding before dawn Sunday and headed back to Kentucky and then on to Arkansas, as planned. Laura Moquett was at the barn, handling interviews and welcoming people who wanted to stop by, see Whitmore and thank him for the memories. She said her husband was dealing with the injury and retirement.

“He's sad, but he's really also relieved and happy that he's fine. That's the key,” she said. “We love racing, but we love horses before we love racing. As long as they're fine, we don't get too worried about whether they run again or not. That's the key to racing right? It's a very short window.”

Laura Moquett said she was distracted by the incident in the stretch of the Forego when Firenze Fire savaged eventual winner Yaupon and took her eyes off Whitmore. As she began running down the track to where Whitmore was being tended to in the first turn, she realized he was not in serious trouble.

“I saw him walk like two steps,” she said. “When they were trying to hose him off he was kind of walking in a circle. As soon as I saw him take the two steps, I was like, 'We're good. He's injured, but it's nothing catastrophic.”

Her long-distance analysis was correct. The X-rays showed the fracture at the top of the sesamoid.

“It's just like a little piece, where his suspensory attaches,” she said. “They may not even choose to take it out. It's not in the ankle. It's the two bones on the backside. It's where the suspensory is attached, so when they stand they've got structure. It's connecting his foot to his back of his leg.”

The X-rays were sent to Dr. Larry Bramlage at Rood and Riddle in Lexington for review and to determine whether surgery is needed.

Regardless, Laura Moquett said that when Whitmore's recovery is complete she will enter him in the Retired Racehorse Project (RRP) to be retrained. She expects he will learn to be a jumper in the show ring. She said she was not sad Sunday morning, “because I'm going to have him. Now it's just the next career, right? He's going to have a little layoff and then he's going to start his new job. So that's just a different structure.”

While Whitmore will stay with the Moquetts, his disposition may preclude him from working in the stable.

“He kicks a lot, so I don't think he'll be a pony,” Laura Moquett said. “He's not a biter, but he is nasty with his hind end. I don't know if he'll be able to do pony work. We'll see. I would love to have him on the track every morning. It would be so fun. If he goes on to be a jumper, I'm basically the only one that'll be around him instead of having all the guys keep tabs on him and stuff. They'd like to keep him around, so it would be cool to have him be a pony.”

Ron Moquett purchased the unraced 2-year-old named Pleasant Mel in a private sale for $37,000 and renamed him Whitmore after one of his high school teammates. Whitmore did run in the 2016 GI Kentucky Derby, but came out of the race with an injury. Since his return to racing several months later, he has been a sprinter.

Whitmore won 15 times and finished in the money 33 times. His victory in last year's Breeders' Cup Sprint at 18-1 carried him to the Eclipse Award.

Laura Moquett said that when her husband announced Whitmore's retirement Saturday night on social media, the reaction was immediate and intense with fans wishing him well.

“That's so cool,” she said. “They love him because he's just a hard-knocking guy that tries hard every time. He hurt himself and finished fifth and a Grade I, his last one. That's kind of incredible.”