Sportsman's Sale Closes On A High 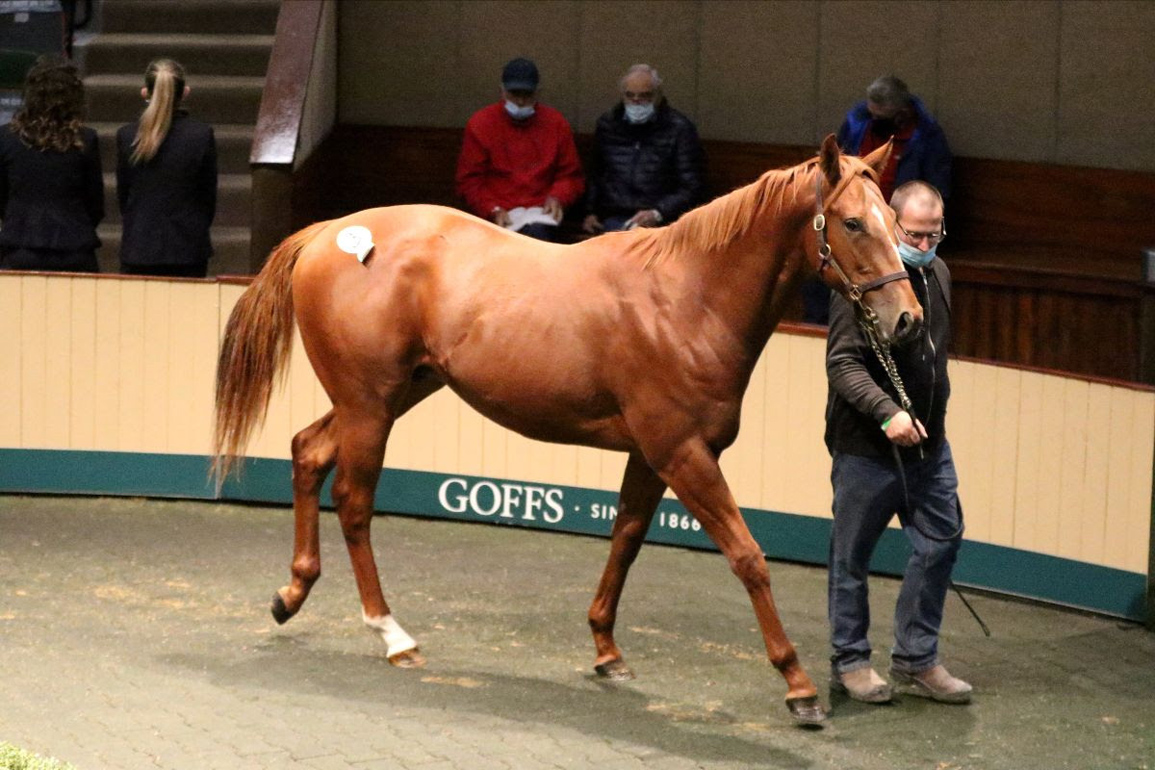 The conclusion of the two-day Goffs Sportsman's Sale on Friday marked the end of a strong four days of trade at Goffs's Kildare Paddocks, with both the Orby and Sportsman's Sales rebounding from difficult 2020 renewals–when forced to move to Doncaster–and posting significant gains.

British-based agent Alex Elliott and American-based agent Ben McElroy were active at both Orby and Sportsman's, and they were the purchasers of Friday's most expensive lot, lot 719, a €100,000 colt by Belardo (Ire) who is bound for the U.S.

“He's going to Wesley Ward and the aim will be Royal Ascot so expect to see him at Keeneland next April,” said Elliott. The first foal out of the winning Tough Spirit (Ire) (Iffraaj {GB}) was offered by his breeder Denis McDonnell's Parkway Farm. McDonnell had purchased Tough Spirit carrying this colt for €40,000 at Goffs November in 2019.

The strength of the sale continued through to the very end, with the third-last lot through the ring commanding the session's second-highest price of €95,000. That was lot 854, a colt by Galileo Gold (Ire) from Vinesgrove Stud, and he was bought by Peter Nolan Bloodstock with trainer Noel Meade. Nolan outbid Tally-Ho Stud, which stands the young Group 1 sire Galileo Gold.

“We thought he was the outstanding horse of the day but we didn't intend giving that for him,” Nolan admitted. “We took on Tony O'Callaghan so we knew we were in the right ballpark then. He's a beautiful horse and the second one by the sire we have bought this year and we love him. He's for an existing owner in Noel's and hopefully he'll be lucky.”

All horses sold through the Sportsman's Sale were eligible for the 2022 €100,000 Goffs Sportsman's Challenge, which will be run at Naas over six furlongs in September, and that is the race trainer Johnny Murtagh is targeting for lot 831, a New Bay (GB) colt he picked up on behalf of Tony Smurfit for €75,000. The colt is a half-brother to two listed-placed horses, including this year's Coral Distaff and Flying Fillies' S. third Glesga Gal (Ire) (Lope De Vega {Ire}).

“He is a brother to a good horse and we are excited by him,” Murtagh said. “He looks a sharp 2-year-old type and one we will aim at the Sportsman's Challenge race. He comes from a good farm and we are very happy with the horses we have bought here this week.”

Upon conclusion of the Sportsman's Sale, Goffs Group Chief Executive Henry Beeby said, “And it rolled on. We are delighted that the Sportsman's Sale continued the vibrancy and tone of the Orby Sale with two days of strong, vibrant and lively trade. Once again we are indebted to our vendors who backed the sale with a really good commercial catalogue and were rewarded by a huge crowd of potential purchasers hungry to buy from start to finish. They were attracted by the individuals, the addition of the €100,000 Sportsman's Challenge and the added bonus of the superb new IRE Incentive Scheme that provided €10,000 vouchers only redeemable at Irish yearling sales to the winners of a bunch of races throughout the season. This excellent initiative has made a major impact and encouraged trainers in particular to engage with the Sportsman's Sale which is to the benefit of Irish breeders who chose the second part of The Irish National Yearling Sale for their yearlings.

“Once again this week has clearly demonstrated that Goffs can and will provide a vibrant market for every level of yearling from the blue bloods at the top across the spectrum to the sharp commercial types often referred to as 'trainers' yearlings.' Of course, Orby was headed by the millionaires but it is equally pleasing to see Sportsman's topped by a trio of six figure lots which drove the huge rises in each statistic. We are grateful to every vendor and each purchaser and have been so pleased to welcome new faces here for the Sportsman's Sale to join those who stayed after Orby. All of them have been enticed by the Purchaser Attraction Team at Goffs, our network of international agents and the proactive team at Irish Thoroughbred Marketing. These three groups combine sale after sale in a way that is quite unique and ensures that our clients are able to conduct their business in the most customer friendly sales complex whilst enjoying the kind of welcome that can only be found in Ireland.”