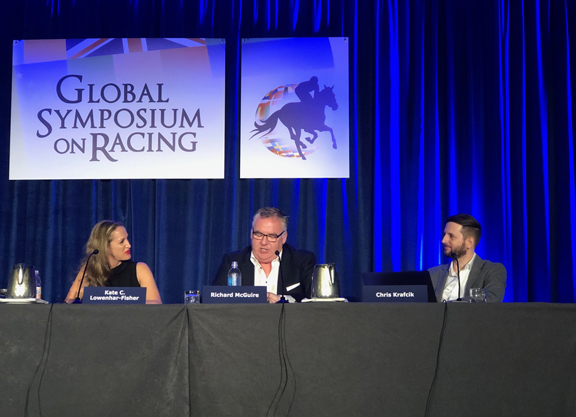 “Sports betting is an incredible opportunity to diversify your business. The time is now. You have everything in place to move sports betting forward.”

That's the message that Richard McGuire, Executive Chairman of SportTech PLC, delivered to attendees at the Global Symposium on Racing in Tucson on Wednesday.

Although McGuire acknowledges that there has historically been a disconnect between sports betting and horse racing betting, he predicted that there will be a “shared wallet” allowing customers to easily bet sports contests and pari-mutuel horse racing.

“The customer will demand it,” McGuire emphasized.

He added a cautionary note that how sports wagers are structured is critical.

“As soon as you overtax, you can kill your market,” McGuire said. “Participants will bet less or head to the illegal market. If too many hurdles are placed in sports betting, your customers will go to the off-shore operations, which are quite vibrant. Horse racing and sports betting can coexist if the two are fully integrated.”

He pointed to Portugal and France as two countries with have high tax rates, which has created a strong demand for illegal betting markets there.

“Racetracks have the infrastructure to offer sports betting, and I would encourage tracks to do that,” he told the audience of several hundred attendees.

McGuire was one of three speakers on sports wagering that kicked off the second day of the symposium. Each one emphasized that the mobile platform is where sports betting will land.

Kate Lowenhar-Fisher, a gaming lawyer with Dickinson-Wright PLLC in Las Vegas, added that she hated to throw cold water on the enthusiasm but reminded attendees of possible pitfalls.

“Sports betting has hovered for years as the golden goose,” she said. “The economics of sports betting is no mystery. Sports books can be profitable or they can be murdered, depending on the regulatory environment. They have never been big money makers. There's a lot of risk involved in operating a sports book. They operate with very narrow margins. A sports book is mostly an amenity to casino customers.”

She agreed with McGuire that the profitability of a sports book depends on taxes and fees.

“Operators see sports betting as the Golden Goose,” continued Lowenhar-Fisher, “But that's not so. My advice is that if your taxes and fees are in excess of Las Vegas, you might be in trouble.”

She also echoed McGuire in saying that customers can easily bet through illegal markets if they offer a better deal.

“The more efficiencies you can create in a sports book, the better,” she stated. “My takeaway for racetrack operators is to be mindful of all the business killers you might encounter.”

The panelists agreed that sports betting will spread to other states but that tax rates and licensing fees in each state will vary, and that will affect profitability. Pennsylvania was singled out as a state having high taxes and fees to help the state plug budget gaps.

In a separate panel on sports betting, Scott Finley of the French betting organization PMU, conceded that sports betting is not going to happen overnight, but the racing industry must be part of the discussion.

Finley agreed with Lowenhar-Fisher in emphasizing that sports betting is not like racing.

“You can lose money taking sports bets,” Finley said. “It's not like sitting back and taking a percentage of pari-mutuel handle.”

Bill Knauf, VP of Business Operations for Monmouth Park in New Jersey, gave the background of the court case which ultimately went to the U.S. Supreme Court and was decided 6-3 in favor of sports betting on May 14 of this year. Monmouth opened its Sports Book by William Hill exactly a month later.

It was opened in a renovated pari-mutuel area in the grandstand, and a sports bar was added nearby. Handle on Monmouth Park's races went up significantly. (Sports betting not only came to Monmouth Park in New Jersey, but also to the Meadowlands and Atlantic City casinos.)

Knauf said that the advantage of locating sports betting at tracks is that they are already the site of state-regulated gambling and they have ample parking and interior space, plus TV rooms with multiple channels.

“We can show 60 sports games at once,” said Knauf. “No sports bar around us can do that.”

Scott Duruty, a vice president with The Stronach Group, asked symposium attendees, “Is sports betting a friend or foe?”

The answer, Duruty says, depends on who you ask and what jurisdiction that person is from.

He said that The Stronach Group has not yet entered the sports betting market, but certainly has examined it carefully in four states: California, Florida, Oregon, and Maryland. It looks like a longshot in California, Duruty conceded. A proposed bill on sports betting did not move past committee in the past legislative session.

“The tribal interests in California are not interested in online or mobile sports betting,” he said. “They just want to get customers to their casinos.”

He acknowledged that California is a large and lucrative market, but racetracks face significant challenges in the quest to offer sports betting there.

no additional casino gambling without a ballot issue.

He said many people thought that the recent vote diminished the hopes for sports wagering at racetracks, but he emphasized that sports betting in Florida is still unresolved.

Oregon scrapped sports betting in 2007 and that future participation by racing and tribal casinos is far from clear. Duruty said that if sports betting comes to Oregon it will may be operated by state lottery.

“I don't see much chance for tracks in Oregon,” he admitted.

He is far more positive on Maryland, and thinks that soon sports wagering will come to land-based casinos and racetracks.

“Sports betting in Maryland will require a statewide vote,” Duruty said. “Polls show approval, but voters must wait until legislation is approved. It would be very beneficial in Maryland.”

He's confident that sports betting will attract customers who also will be attracted to betting on horses.

Horseplayers were the focus of a lively session in which tracks came under strong criticism from core customers. Attendees heard impassioned pleas for racing to listen to racing fans and to treat them better.

Chris Larmey, chairman of the NHC Players Committee of the National Thoroughbred Racing Assn., said, “Racing is dying one horseplayer at a time.”

He said racing's core product is “the bet” and says that product is overpriced.

“Takeout is too high in general,” he said, “Maybe not in all cases, but the serious players have to make a long-term profit. The price of betting–the takeout–is a big deal. The price of playing is much lower in sports betting. So takeout is a real challenge to the racing industry. If you don't reduce takeout, it will slowly eat away at racing.”

Larmey said that every track's goals should be to present large and competitive fields for customers to bet.

Larmey said that there are a lot of easy fixes and wonders why racing hasn't addressed those problems.

“Do you not care about the customer?” he asked pointedly.

He mentioned that racing's tote system has been patched over many years but the basic infrastructure is the same as 25-30 years ago.

“Where is the innovation in player experience?” Larmey asked.

Larmey also criticized the video presentation of racing, saying, “In the last five years, I have watched many sports events in high-definition…except for racing. Horseplayers watch races. They watch replays. They need high-definition technology.”

Michael Amo, a member of the New York Racing Fan Advisory Council, said, “Fans are more than customers and players. They are stakeholders, too.”

Amo said that tracks have forgotten fans and emphasized the need for more state racing councils to serve as a voice for fans. He strongly believes that fans should be represented on organizations that govern racing. If tracks respect and listen to fans, it will give them a sense of ownership in racing to help grow the sport.

“Excluding fans will certainly not give them a sense of ownership,” Amo said.

He was emphatic in the need for racing to change. “We cannot solve our problems with the same thinking we used when we created them,” Amo said.

Patrick Cummings, Executive Director of the Thoroughbred Idea Foundation, cited the issue of breakage as one way that the customer is being cheated by racing.

“Breakage is the difference between what winning bettors should receive on winning bets, and what they actually receive,” Cummings said.

In this year's Triple Crown races, there was almost $1 million in breakage not paid to bettors.

“Takeout rates are actually higher in racing than published because of breakage,” Cummings said. “Breakage has been unchallenged for 90 years. We have to treat racing's core players with respect. Breakage is retained by tracks, and that's no longer necessary.”

Cummings advocated that reducing penny breakage would eliminate minus pools and would create a massive stimulus for horseplayers, and that money would ultimately go back to owners and horsemen.

Cummings criticized racing for its lack of innovation.

“Horse players are not happy with the status quo,” he said.

Speaking from the track management perspective, Matt Vance of Remington Park in Oklahoma emphasized that Remington is not a track that values gaming customers over horseplayers.

“We've been adamant about keeping horse racing relevant in our Remington Park operation,” he said. “From day one, it was key that we maintained that crossover. We wanted to showcase racing. We are lucky in Oklahoma because our gaming license is dependent on horse racing. Our racing commission understands the importance of keeping horse racing relevant. We have to keep the core player interested, and yet still get the new people coming to the casino to cross over to racing. We try to cross-promote both the gaming and racing. We worked hand-in-hand with our horsemen and it's a partnership with us.”