Home » Archive » Shared News » Sports Betting and Racing: After Jersey, Then What?

Sports Betting and Racing: After Jersey, Then What? 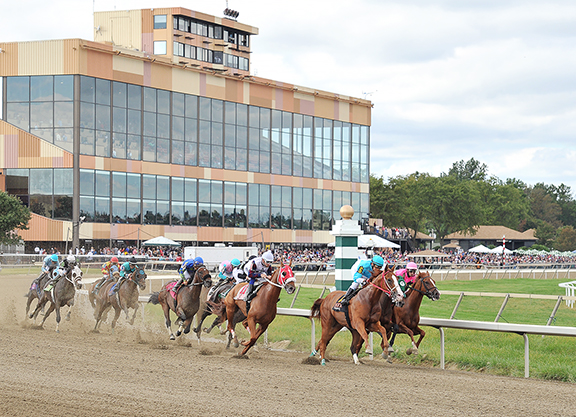 Barring any more political or legislative bumps in the road, the new target date for opening up a sports book at Monmouth Park is the second week in June. But while the focus has been on Monmouth, a handful of other states with racing are poised to begin accepting sports wagering as well, and some are very close. In fact, there is some speculation that Delaware Park, and not Monmouth, could be the first Thoroughbred track to take single-game sports bets.

With laws having already been passed in Delaware, West Virginia and Pennsylvania to allow sports betting, experts predict those states will fall closely in line behind New Jersey. Mississippi is also close to opening sports books, but there are no racetracks in that state. While several other states are expected to eventually legalize and open sports books, most need to still clear political and legislative hurdles before being able to do so.

A look at the three racing states, beyond New Jersey, that are ready to go with sports betting and what that may mean for racing there:

1) Delaware: Delaware was in a unique position in that it already had a limited legal form of sports wagering prior to the Supreme Court striking down the Professional and Amateur Sports Protection Act as unconstitutional. Delaware's racetracks–Delaware Park and the harness tracks Dover Downs and Harrington Raceway–have been allowed to take parlay bets on sporting events, but not single game wagers. Because the limited form of sports betting already existed in the state, Delaware's Governor and Attorney General have announced that they see no reason they cannot implement full-fledged sports betting as soon as possible. No date has been given as to when the racetracks will be allowed to start taking sports bets but expectations are they will be up and running before the end of June. There are no standalone casinos in Delaware.

Delaware's horse racing industry is also well-positioned to benefit from sports betting because Delaware is the only state where sports betting laws are in place that require part of the profits to go to purses. According to Delaware Thoroughbred Horsemen's Association President Bessie Gruwell, 9.6% of the revenue from the parlay bets go to purses and that will not change for single-game bets, which are much more popular with gamblers than the parlays.

“One thing I will say about the State of Delaware, once we started with the video lottery terminals, we've been fortunate enough that we also share in table game revenue and sports wagering revenue,” she said. “The only things we don't share in are lottery and keno. The State of Delaware has certainly recognized the horseman as a partner. It's the state, the horsemen and the casinos.”

Gruwell says she has no idea what to expect when it comes to how much money will be pumped into the purse account through sports betting and says she has heard estimates that range from the same $500,000 cut from the parlay bets they currently receive to $10 million.

She also speculates that, over time, the money will go down.

“I think this will mean better days are ahead for Delaware Park for a two to three-year period,” she said. “That's because we're going to be up and running before some other states. Then I think we'll have the same thing happen that happened to our casino. We had a good solid 10 years where our only competition was Atlantic City. Once Philadelphia and Maryland came on board, we really got saturated.”

West Virginia: West Virginia passed the West Virginia Sports Lottery Wagering Act in March. The law permits the state's five gaming facilities, which include Charles Town and Mountaineer Park, to offer sports betting under the lottery's oversight. The state is now formulating rules and regulations covering sports betting and the plan is for it to be up and running in the Mountaineer State by the beginning of the NFL season. As is the case with most states that have passed sports betting legislation, there is nothing in the legislation that requires the track owners or casinos to give any money to purses. Charles Town is owned by Penn National Gaming and Mountaineer is owned by Eldorado Resorts.

Though neither company has any incentive to push some of the sports betting profits into racing, Randy Funkhouser, president of the Charles Town HBPA, remains hopeful that track owners will put some of the money into purses, calling it “the right thing to do.”

“I don't know what they plan to do,” Funkhouser said. “It was years ago when [Penn National] came and bought Charles Town and the horsemen got behind them. There were some problems with the previous owners. We welcomed them and we worked hard to make it happen. Since then, they have been extremely successful here. I know corporations are not eager to part with their monies, but people have worked very hard to give them the opportunity to run a successful business at Charles Town. This has always been the cash cow and they need try to help the horsemen who have really suffered terribly over the last few years. That's the way I run my business and so do most horsemen. If they do well, they share the wealth. We're not asking for huge amounts, but would like something to get our purse levels back to where people can make a living.”

Charles Town, like all racinos, is also about to faced with a new problem once sports betting is unveiled. If the horsemen get cuts from all the other casinos games and not from sports bets, what happens if sports betting siphons money away from slots, etc.?

“Yes, that's a worry,” Funkhouser said. “Any time you put another form of gambling underneath the same roof, you're certainly taking away from the other forms of gambling. That's just the way it is.”

And while Funkhouser hopes that Penn National will help out the horsemen even though it is not obligated to do so, he is realistic about that being a longshot.

“I'm a little bit dubious because corporations are greedy people,” he said.

Pennsylvania: Pennsylvania legalized sports betting when it passed a bill in 2017 allowing for a widespread expansion of gaming throughout the state. According to Sal DeBunda, the president of the Pennsylvania Thoroughbred Horsemen's Association, sports betting will not take place in the state until the Gaming Control Board issues a set of rules and regulations. There is no timetable on when that will happen.

Another problem is that Pennsylvania's laws call for what is an extremely high tax rate (36%) on the winnings from sports betting and a $10 million fee to be awarded a license. By comparison, the tax rate on sports bets in Nevada is 6.75%. That has led to speculation that the Pennsylvania tracks and casinos will not open sports books until being able to negotiate more reasonable fees and taxes. But DeBunda believes the tracks will not wait and will open sports books as soon as possible.

There are few, if any, signs that sports betting will be a boon to Pennsylvania racing. When it comes to gaming, the purse account gets money from slot machines only, and every time a new form of gambling has been approved in the state, the horsemen have not been able to negotiate a cut.

“The legislature in Pennsylvania doesn't seem to understand how important it is to keep racing going,” DeBunda said. “They're saying the money is going to sheiks and things like that, when nothing could be further from the truth. You have a legislature that thinks we're getting too much already and then we have more problems all the time because they keep approving new forms of gambling to compete with us. A lot of things are coming together at once and it gives us worry about the long-term effects on Pennsylvania horse racing.”

DeBunda believes there is a finite amount of money that people will wager in the state and that the pie is not growing. Rather, with so much gaming expansion in Pennsylvania, the slices are getting smaller. With virtually no chance that money from sports betting will go toward purses, his biggest hope is that sports betting won't take away money from slots play, which is the major funding mechanism for purses.

“Whether it's from slots, table games, sports betting, whatever, what we need from the state is a guarantee, a floor,” he said. “I don't really care where the money comes from. So far as the revenue we get, we need a floor so that people know the minimum amount of money available. To me, that would be the best thing that could happen, because then we can give a message to the breeders and owners that these are the parameters and Pennsylvania is a place where you have a good chance to run a profitable business.”