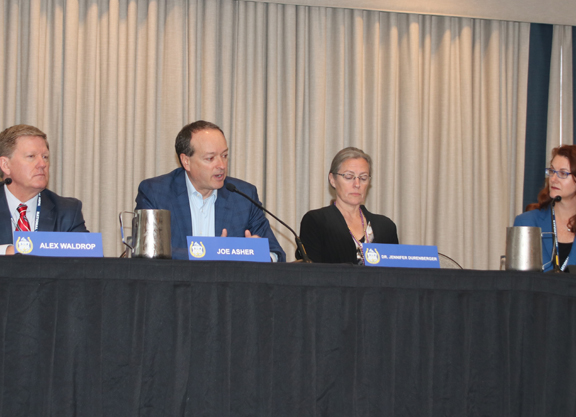 NEW ORLEANS, La.–Horsemen and racetracks should be acting now to prepare for the advent of sports betting in America. But just because racetracks understand parimutuel wagering, taking bets at fixed odds on sports requires completely different expertise.

Those were major takeaways from the sports betting panel that kicked off the National Horsemen's Benevolent and Protective Association Convention at the Astor Crowne Plaza Hotel in the famed French Quarter Wednesday. After three days of sessions on issues and developments facing horse racing, the convention wraps up Saturday morning with a meeting of the National HBPA board.

Joe Asher, chief executive officer of William Hill US, urged racing to follow the lead of Monmouth Park in pushing to legalize betting on sports. Monmouth is leased by the horsemen, who have partnered with William Hill on the sports-betting initiative.

“Until Congress gets involved, it's going to be a state issue,” Asher said. “And among the most critical decisions at the state level is who gets the license, who gets the right to offer the product. Certainly under the old legislation in New Jersey and one would think under the new legislation, the racetracks will get that right. That may not be the case in all states. Clearly, in my mind, the number one thing is to be involved in the legislative process in trying to get some form of either getting the licenses or some entree into it.”

“The number one thing you should do is be on the phone with a William Hill or somebody else who does know this business. Because this is not our business,” Waldrop said. “It's vastly more complicated and risky than parimutuel horse racing. You should not go down this road thinking this is just another case where you're going to divvy up purse money. If you're not well-advised, you could be left behind.”

The panelists, which also included industry consultant Dr. Jennifer Durenberger and moderator Michele Fischer of Sportech Racing and Digital, agreed that it's just a matter of time before sports betting proliferates around the country. The United States Supreme Court is expected to rule this spring on New Jersey's challenge to the constitutionality of the Professional and Amateur Sports Protection Act (PASPA), which for the last quarter-century effectively has made sports betting illegal except in Nevada and a few other states.

“In 2012, the idea of sports wagering throughout the United States was just a long shot,” said Fischer, vice president of sales and business development for Sportech. “The sports leagues sued the state of New Jersey to block sports wagering in Atlantic City casinos and the state's racetracks. They called it a clear violation of the federal ban on state-sponsored sports betting and threatened their integrity…Now we wait for the United States Supreme Court to potentially strike down the 25-year-old statute. During the six-year battle the momentum has changed. We've got 18 states and three governors now supporting the New Jersey case…There are close to two dozen states considering bills to legalize sports betting.”

The National Basketball Association and Major League Baseball have come out in favor of sports betting and are lobbying various states to receive a piece of the revenue, Fischer said. The American Gaming Association estimates that $150 billion is bet on sports by Americans each year, most of that through offshore bookmakers.

Durenberger noted that while the push for sports betting has similarities to racetracks' pursuit of expanding gaming, while observing that racing brings something extra to the table that resonates with lawmakers.

“You are thousands of small-business owners, and you have the privilege and the blessing to work in an industry that has economic impact for your states in very large numbers,” she said. “In my state of New York, it's over $4 billion–with a 'b.' Even in small states, it's tens of millions of dollars. Your small businesses sustain green space. You have all of the tax base, all the ancillary things that go into the agribusiness. That economic-impact argument is still very, very relevant…Your industry supports the rural economy, as opposed to a handful of franchise owners and leagues.”

The convention's keynote speaker was Clay Whitham, who runs Whitham Thoroughbreds with his mother, Janis. Whitham Thoroughbreds and its broodmare band of about 10 mares stands as a testament to patience. Their great Hall of Famer Bayakoa only had four foals–only two of which raced, only one winning a single race.

“Maybe there's something about leaving it all on the racetrack,” Whitham said. “She was a great race mare but as a broodmare she wasn't successful as a dam. But out of the two fillies that she had that we kept, they have both produced Grade I stakes winners.”

One of those was Fort Larned, the 2012 GI Breeders' Cup Classic winner out of the Broad Brush mare Arlucea. Trinity Place, Bayakoa's other daughter in the Whitham broodmare band, was sired by Strawberry Road and produced multiple Grade I winner Affluent.

“Broad Brush and Strawberry Road both had a lot of starts and were really good racehorses,” Whitham said. “They weren't the most fashionable commercial sires, but they were good tough racehorses. We try to remember that. It's easy to get excited about the latest 2-year-old champion that got retired and forget about the good, tough racehorses. But I think that's important.”

J. Curtis Linnell, executive vice president of the Thoroughbred Racing Protective Bureau, told the audience that the TRPB digital tattoo should replace lip tattoos starting in 2020. The horse identifier will scan horses' microchips to bring up their digital tattoos.