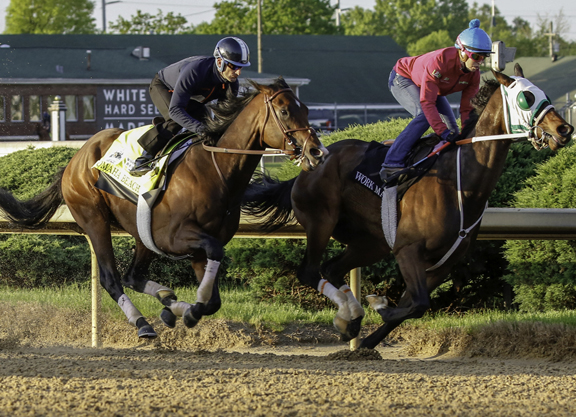 “First, I’d like to thank Rick Porter for the opportunity to stand such a special horse as Omaha Beach,” said Hughes. “We believe Omaha Beach is one of the best stallion prospects to come around in recent years and see him as a big part of the future at Spendthrift. He is truly a rare package-elite looks, pedigree, sire power, speed, class, you name it. He has everything and we feel the best is yet to come for him.

“We also think the best is yet to come for Spendthrift, and it is important to us that we continue to bring in premier stallion prospects of the likes of Bolt d’Oro and Omaha Beach to help shape our future. I wish both Rick Porter and Richard Mandella the best this week and beyond with Omaha Beach,” Hughes said.

Omaha Beach will continue to be campaigned by Fox Hill Farms and trainer Richard Mandella, and at the conclusion of his racing career he will retire to Spendthrift Farm in Lexington, Kentucky to take up stud duty, the farm said.

“I am delighted Omaha Beach will join the stallion roster at Spendthrift Farm upon the conclusion of his racing career,” said Porter. “B. Wayne Hughes and his team have a world-class operation and will provide Omaha Beach with every opportunity to become a leading sire. Omaha Beach has been a wonderful blessing to me and my family and I hope we get to enjoy many more thrills with him at the racetrack.”

Omaha Beach enters Saturday’s $3,000,000 Derby as the likely favorite after reeling off three straight wins, including back-to-back scores at Oaklawn in the GII Rebel S. in March and in the $1 million Arkansas Derby earlier this month.

Omaha Beach broke his maiden at Santa Anita in February by nine lengths, leading all the way to win in 1:21.02 over seven furlongs. He subsequently defeated two-year-old champion Game Winner (Candy Ride {Arg}) in the Rebel, and Improbable (City Zip) in the Arkansas Derby.

An earner of $1,121,800 to date, Omaha Beach is a half-brother to 2014 Breeders’ Cup winner and Champion Two-Year-Old Filly Take Charge Brandi. His second dam is three-time GI-winning millionaire Take Charge Lady, who was named Broodmare of the Year in 2013 after her son Will Take Charge was Champion Three-Year-Old Colt that same year. She’s also the dam of GI Florida Derby winner and sire Take Charge Indy.

Omaha Beach breezed five furlongs in 59 seconds on April 27th at Churchill in his final tune-up for the Kentucky Derby. He will be ridden Saturday by his regular jockey Mike Smith.