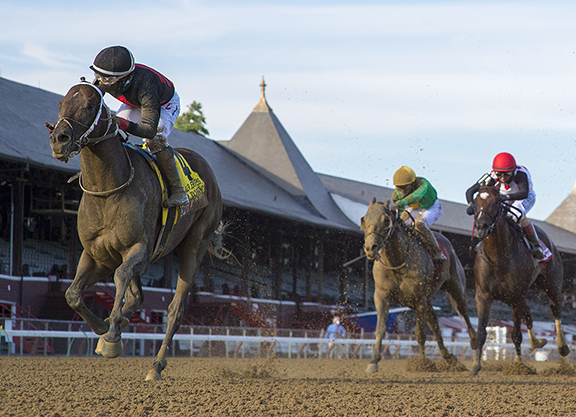 L & N Racing's Echo Town (Speightstown) registered his first win at the highest level with a 7-1 upset in Saratoga's GI H. Allen Jerkens Memorial S. Saturday. The bay raced in mid-pack early as recent GI Woody Stephens S. hero No Parole (Violence) doled out a first quarter in :22.67 with MGSW Mischevious Alex (Into Mischief) pressing from second. Mischevious Alex turned up the heat on No Parole as the half went in :45.31 and Tap It to Win (Tapit) ranged up menacingly on their outside turning for home. Echo Town swung out four wide turning for home and swiftly inhaled the top three in mid-stretch, charging clear to a dominant 3 1/2-length victory. Tap It to Win held second and 'TDN Rising Star' Shoplifted (Into Mischief) completed the trifecta. Favored No Parole faded to ninth.

“He ran an excellent race,” winning trainer Steve Asmussen said. “It's extremely significant winning the Allen Jerkens. Ricardo [Santana] did a great job with him today. I think the timing for him was better going into today than the Woody Stephens, and he showed it today. I thought 22 and 3 was soft for this group. I thought Echo Town ran the race of his life and Shoplifted, who was second in the [GI] Hopeful last year here obviously likes this track.”

The Hall of Famer continued, “It was great to see him put it all together when it matters so much on this stage. He ran solidly here. He ran really well into the Woody Stephens, but I thought the timing of this race was better.”

“He broke really sharp today and when the dirt started hitting him in the face, he was jumping a little bit but he was really comfortable,” Santana said. “I took him outside and he gave me a nice kick at the end. He was traveling really well. I knew there was plenty of speed today and I just wanted to sit behind the speed. I'm really happy with the horse.”

A debut winner at the Fair Grounds Jan. 18, Echo Town was third next out at Oaklawn Feb. 23 and returned to winning ways in the slop there Mar. 13. Missing by a head in the Bachelor S. in Hot Springs Apr. 25, he captured a Churchill Downs sprint May 25 prior to his effort in the Woody June 20 at Belmont.

Echo Town is the 18th Grade I victory for his sire Speightstown, as well as the 56th graded winner and 113th black-type scorer for the WinStar stallion. Out of GSW Letgomyecho, the winner is a half to Grade III victor J Boys Echo and GSP Unbridled Outlaw (Unbridled's Song). The 18-year-old mare is also responsible for the 2-year-old colt Burrow (Candy Ride {Arg}), a $200,000 OBSAPR buy; a yearling filly by Gun Runner; and an American Pharoah filly born May 8 of this year.