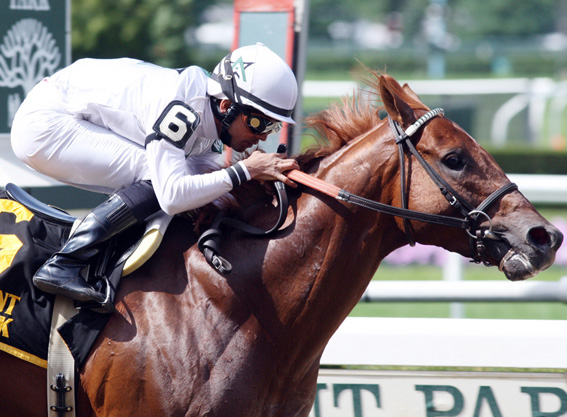 Speightster (Speightstown), an undefeated 'TDN Rising Star', will make his long-anticipated return in the Grade II Churchill Downs S. as one of a litany of contenders in the 82nd renewal of the seven-furlong test. The WinStar Farm homebred has been laid up since July 4, when he beat GI Breeders' Cup Juvenile winner Texas Red (Afleet Alex) by 2 1/2 lengths in Belmont's GIII Dwyer S. to run his record to 3-for-3. The chestnut colt recorded a series of strong breezes at trainer Bill Mott's winter base of Payson Park before getting in a local four-furlong spin in :47 Monday.

The one-two finishers in the Apr. 9 GI Carter H. at Aqueduct reunite in David Jacobson and Southern Equine Stable's morning line favorite Salutos Amigos (Salute the Sarge) and Richard C. Pell's emerging division contender Calculator (In Summation). The former earned his first Grade I score in the muddy Carter when nailing the latter in the final jump by a head.

Katherine G. Ball's Limousine Liberal (Successful Appeal) is a runner on the rise for trainer Ben Colebrook. The gelding was second in the GI King's Bishop S. behind Eclipse Award sprint champion Runhappy (Super Saver) with only two starts under his belt and more recently made a smashing 4-year-old debut when breaking the 6 1/2-furlong track record at Keeneland Apr. 9.

C R K Stable's Kobe's Back (Flatter) will be running late. The gray 5-year-old comes into this off back-to-back wins in a pair of Grade II events at Santa Anita and completed his preparations with a sizzling bullet five furlongs in :58 1/5 Apr. 30 in Arcadia. The third and fourth finishers in Apr. 9's GIII Commonwealth S. at Keeneland, Holy Boss (Street Boss) and Barbados (Speightstown), also rate chances, while longshot Catalina Red could be live in his first start for the potent Jorge Navarro barn.