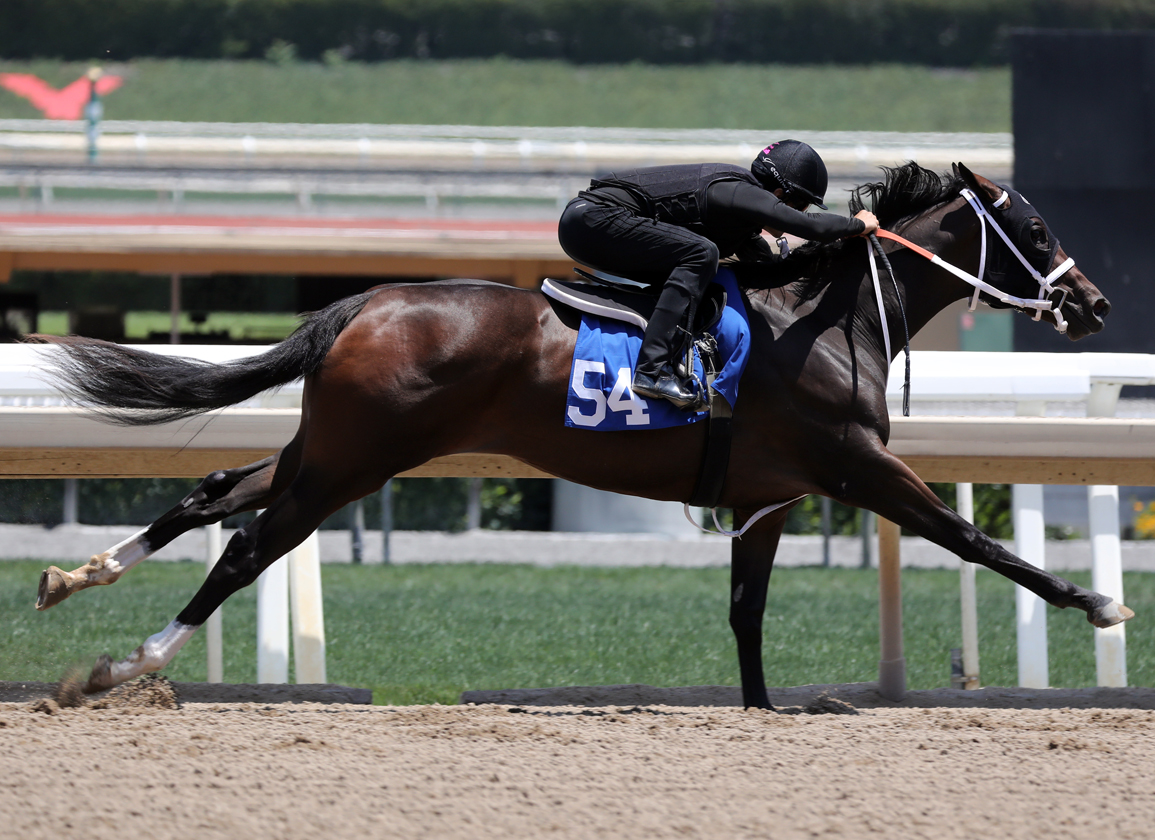 Luis Garcia's L G consignment sent out the bullet furlong and quarter-mile workers during the under-tack show for the Fasig-Tipton Santa Anita 2-Year-Olds in Training Sale in Arcadia Monday. A colt by Speightster (hip 109) worked the day's fastest furlong of :10 2/5, while a filly by Cupid (hip 54) turned in the day's fastest quarter-mile of :22 flat.

“I got him after the [OBS] April sale–he was with someone else there–and we made the decision to bring him out here,” Garcia said. “He has talent and he's been improving. He worked really well and we are very happy with him.”

Garcia is consigning the colt on behalf of TNT Equine Holdings, which purchased him for $30,000 at last year's Keeneland September sale. The juvenile was a late supplement to the Fasig catalogue.

“He's an athletic-looking horse,” Garcia said. “You can tell he has speed. He looks like a Quarter Horse. It was kind of a late decision to bring him here because he had a little bit of sore shins after the April sale, so we had to take care of that. I made the decision at the last minute–I was just waiting to make sure he was sound. I just wanted to make sure he was ready.”

Hip 54 is out of Wild Mocha (Medaglia d'Oro), a half-sister to multiple graded stakes placed Zultanite (El Corredor). The filly was purchased by Valentin Jimenez for $13,000 at last year's Keeneland September sale. Consigned by Jimenez's Bold Arrow Thoroughbreds, she RNA'd for $45,000 following a :21 2/5 work at the OBS April sale.

“She RNA'd at OBS with Bold Arrow and he sent the filly to us to sell out here for him,” Garcia said. “She worked a quarter at OBS and I breezed her a couple of three-eighths back home. She was always sound and she was ready to go a quarter. She is a long, nice filly. She's ready to go.”

Garcia has been galloping his consignment over the past week and said he was happy with the condition of the Santa Anita track.

“I thought the track was pretty good and safe,” he said. “It was a little heavy for everybody, but I think it's safe. I gallop my horses, so I was galloping them over it the last week. It's soft and I think it's pretty good for the horses.”

Garcia will be offering his first consignment at the second renewal of the Fasig Santa Anita sale Wednesday.

“It's the first time I came here to California and we wanted to break the ice,” Garcia said. “We have some really nice horses here. I like it here and the Fasig team has done a great job and helped us out a lot.”

Garcia and pinhooking partner Gina Fennell enjoyed a major score at the April sale where they sold a Classic Empire colt for $450,000. The youngster had been purchased for $70,000 last fall at Keeneland. But once the partners realized they would still have horses to sell at Santa Anita, they reinvested some of their profits in a pair of colts at the Ocala auction to ship to California.

“We had horses left after April and it was kind of close to make the Maryland sale, so we decided to come here,” Garcia explained. “Since we already had a couple, my partner Gina Fennell and I decided to buy a couple more. So I bought two at April just to bring them here.”

Garcia said the under-tack show was well-attended and he was already starting to see traffic pick up at the sales barns Monday afternoon.

The Fasig-Tipton Santa Anita sale will be held Wednesday in the track's winner's circle, with bidding beginning at 1 p.m. PT