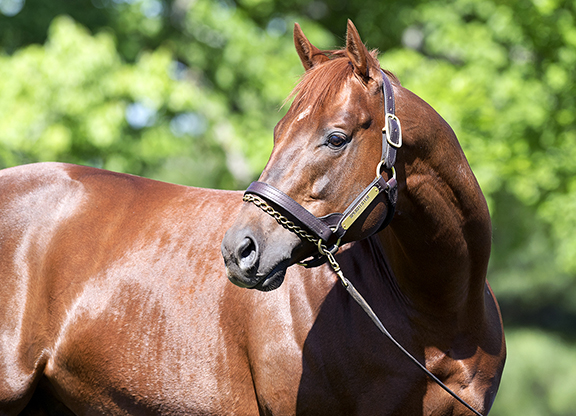 WinStar's Speightstown continues to prove himself as an accomplished sire of sires. Already, he's had four sons go on to produce Grade I winners and just in the last two years, he's seen eight additional sons, including GISW Force the Pass and the multiple graded stakes-winning Qurbaan, begin their stud careers.

In 2017, WinStar welcomed their graded stakes-winning homebred Speightster into the same stud barn as his prodigious sire.

With an initial stud fee set at $10,000, a price that has stayed in place since, Speightster has been supported with a grand total of 464 mares in his first three books.

Now into his fourth year at stud, the former 'TDN Rising Star' is presenting himself as a freshman sire to watch as his first 2-year-olds go through the sales ring and make their initial appearances in the starting gate.

A $1.1-million dollar juvenile that sold late on Friday at the OBS Spring Sale is sure to help ensure a strong start for the young stallion, but perhaps an even more promising indicator of future success could be the people signing the tickets.

“A great benchmark for a freshman sire with his first crop is the agents, trainers, and owners buying those horses,” said Sean Tugel, director of bloodstock services at WinStar. “We've seen early on that top agents like Steve Young, Jacob West, and Mike Ryan are buying sons and daughters of Speightster. To do that as a freshman sire, obviously they're making a great impact on people, both physically and as they're training.”

Although the OBS March Sale generally reflected the economic uncertainty as the Coronavirus pandemic was just reaching the U.S., three Speightster juveniles sold for six figures.

His top-priced youngster at that sale breezed in :21 2/5 and sold to Steve Young for $200,000. Consigned by Eddie Woods, the colt is out of the Smoke Glacken mare Done Smoking, who is herself a half to two graded-stakes winners.

A filly out of the stakes-winning Souper Miss (Alphabet Soup) worked :10 1/5 for the Grassroots Training and Sales Consignment. She sold for $185,000 on the second day of the sale to John Kimmel as agent for Sean Flanagan.

“She's got tremendous overall balance,” John Kimmel said of his purchase. “She has a beautiful topline and a nice walk with good over-reach. Her mind is very good for a horse that's been through the rigors of a 2-year-old sale.”

Kimmel said that he has been impressed with several Speightsters this year.

“The Speightsters weren't really ones I was pointing my attention towards going into the sales, but a combination of their racetrack performance and physical presentation really caught my attention,” he said. “There are handfuls of these Speightsters that have a very good physical presence and breeze well. If I had to be selecting a freshman sire, I would put Speightster, Not This Time, and either Nyquist or Frosted as my top three.”

A second of the Speightsters stole the show as one of the last five horses to go through the ring at this week's OBS Spring Sale. A New York-bred colt named Fortunate Son sold for $1.1-million late on Friday afternoon to agent Christina Jelm, agent for Larry Best's OXO Equine LLC.

Out of the stakes placed Indian Charlie mare Auspicious, the juvenile worked in :20 4/5 for consignor Tom McCrocklin, who purchased the speedy colt last year for $110,000 at the Fasig-Tipton Saratoga New York-Bred Yearling Sale.

The successful pinhook placed the colt as the third-highest selling juvenile of the sale, and one of only three horses to reach seven-figures.

After an exciting week for the freshman sire, Tugel reflected on Speightster's fast start in the sales ring.

“Even in the limited exposure he's had at the 2-year-old sales, he's been very well supported by buyers and has averaged 10 times his stud fee. The 2-year-olds we've seen are showing the class that Speightster had during his career.”

Unraced at two, Speightster broke his maiden on debut as a sophomore for trainer Bill Mott. The seven length-winning romp at Keeneland earned the colt 'Rising Star' status. Next he would take an allowance at Belmont over future Grade I winner Joking (Distorted Humor). One month later, he scored a 104 Beyer in his stakes debut in the GIII Dwyer S. over GI Breeders' Cup Juvenile champion Texas Red (Afleet Alex) and Tommy Macho (Macho Uno), who would go on to become a four-time graded stakes winner later in his career.

“All three of his wins were very impressionable races that really made an impact on people,” Tugel said. “Just showing his brilliance and his talent carried over to the breeding shed where he's been well supported in all four years.”

Speightster returned to his home farm in 2017 to stand alongside his sire, an Eclipse champion sprinter with over a million dollars in earnings and 18 Grade I winners to his credit.

“Speightstown is a horse that really passes on that class and intelligence, and that's what we have seen in Speightster himself,” Tugel said. “I think the ability to pass on that excellent quality of class is what really separates your top notch horses from the rest of the group.”

Speightster hails from a prolific female family that includes several champions. He is out of the unraced Danzig mare Dance Swiftly,  a sister to Hall of Fame inductee and Canadian Horse of the Year Dance Smartly (Danzig), as well as the late champion sire Smart Strike (Mr. Prospector).

Tugel said that Speightster represents the best of both sides of the pedigree.

“From day one, he was a standout physically,” he said. “When you see him come out of his stall, you can see all the great qualities that Speightstown passes on to him. But then you get to see the great qualitites his mother gave him through that Sam-Son family. He's a scopey horse, he stands over some ground, he's got plenty of leg, and he has really passed that on to his offspring.”

Speightster checked another box as a freshman sire on May 29 when his daughter Queen Arella broke her maiden at first asking for connections Roderick Rodriguez and J Stables LLC.

Following a rough start where she was bumped and squeezed between horses, the juvenile filly rallied from the back of the pack and went four wide approaching the stretch, then drew clear late to win by four lengths.

Queen Arella was bred in New York by WinStar and is out of the winning mare Unbridled Sonya (Unbridled's Song), who hails from the same family as GI Breeders' Cup Classic winner Volponi (Cryptoclearance).

A quick start for Speightster both on the track and at the sales has done nothing but increase demand from breeders sending mares to the popular young sire.

“I think that's a great acknowledgment for a young horse when you haven't got the racetrack past performances to work off to give people that confidence,” Tugel said. “But you're presenting good physicals, and you're presenting a horse that breeders like to be around. We know this horse is making a great impression on breeders and they're coming back year after year. And I think it's going to be well paid off for all the breeders here in Kentucky and around the country who have supported Speightster.”