Home » Archive » Shared News » Speed to Spare at The Shore

Speed to Spare at The Shore 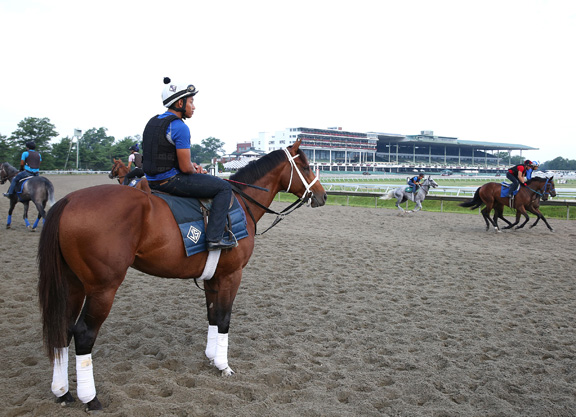 Maximum Security (New Year's Day) faces a speed-laden field of six foes as he looks to bounce back in Saturday's GI TVG.com Haskell Invitational S. at Monmouth Park, which carries a “Win and You're In” berth to this year's GI Breeders' Cup Classic. The saga the Gary and Mary West homebred has been embroiled in is well documented–a controversial DQ from first to 17th in the GI Kentucky Derby led to plenty of debate, and litigation, and the GI Xpressbet Florida Derby winner skipped the next two legs of the Triple Crown. When he did resurface in the local TVG.com Pegasus S. June 16, he stumbled at the start and couldn't hold off King for a Day (Uncle Mo) late, settling for second at five cents on the dollar.

“This race is really important in the campaign for the 3-year-old champion. The Haskell could be critical,” Maximum Security's trainer Jason Servis said.

Well-bred King for a Day, meanwhile, has every right to have a big second half of the season. The Todd Pletcher pupil concluded last year's campaign with a fourth-place run in the GII Kentucky Jockey Club S. in November, and resurfaced to dominate Pimlico's Sir Barton S. May 18. He'll have to work out a trip from the rail, but could fall into the perfect spot tucked in just behind the leaders. Todd Pletcher and John Velazquez have teamed up to take two prior Haskells, and Pletcher has three wins total in the prestigious event.

“This is a big step up from the Pegasus but he's an enthusiastically training colt, he's had three solid works and I couldn't be more delighted with the way he's coming into the race,” Pletcher said at Wednesday's post position draw.

Hall of Fame trainer Bob Baffert already owns a record eight Haskell trophies, and in-form 'TDN Rising Star' Mucho Gusto (Mucho Macho Man) gives him a solid shot at number nine. A winner of last November's GIII Bob Hope S., he was a distant second to stablemate 'Rising Star' Improbable (City Zip) in the GI Los Alamitos Futurity S. in December. An easy winner of the GIII Robert B. Lewis S. in the slop Feb. 2, he was a somewhat disappointing third at odds-on after attending a hot pace in the Mar. 24 GIII Sunland Derby going this nine-furlong distance. Some subsequent time off appears to have done Mucho Gusto well, as he took the GIII Lazaro Barrera S. sprinting in Arcadia May 18 and stretched back out effectively–and rated kindly–before besting Grade I-winning stablemate 'Rising Star' Roadster (Quality Road) in the June 16 GIII Affirmed S.

“It's a great draw for Mucho Gusto,” said Baffert of his charge's assigned post five. “Maximum Security is definitely the best horse in the race, but I like where we drew. From there [rider] Joe [Talamo] can play the break and keep him in the clear. My horse has speed.”

A total pace meltdown would likely benefit Everfast (Take Charge Indy) the most. Second in the GII Fasig-Tipton Holy Bull S. in February at astronomical 128-1 odds, he was a somewhat surprising late entrant into the GI Preakness S. off a trio of off-the-board finishes, but he belied 29-1 odds to rally from last to second in that May 18 Classic. The bay was seventh last time in the June 8 Belmont.