Speed Sires In Bolger's Plans For 2022 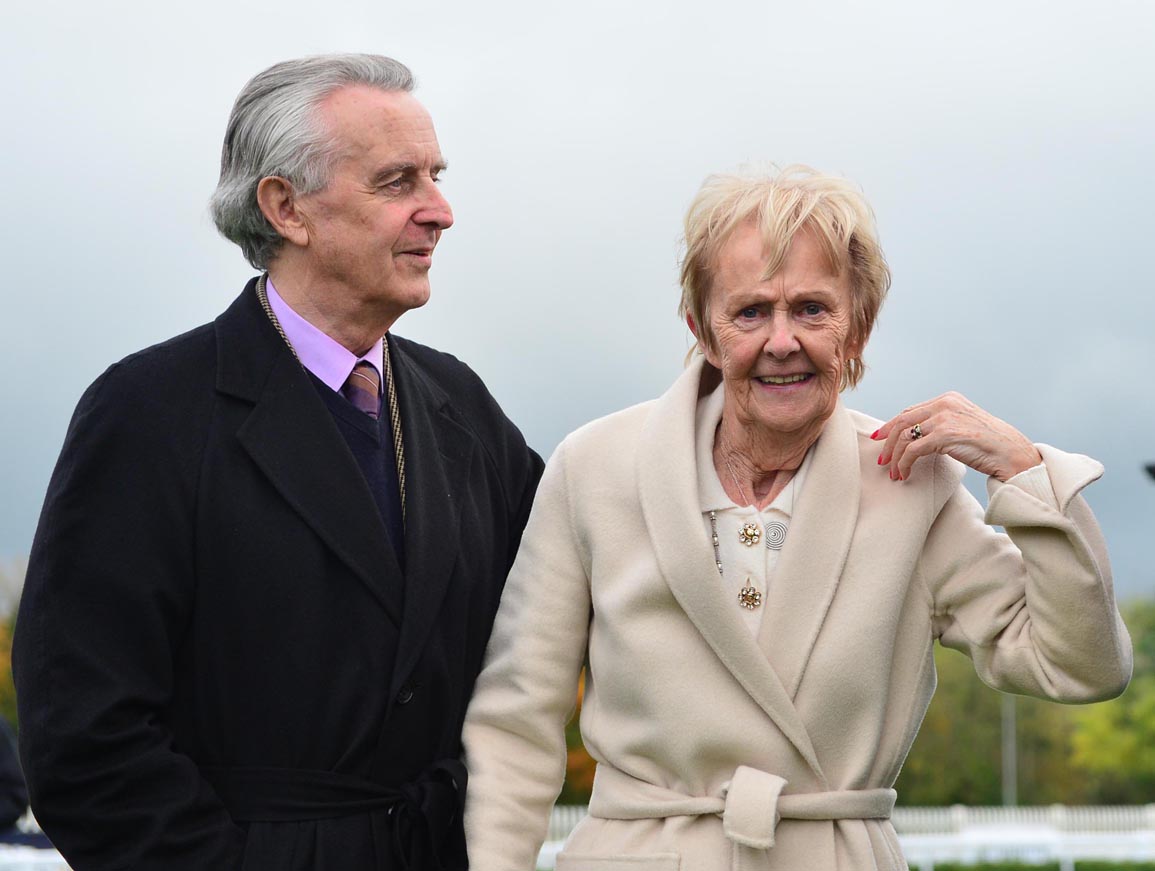 Jim and Jackie Bolger at Naas in October | racingfotos.com

As he prepares his runners for the upcoming flat season, Jim Bolger is also keeping a watchful eye on his breeding stock. The master trainer may be juggling the education of his runners with the oversight of his broodmares and youngstock, but Bolger has proven mighty adept at this kind of multi-tasking in the past: as has been well-documented, Bolger breeds many of his own runners, often going back two or three generations on both the top and bottom of the pedigree. His 2021 G1 2000 Guineas and G1 St James's Palace S. winner Poetic Flare (Ire) is by his homebred sire Dawn Approach (Ire) out of his homebred mare Maria Lee (Ire) (Rock Of Gibraltar {Ire}). He also trained Dawn Approach's sire, the Derby winner New Approach (Ire). New Approach sired Bolger's 2021 G1 Irish 2000 Guineas winner Mac Swiney (Ire), who returns for a 4-year-old campaign this year. Bolger also bred Mac Swiney's damsire Teofilo (Ire) and Mac Swiney's first two dams.

It is no surprise that New Approach and Dawn Approach, as well as Bolger's “favourite sire” Teofilo (Ire), will feature prominently in his 2022 mating plans. But Bolger is also mixing in some young, fast sires to inject some speed into his families.

Bolger, who on Christmas Day celebrated his 80th birthday, explained that while he “would have a good idea” at this point as to his mating plans, he doesn't set them in stone until after his mares foal.

“Because I have access to so many stallions, and some of them we would have used in the last covering season, we're waiting to have a look at the foals first,” he said.

Looking for “speed up to a mile”, Bolger said, he will send eight mares to leading third-crop sire Mehmas (Ire) in 2022. Also fitting that bill on his list are Profitable (Ire), Galileo Gold (Ire), Blue Point (Ire), Belardo (Ire) and Space Blues (Ire).

“We used to be told–though I don't hear so much about it in recent years–that when you're breeding staying horses you need to go back to speed every now and then,” Bolger said. “It may not get you a great result in the first instance, but the progeny of the progeny of the speed attempt could be capable of getting you a Classic horse. In recent years some of the owner/breeders have been sending their Oaks winners to Derby winners and they seem to be making out alright. Whether that will continue now or not, I just don't know. I suspect that sometime in the future with those sorts of families that those breeders will be going back and trying to inject some speed.”

“Profitable doesn't have a terribly strong pedigree himself except that he's by a very good sire and a sire of sires,” Bolger said. “He's a gorgeous horse and a very good mover, and was a very good racehorse himself.”

G1 Dewhurst S. and G1 Lockinge S. winner Belardo got off to a fast start in 2020, siring four first-crop stakes winners. The Kildangan Stud resident was quieter in 2021, with just one black-type winner, but the son of Lope De Vega has started 2022 on the right note with Bellabel (Ire) winning the Listed Blue Norther S. at Santa Anita.

“He's a nice horse,” Bolger said of Belardo. “I trained some of his family and I liked them. I felt he was a horse with a chance, so much so that I bought a share in him, and I'll continue to use the share.”

Another young Kildangan stallion that will get Bolger's support this year is the four-time middle-distance Group 1 winner and 2020 world's highest-rated horse Ghaiyyath (Ire). Bolger said he has selected the son of Dubawi (Ire) based on his racecourse merits, and also to save face with Ghaiyyath's breeder.

“He's a world champion, so why wouldn't you use him?” Bolger reasoned. “Plus, if I don't use him, Dermot Weld won't talk to me again.”

Bolger will also support a pair of young Newmarket-based stallions in Time Test (GB), the sire of four first-crop stakes winners last year, and Masar (Ire), the son of his Derby winner New Approach who has his first yearlings next year. Bolger said he has earmarked a mare by Sea The Stars he purchased at the December Sales for Time Test.

“I'm doing something that I don't tend to do, and I'm going with the mob,” Bolger said. “Time Test is one of the talking horses at the moment, and he has got off to a great start, so it would seem to be not a very big risk, and he's a great-looking horse.”

Masar won the G3 Solario S. at two and was a first Derby winner in the Godolphin blue at three, in addition to winning the G3 Craven S.

“He's a very good-looking horse himself and a very good-moving horse,” Bolger said. “You don't need me to tell you about his racing achievements, but I think he's a horse that could do very well. I'm very happy to use him; I'll be guaranteed to get horses that will be effective beyond a mile.”

Bolger will send 12 mares to his former star pupil New Approach, who like his son Masar resides at Dalham Hall Stud. Bolger is responsible for breeding and training New Approach's only two multiple Group 1 winners, Dawn Approach and Mac Swiney, and Dawn Approach, who started his stud career at Kildangan, was brought back to Bolger's Redmondstown Stud last year just months before Poetic Flare recorded his Group 1 double. Despite that, Bolger said there hasn't been much outside interest in Dawn Approach, a reality that suits him just fine.

“I don't know the reason for that, but I don't mind having the sole rights, so to speak,” he said. “It suits me fine to be able to send so many mares to him.” Bolger said he is expecting 2022 to be another good year for Dawn Approach; he has 12 to 15 homebred 2-year-olds by him in the yard, as well as others for clients. “I have a nice crop by him so I'm expecting him to do well,” he said.

The same goes for Teofilo, who will get 25 Bolger mares at Kildangan.

“He's given me two Classic winners already and I'm expecting to do well with his progeny this year,” Bolger said. “I have 2-year-olds by him and some 3-year-olds that didn't get the business done at two, so I'd be looking forward to a very good year with them.”

Bolger's stallion selections for 2022 are completed by Parish Hall (Ire), Vocalised and Verbal Dexterity (Ire), who stand at Redmondstown alongside Dawn Approach and will get “a few mares each.” And given Bolger's habit of drawing the very best from his stock as both a breeder and a trainer, any of them are fair game to produce the next big horse from Coolcullen.