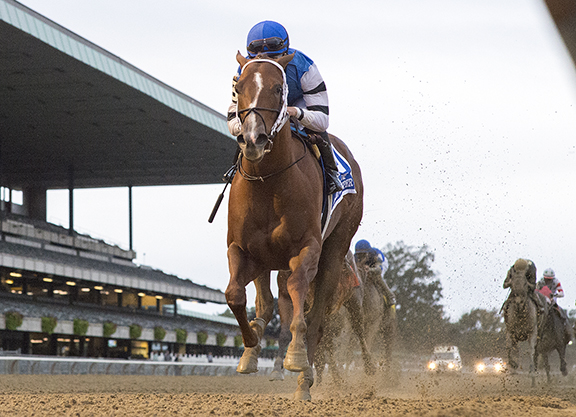 Janis Whitham’s Four Graces (Majesticperfection), a homebred half-sister to Airdrie Stud’s McCraken (Ghostzapper), is perfect in three starts at this tricky seven-furlong distance. A first-out winner at Gulfstream Mar. 1, she stubbed her toe when fourth over that track’s one-turn mile Apr. 10, but has since added a May 16 Churchill allowance and the June 6 GIII Dogwood S. Trainer Ian Wilkes also sends out Turtle Trax (Cairo Prince).

Should the two chief protagonists happen to cancel each other out on the front end, Sconsin (Include) could prove the chief beneficiary. A maiden winner at second asking off the turf at the Fair Grounds in February, the Lloyd Madison homebred was fourth in the aforementioned May 16 allowance in Louisville won by Four Graces and most recently belied odds of 19-1 to post a five-length victory from off the pace in a 6 1/2-furlong allowance beneath the Twin Spires June 13.