'Special' Group Lines Up at Saratoga 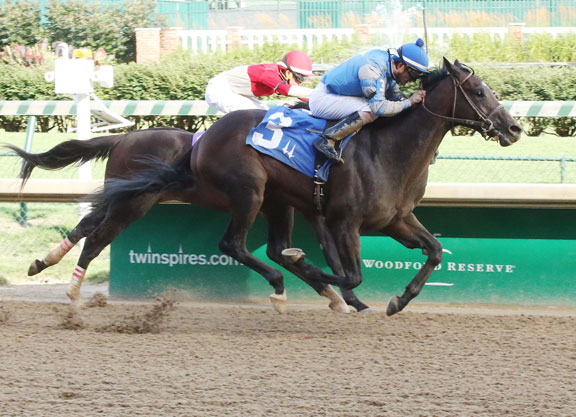 Things did not look especially promising for Hollywood Star (Malibu Moon) when the gates flew back for his June 28 debut, as the $550,000 Keeneland September graduate was off slowly, bumped with a rival and was far off the pace. But he gradually worked his way into contention and was spun wide into the lane, but closed his final quarter-mile in a fast :24.43 to earn his Rising Star.

“He's doing good. He's a real racehorse,” trainer Dale Romans told the NYRA press office. “Horses with that kind of pedigree don't lie to you. He came back and has trained better after the race, and all that put together I don't think he'll fool me. He trained like a good one from day one. When he shipped up they said he was the best one.”

Barry Lee (Violence) ships in from Maryland for Sagamore Farm and Horacio de Paz off a spectacular debut effort in which he showed good speed from the inside gate and posted a final furlong in a very sharp :11.65 to graduate by an imposing 6 1/2-length margin.

Winchell Thoroughbreds and Willis Horton's Copper Bullet (More Than Ready) was a debut runner-up, then scorched the Churchill main track to earn his diploma by eight lengths May 25. He was forced to endure a strange stop-start trip in the GIII Bashford Manor S. June 30, but kept on well despite some traffic at the quarter-pole to be second to fellow 'Rising Star' Ten City (Run Away and Hide).

“I thought he struggled with the racetrack when he first got up here, but his last work was pretty good,” trainer Steve Asmussen told the NYRA notes team. “He's a good horse. He has quality and hopefully has some better races ahead of him.”

Mo Diddley (Uncle Mo) was the first of the quartet to earn the Rising Star designation after veering out sharply at the break of his May 18 bow before staying on for a determined score. Trainer Mark Casse sees improvement ahead.

“We're really excited and think he [can be] a superstar,” Casse told the notes team. “He's only started one time. Watching the head-on [camera], they broke and he took a right-hand turn, which 2-year-olds often do when they break on the outside the first time. He went out of the picture and then all of a sudden, he reappeared and he still won.”

Diamond Oops (Lookin at Lucky) had some issues at the gates in both his starts, but he has managed to win both, including the July 1 Kiss a Native S. with a field-best 80 Beyer Speed Figure.