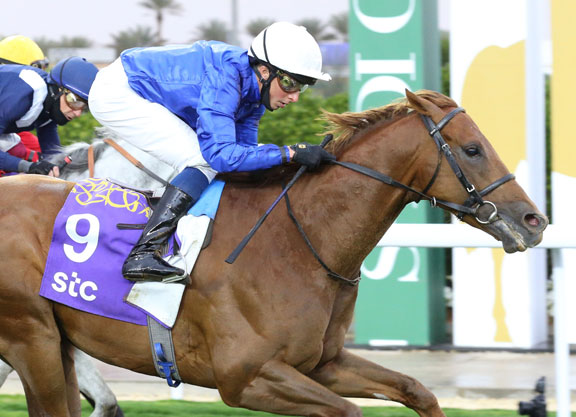 The favourite and headline act Channel Maker (English Channel) may have been upset in the card-opening Neom Turf Cup, but that was not the case 35 minutes later, with last year's G1 Prix Maurice de Gheest victor Space Blues (Ire) (Dubawi {Ire}) obliging at short odds for Godolphin and trainer Charlie Appleby. Stalking the pace just off the fence, Space Blues and William Buick sat on the heels of last year's winner Dark Power (Ire) (Dark Angel {Ire}) down the backstretch. Space Blues had about three lengths to make up upon turning for home and he was briefly seamed in by his stablemate Glorious Journey (GB) (Dubawi {Ire}), but when daylight appeared so did Space Blues, charging down the middle of the track to overhaul Dark Power in a well-timed ride and win by three-quarters of a length, with longshot Urban Icon (GB) (Cityscape {GB}), a now locally trained 320,000gns buy from the Tattersalls Autumn Horses-in-Training Sale last year, holding on gamely after pressing the early pace to be third.

The winner of his lone start at two, Space Blues picked up his first black-type win, with Urban Icon a neck behind in second, in the Listed Surrey S. going seven furlongs at Epsom at three. He built on that promise to be second in the G3 Jersey S. and G1 Prix Jean Prat and third in the Maurice de Gheest before season's end, and after kicking off his 4-year-old campaign with a nondescript seventh in the G3 Nad Al Sheba Turf Sprint, Space Blues truly blossomed upon his return to Europe last summer. The chestnut went unbeaten in four starts, taking Haydock's Listed Spring Trophy S., the G3 Prix de la Porte Maillot and the G2 Lennox S. all over seven furlongs before dropping down to 6 1/2 for a career-best victory in the Maurice de Gheest over the dual Group 1 winner Hello Youmzain (Fr) (Kodiac {GB}). Space Blues was defying a more than six-month layoff to keep his winning streak alive on Saturday.

“Absolutely delighted with that,” said trainer Charlie Appleby. “We knew he was a class horse coming into the race and he had a lovely draw. I could see [the ground] was a bit loose for him and our concern was that he might just spin a bit on it, but he's come back on the bridle turning in like a class horse and put the race to bed at the right time.

Buick added, “We had a great run through. He broke well and I didn't want to be too close to the pace. The pace was perfect. It wasn't too hot or too slow. I followed Frankie [on Dark Power] before the split in the straight. It was how I hoped the race would pan out. He was the best horse and I didn't want to go for any heroics. You'd imagine this would set him for the [G1] Al Quoz [Sprint on Mar. 27].”

Space Blues is the sixth foal out of the G2 Challenge S. scorer Miss Lucifer (Fr) (Noverre), who was bred by Sheikh Maktoum's Gainsborough Stud. Miss Lucifer's first foal was Godolphin's Shuruq (Elusive Quality), who ran at the Dubai World Cup Carnival for Saeed bin Suroor in 2013 and 2014 and won the G3 UAE Oaks, G2 Al Maktoum Challenge Round 1 and G3 Burj Nahaar before going on to take the G3 International Istanbul Trophy in Turkey. Shuruq has gotten off to a good start at stud in America, her first two foals being the Grade III-placed Javanica (Medaglia d'Oro) and the listed-winning and dual Grade I-placed Antoinette (Hard Spun), while she has a 2-year-old filly by Medaglia d'Oro and a yearling colt by Uncle Mo. Featuring under Space Blues's third dam High Spirited (Ire) (Shirley Heights {GB}) is the G1 1000 Guineas victress Virginia Waters (Kingmambo) and G1 Matron S. winner Chachamaidee (Ire) (Footstepsinthesand {GB}). Miss Lucifer has a yearling filly by Dark Angel (Ire).