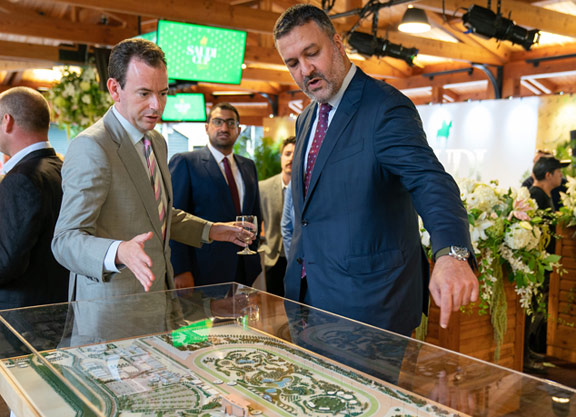 SARATOGA SPRINGS, NY – The countdown to next year's inaugural Saudi Cup officially began Wednesday evening with a gala organized by the race's officials in the walking ring at the Fasig-Tipton sales grounds in Saratoga. The race, scheduled to be run next Feb. 29 at King Abdulaziz Racetrack in Riyadh, will be run over 1800 meters of the dirt track and will be worth $20 million–making it the world's richest race. The field will have a maximum of 14 runners, with $10 million going to the winner.

“The introduction of the Saudi Cup as an international race is without doubt the most significant event in the history of horse racing in Saudi Arabia, and demonstrates our resolve to develop this great sport in the Kingdom of Saudi Arabia, and also our ambition to become a leading player on horse racing's world stage,” said Prince Bandar.

The Saudi Cup is situated, by design, between two titans of the racing calendar, with the GI Pegasus World Cup Invitational Jan. 25 at Gulfstream Park and the G1 Dubai World Cup at Meydan Mar. 28, and the top three finishers in the Pegasus will be receive automatic invitations to the race.

“We chose the timing very carefully,” Prince Bandar said. “We think it fits in nicely between those two races. It is close enough to the Dubai World Cup so that people who do come to that part of the world can stay. It's a wonderful area to train. And I think we were very lucky that we had that opening between those two races.”

Initial reaction to the new race has been positive, according to Bandar.

“We've had positive feedback from the States, from Europe and from Japan,” he said. “We are very excited to have them excited about such a race. I think we will have to prove ourselves in the upcoming years. We understand that, but we think we have the right team and the right people. We definitely have one of the best facilities in the world. We have everything going for us.”

Officials expect to make announcements about additional races that will be added to the Feb. 29 card in the months ahead.

“It's not a one-race event,” Prince Bandar said. “There are several races, all with excellent prize money, both on dirt and turf.”

Phoenix Thoroughbreds' Tom Ludt was in attendance and asserted the operation's commitment to be a part of the inaugural Saudi Cup.

Phoenix horses training overseas and considered likely contenders to line up in the Saudi Cup include Dubai World Cup runner-up Gronkowski (Lonhro {Aus}), but the operation could also send American-based runners over for the race. Ludt admitted one of Phoenix's American trainers was already keen on taking a spot in the historic race's starting gate.

“Steve Asmussen said to me today, 'Who are we running?' and I said 'Well, we'll find another one,'” Ludt said.

“We know that over the last 20 to 30 years, international racing has played a key part in the development of the whole sport,” Herbert said. “International racing, of course it brings international horses together–international competition is a hugely important thing. But it also brings cultures together. And whenever you happen to have an international race, in Japan or in the Breeders' Cup, or the Arc de Triomphe or Royal Ascot, and now Saudi Arabia, it brings people together. It is just a wonderful opportunity to show off your country, your culture, your racing heritage. I think that is just everything about our sport and nothing is more exciting, and I think from a competition perspective, it's flying your flag. Representing your country, but also seeing what another country is like. I think seeing what Saudi Arabia is like is fascinating, it's a journey and that's what we are going on.”