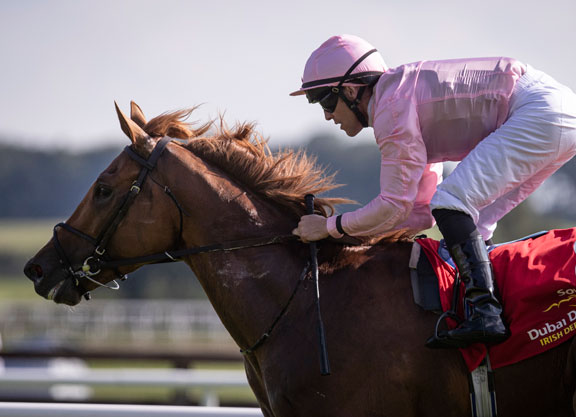 Second to dual Cartier Horse of the Year Enable (GB) (Nathaniel {Ire}) in the G1 King George VI and Queen Elizabeth for Aidan O'Brien at Ascot last July, the 5-year-old enters off a close third in the Bahrain International Trophy Nov. 20.

The rail-drawn, 8-5 morning-line favorite kicks off his campaign for Chad Brown, who also secured the 2014 GI Belmont Oaks Invitational S. with Minorette (Smart Strike) for the Coolmore partners.

“We received him over the winter at Payson Park and he's settled into a nice work pattern,” Brown said. “He came over very sound, and in great shape from Aidan. He sure trains like a horse with a lot of quality. I've seen him train on firm ground in Florida and he's fine with it. He can handle some cut in the ground.”

Brown continued, “I'm not trying to reinvent the wheel with him, so if he has speed, I wouldn't take that away from him. He's pretty forward in his breezes. He grabs the bit and goes on. If he breaks well and Irad [Ortiz, Jr.] wants to put him on the front, I would be happy with that.”

The field of eight also includes the talented Gufo (Declaration of War). His sophomore campaign was headed by a win in the GI Belmont Derby Invitational S. Oct. 3 and a close third, beaten just a neck, behind the talented Domestic Spending (GB) (Kingman {GB}) and Smooth Like Strait (Midnight Lute) in the GI Hollywood Derby last out Nov. 28.

Domestic Spending, of course, returned to dead-heat for a win in the GI Old Forester Bourbon Turf Classic S. on the GI Kentucky Derby undercard with the latter right there in a close third.