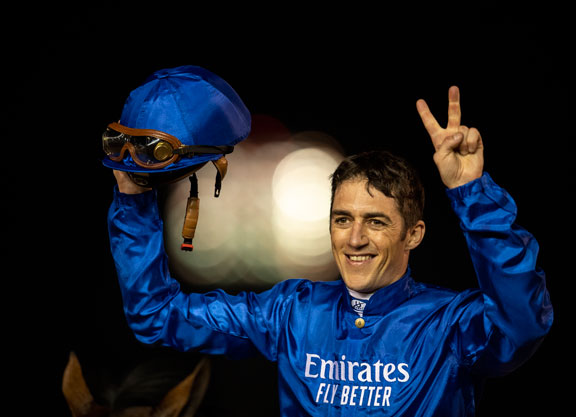 Courtesy of a double at Compiegne on Wednesday, Christophe Soumillon became the winning-most jockey in French racing history, his tally of 3,315 victories taking him past the figure set by Yves Saint-Martin.

Belgian-born Soumillon, 38, already held one notable record, his total of 305 victories in 2017 being the highest ever achieved in France in one year. Having collected his first Cravache d'Or (the prize given to France's champion jockey) in 2003, Soumillon currently has 10 championships to his name (he tied with Pierre-Charles Boudot in 2015) and he is clearly making a bold bid to regain the title which he lost to Maxime Guyon last year. He is currently keeping himself very busy, commuting back and forth from Dubai to France, where his two wins at Compiegne on Wednesday came in the Prix du Mont Saint-Pierre on HH Aga Khan's home-bred filly Valaya (Fr) (Mastercraftsman {Ire}), trained by Alain de Royer-Dupre, and in the Prix du Carrefour du Rond Royal on the Nicolas Caullery-trained Ulan (Ger) (Areion {Ger}).

Soumillon's worldwide total is obviously considerably higher than 3,315, not least because he has enjoyed considerable success in Hong Kong, Japan and the UAE over the years as well as all around Europe. He has ridden plenty of big winners in Dubai both for Mike De Kock (most notably on horses owned by Sheikh Mohammed bin Khalifa al Maktoum) and for Saeed bin Suroor, for whom he has won the past two runnings of the G1 Dubai World Cup on Thunder Snow (Ire) (Helmet {Aus}). His victories at the current Carnival include the G2 Al Maktoum Challenge (Round 2) last month on Benbatl (GB) (Dubawi {Ire}).

Soumillon still has a fair way to go to equal Saint-Martin's record of 15 Cravaches d'Or (achieved between 1960 and 1983). However, he has time on his side and is still riding with all the enthusiasm of a youngster. What he does not have on his side, though, is size: unlike Saint-Martin, a natural lightweight, Soumillon is unable to ride lighter-weighted horses, which makes his numerical success all the more remarkable. His size, though, has been no disadvantage on his occasional forays over hurdles, which have seen him post big wins at Auteuil on Mandali (Fr) (Sinndar {Ire}) in the G1 Grande Course de Haies d'Auteuil in 2010 and Hippomene (Fr) (Dream Well {Fr}) in the G1 Prix Cambaceres (Grande Course de Haies des 3 Ans) in 2013.