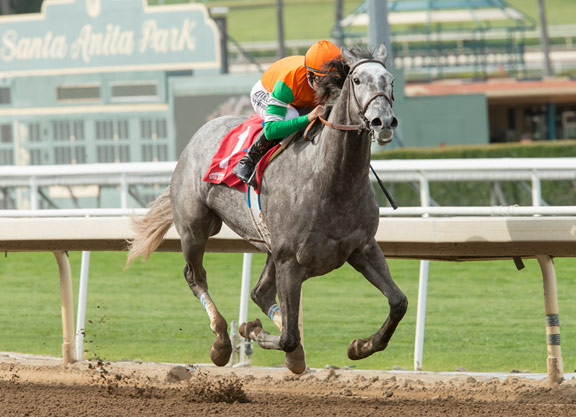 'TDN Rising Star' Unique Bella (Tapit), the overwhelming favorite for the GI Kentucky Oaks, will be forced to miss at least the Apr. 8 GI Santa Anita Oaks–if not the May 6 Kentucky Oaks itself–due to a sore shin.

“She has a sore shin,” confirmed Fernando Diaz-Valdes, racing manager and advisor for owner Don Alberto Stable. “We're just going to keep a close eye on it, and maybe we'll just go directly to the Kentucky Oaks.”

A $400,000 KEESEP acquisition, the daughter of 2010 GI Breeders' Cup Ladies' Classic heroine Unrivaled Belle (Unbridled's Song) has been absolutely dominant in four efforts since finishing second in her debut last June. She took the Jan. 8 GII Santa Ynez S., Feb. 5 GII Las Virgenes S. and Mar. 4 GIII Santa Ysabel S. at Santa Anita by a combined 18 1/2 lengths, and was backed all the way down to even-money in the Oaks future wager that closed Feb. 26.

“We don't want to jeopardize anything,” Diaz-Valdes added. “We don't want to cause her to have a more serious problem. We need to keep this filly sound. She's a great filly. For us to make a decision like this is so painful, but we have to worry about the good of the horse–not ourselves. Grade I's will be in her future. There are many around the world, and we won't sacrifice her for one race.”

When asked for more on her prognosis, he said, “We will know more day by day. At the moment we're just keeping a close eye. There was some soreness and inflammation. We took X-rays and everything was fine, but we want to make sure that we don't jeopardize the Kentucky Oaks or racing for the rest of the year.”

Diaz-Valdes admitted, however, that the Oaks might prove too ambitious a goal at this point in time: “To be honest, at this stage, of course, if we're losing training time for two or three weeks we have to take the Kentucky Oaks off the table.”

Unique Bella had already been compared to fellow Jerry Hollendorfer trainee, two-time champion and 'Rising Star' Songbird (Medaglia d'Oro), who was forced to miss last year's Kentucky Oaks after a dominant win in the Santa Anita Oaks due to a fever interrupting her training schedule. That Fox Hill Farm colorbearer returned to dominate her peers throughout the summer and early fall before suffering her first defeat by the narrowest of margins to the great Beholder (Henny Hughes) in the GI Breeders' Cup Distaff.

Diaz-Valdes noted that while Don Alberto's Oaks chances might have taken a significant hit, the Heller-Solari family still boasts a Kentucky Derby hopeful in Bob Baffert trainee Reach the World (Tapit), who finished a solid second in a salty allowance Mar. 9 and will contest the GI Santa Anita Derby Apr. 8.