Songbird Continues to Thrive in Motherhood 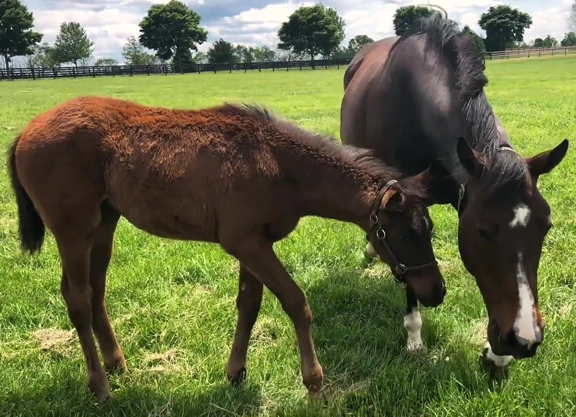 Songbird and her Tapit filly

Of all the jaw-dropping feats that a Thoroughbred is able to accomplish, perhaps nothing is quite as miraculous as watching a fierce, powerful racehorse transform to fill the role of motherhood.

Wayne Sweezey, who owns and operates Timber Town Stables alongside his wife Cathy, has watched this dramatic role change hundreds of times. But one mare on his farm in particular has excelled above and beyond both on the track and with a foal by her side.

She won 13 of her 15 starts, never finishing worse than second, and took nine Grade I victories over her three-year career. She retired with over $4.6 million in earnings as a two-time Eclipse Award winner and Breeders' Cup heroine and  for $9.5 million at Fasig-Tipton November in 2017

Stories of 'TDN Rising Star' Songbird's (Medaglia d'Oro) days on the track will no doubt be shared for generations to come, but for those who know her, her current role as a broodmare is equally as extraordinary

“She's the best,” Sweezey said. “Songbird is probably one of the most professional mares we've ever had here. She's what everybody wants in a broodmare.”

Songbird had her second foal this year on Jan. 26, a filly by Tapit.

“She lay down and foaled with no problems,” Sweezey said. “The foal was big and strong. She's got a big, beautiful shoulder, a lovely hip, and is correct. She's a very special individual for a foal.”
Songbird's first foal, a filly by Arrogate, is now a yearling developing in Ocala at owner Mandy Pope's Whisper Hill Farm. (See 2019 TDN video).

“The yearling is doing super,” Sweezey reported. “She will definitely be as big as Songbird when she grows. One of the reasons we thought about Arrogate for Songbird is to give her a little more scope, and I think we're going to see that at the end of the day.”

The jury is still out on where this first foal might end up.

“I'm not sure if Mandy will sell her or keep her,” Sweezey said. “She's vacillating right now. Mike Smith has indicated that he would love to ride this filly, so I think that's in the back of everybody's mind. I have high hopes for her.”

Now over three months old, this year's foal reminds him even more of Songbird than the first, Sweezey said.

“I think that with Arrogate and Tapit, you have two completely different individuals. Both of them complement the mare in their own right. Where we're going to see a little bigger individual in the yearling, this filly is going to be more of a Songbird type, a heavier and thicker type.”

Sweezey said that this foal also shares Songbird's easygoing but curious personality: “Songbird's experience on the track lends to her personality. She's not a dominant mare in the field and she's not mean, she just loves attention. And this baby is always the first to come see you. That kind of goes with the family.”

Baby Bird, as she is affectionately referred to by Cathy Sweezey, has become quite the personality among her pasture mates.

“Her only annoying thing is that she's figured out how to chew the other mares' and foals' tails,” Cathy Sweezey said. “So we have lots of chili in the tails so Baby Bird can't chew them all off.”
Songbird has already checked back in foal to Tapit.

“Mandy is crazy for Tapit,” Wayne Sweezey said. “With Songbird, this will be her second shot with Tapit. She went right back in foal. Whether we go back to him for a third time, I don't know. I think we may switch around and go another direction for next year. But Mandy is reaching for that brass ring, and breeding the best to the best is her mantra.”

As for Baby Bird, Sweezey said he suspects this filly will stay with Pope. “I think it would be a good horse for her to keep,” he said. “If she wants to keep any of them, this would be the one I would pick.”

Although thriving in her role of motherhood, Songbird doesn't hesitate to keep her onlookers on their toes. Every so often, she will give the Sweezey's a glimpse of who she used to be, and in turn the foal will show what she could become.

“This morning they were the last paddock we put up,” Sweezey said. “I watched Songbird kick into full gear going down the fence line and that filly ran along beside her, which made me shudder a little as fast as they were going, but great actions on both parts. I think this filly is going to be pretty special.”