Son of Deep Impact (Jpn) to Stand in Indiana 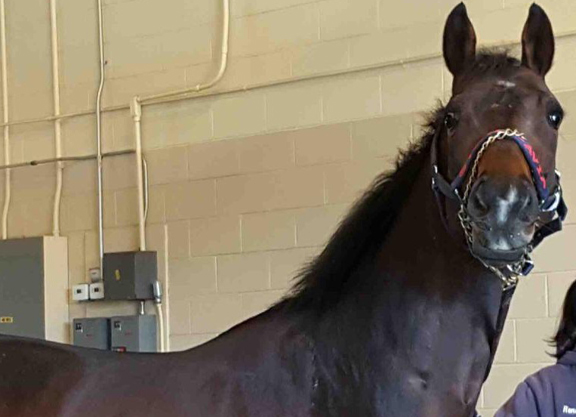 Dowsing (Jpn) (Deep Impact {Jpn}–Forest Rain {Fr}, by Caerleon), the first son of his multiple champion Japanese sire to stand in the North America, will hold court at Arven and Jay Holden's Holden Farms in Indiana, the farm announced Monday. Arven Holden, who runs the farm with his son Jay, was upbeat regarding his newest stallion and commented, “He is real nice. He's a nice acting horse, a young horse. Deep Impact offspring earned over $72 million last year.”

Bred by Vinca Holdings Inc. in Japan, the 4-year-old was unraced due to a tendon injury while training for Flaxman Holdings in France. Out of the winning Caerleon mare Forest Rain, herself a half-sister to French highweight and G1 Breeders' Cup Mile hero Domedriver (Ire) (Indian Ridge {Ire}), as well as French Group 3 victor Tau Ceti (GB) (Hernando {Fr}), Dowsing He is a half-brother to Freedonia (GB) (Selkirk), victorious in the G2 Prix de Pomone and runner-up in the GI Joe Hirsch Turf Classic Invitational S. at Belmont in 2006, before producing the English SW Polybius (GB) (Oasis Dream {GB}), who went on to be third in the G3 Guest Bengough S. Dowsing's third dam is a full-sister to champions El Gran Senor (Northern Dancer) and Try My Best (Northern Dancer.

Dowsing will command a fee of $10,000 for his initial season at stud.