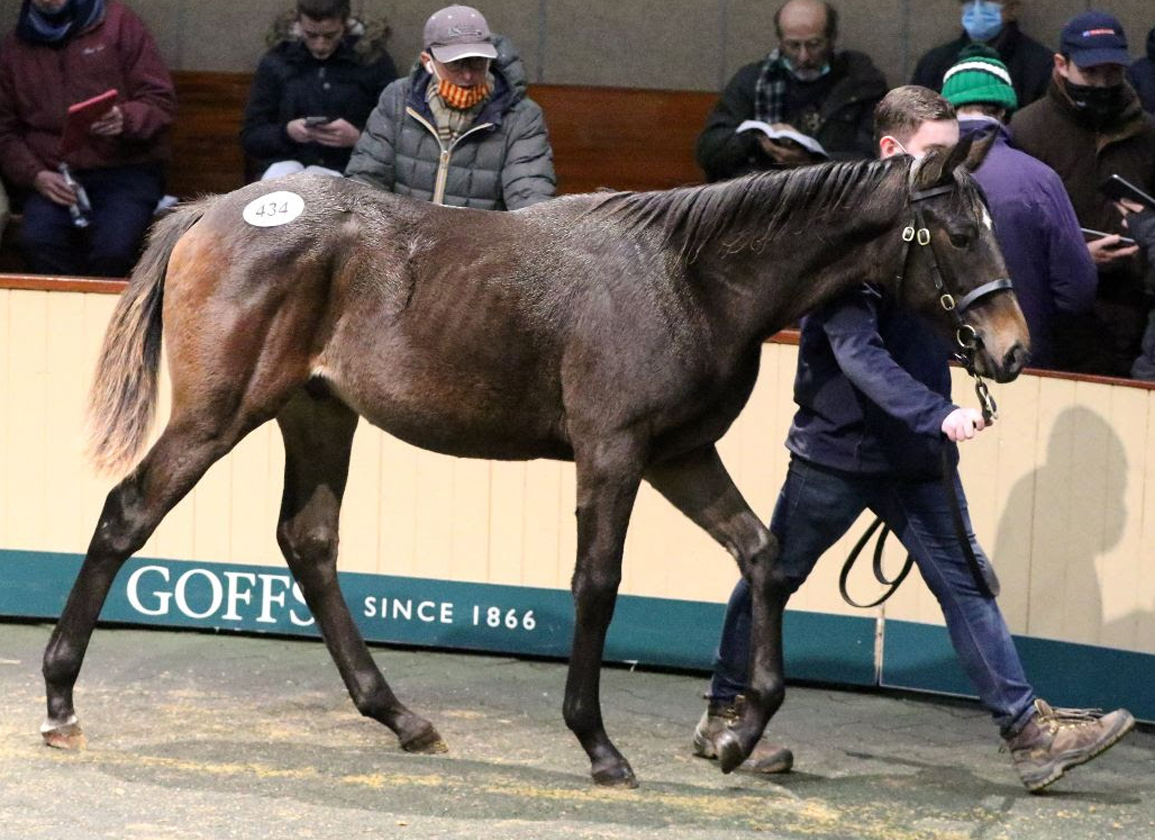 Lot 434, a son of Camelot topped the second session | Goffs

KILDARE, Ireland–The momentum built up on day one of the Goffs November Foal sale carried through Tuesday when strong trade was again the order of the day. The step up in pedigree power on offer further buoyed trade and the trend of an improved set of figures also continued its upward trajectory.

Leading the way on Tuesday was a son of Camelot (GB) offered by his breeder Airlie Stud as lot 434 and purchased by Timmy Hyde's Camas Park Stud for €170,000. The February-born colt is out of The Fairy (Ire) (Invincible Spirit {Ire}), who won a 2-year-old maiden at Wolverhampton in 2014 in the colours of Anthony Rogers and who is a half-sister to G1 Moyglare S. winner Chelsea Rose (Ire) (Desert King {Ire}), who in turn is the dam of dual Group 1 winner Kew Gardens (Ire) (Galileo {Ire}).

Camas Park have been dealing in high-stakes transactions at Goffs for several decades now and the farm's evergreen owner Timmy Hyde confirmed a return to a sale ring in 2022 would feature in the colt's future. “He is a lovely foal, a great mover and we have bought him for resale,” he said. “He is from a proper family so let's hope he is lucky.”

Tuesday's sale picked up right where it left off the previous evening when the second foal into the ring, lot 247, sold for €130,000. Just like Monday evening's session topper, this Exceed And Excel (Aus) colt, offered by The Castlebridge Consignment on behalf of Shadwell Estate, was bought by the Tally-Ho Stud team. The chestnut is the third foal out of the stakes-placed Ejaazah (Ire) (Acclamation {GB}), whose first progeny Elsals (GB) (Havana Gold {Ire}) showed plenty of promise when third in a 2-year-old maiden at York last month for trainer Richard Hannon. A date at a yearling sale next year under the Tally-Ho banner will no doubt feature in future plans.

The same could also be said for another Tally-Ho foal purchase, lot 270, a Starspangledbanner (Aus) colt sold by the Irish National Stud for €80,000. This chestnut is out of the former Jim Bolger trainee Fiuntach (Ire) (Intense Focus) who is a half-sister to the MGSWs  Steip Amach (Ire) (Vocalised) and Ceisteach (Ire) (New Approach {Ire}).

The O'Callaghans added further to their portfolio when purchasing lot 333 for €75,000. The son of US Navy Flag was bred by Tommy Stack and consigned by Grenane House Stud.

Tally-Ho were also keen to support the progeny of their own young stallion Inns Of Court (Ire), and a half-brother to smart juvenile Gubass (Ire) (Mehmas {Ire}) offered by Ringfort Stud as lot 450 on behalf of breeder Tom Lacey set the farm back €80,000.

Lot 320, a Camelot colt, was offered by Tipperary based Stanley Lodge Stud and is the first produce out of Lady Magdala (Ire) (Teofilo {Ire}), a half-sister to G3 Zetland S. winner Max Vega (Ire) (Lope De Vega {Ire}) along with two other stakes performers.

“We're big fans of the stallion and this is a lovely foal from a good home,” remarked Michael Gleeson of Aughamore Stud after he signed for lot 320 for €120,000.

Westmeath based Aughamore consists of Gleeson and his brother Laurence and the duo, aided by Matthew Houldsworth, are an emerging force in the breeding and pinhooking sector.

“We bought a Mastercraftsman (Ire) colt here last year from Stanley Lodge and we sold him well at the yearling sales last month so we decided to go back to the same hotel so hopefully he will be lucky for us when we bring him back for sale next year,” Gleeson added.

Although he has already carved out a good reputation in the Southern Hemisphere where he was Champion First-, Second-, and Third-Season Sire in Australia, Zoustar (Aus) will have to do it all over again with his Northern Hemisphere progeny who will begin racing in Europe next year. However, he looks to have plenty of smart recruits to represent him based on sales results so far with his yearlings averaging £75,000 this year.

The appetite for his foals seems to be mirroring that of the yearling demand with noted judges Yeomanstown Stud giving £90,000 for a Zoustar colt. Lot 269 was consigned and bred by Airlie Stud out of the winning Acclamation (GB) mare Field of Stars (GB) and this transaction continues the good run in the sales ring for the mare whose other two offspring have sold for €90,000 and 80,000gns, respectively.

The O'Callaghans of Yeomanstown made another significant purchase later in the session when successfully bidding €98,000 for lot 444, a colt by Advertise (GB) from The Castlebridge Consignment. The dam True To Love (Ire) (Es Que Love {Ire}) was bought in this ring for €47,000 two years ago and is catalogued as lot 1112 in the breeding stock sale on Friday, back in foal to Advertise.

Several former top-class racehorses are represented by their first crops of foals this week and among those to find favour among buyers was 2019 G1 July Cup hero Ten Sovereigns (Ire). Joe Hernon's Castletown Stud offered a colt by Ten Sovereigns as lot 378 and the second foal out of Princess De San (Ire) (Mastercraftsman {Ire}) was eventually knocked down to John Cullinan and Roger Marley for €90,000.

“We're perennial resellers so this colt will obviously come back to a yearling sale next year,” quipped Cullinan. “He is a good, solid, well-developed colt with a good walk. He has what we all want. Ten Sovereigns was a very talented racehorse and I've been impressed by the few foals I've seen by him. Actually he is part of what looks a very smart bunch of first-crop stallions.”

Cullinan was speaking from experience as he had only a short time earlier struck for another foal by a Coolmore first-season sire in Magna Grecia (Ire). Lot 372, out of the well-related Piscean Dream (Ire) (Dream Ahead), cost the Horse Park/Church Farm team €70,000.

On the day it was revealed that Tally-Ho stallion Mehmas (Ire) would have his 2022 stud fee doubled to €50,000, buyers and pinhookers remained keen to get their hands on his progeny. Among those was Michael Fitzpatrick of JC Bloodstock who went to €60,000 to acquire Grennanstown Stud's filly (lot 285) out of Gracious Lady (GB) (Royal Applause {GB}) while six hips later Hillwood Bloodstock bought lot 291 for €70,000.

Meanwhile Tally-Ho stalwart Kodiac (GB), whose fee has been maintained at €65,000, was represented by a filly offered by Phoenixtown Stud as lot 323 that sold to RC Bloodstock for €90,000.

The action continues from 10 a.m. on Wednesday when some individuals with world-class pedigrees are set to come under the hammer.