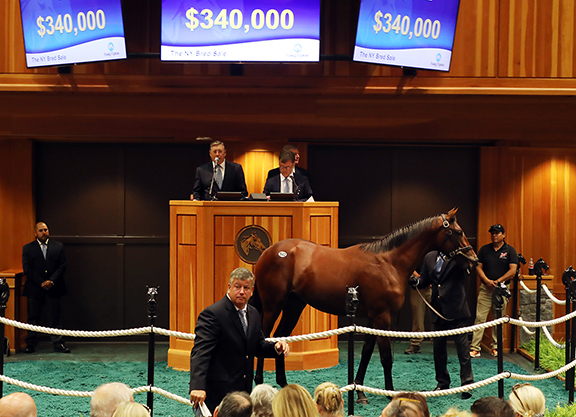 SARATOGA SPRINGS, NY–The Fasig-Tipton New York-Bred Yearling Sale opened Sunday evening with a session of steady action capped by a son of Constitution who sold for $340,000 to trainer John Terranova.

“It was a solid opening session to the New York-Bred sale,” said Fasig-Tipton President Boyd Browning, Jr. “There was lots of interest across the board. We continue to see the strength of the New York-bred market. It was on display again tonight.”

The two-day auction has a slightly different format this year, with Sunday evening's somewhat abbreviated session of just 119 catalogued head to be followed by a longer session Monday. The change in format makes direct comparisons impossible.

“We can talk about overall results tomorrow after we get comparable figures for the two days because then it will be apples to apples,” Browning said Sunday night. “It was a pretty consistent marketplace tonight. The median is virtually the same as last year and the average is down a little bit. But I think we've got a lot of outstanding horses tomorrow.”

The session-topping son of Constitution, who was consigned by Blake-Albina Thoroughbreds, was one of seven to sell for $200,000 or over. And the 11 highest priced horses of the session, purchased by a seemingly even mixture of end-users and pinhookers, were acquired by 11 different buying interests.

Trainer John Terranova made a final bid of $340,000 to acquire a colt by hot first-crop sire Constitution during Sunday's first session of the Fasig-Tipton New York-Bred Sale. Terranova, bidding out back, purchased the yearling (hip 342) on behalf of an undisclosed client.

“We were really happy we got him,” Terranova said. “We looked at him and thought he was the best horse in the sale. Obviously, Constitution has gotten off to a fast start with his 2-year-olds and he has had some versatile runners on the track already.”

The bay colt was consigned by Blake-Albina Thoroughbred Services on behalf of his breeder, Maurice and Samantha Regan's Newtown Anner Stud. He is out of Akris Queen (Arch), a mare Terranova trained on behalf of the Regans, and his second dam is Catnip (Flying Paster), who produced graded stakes winners Indescribable (Pleasant Tap) and Micromanage (Medaglia d'Oro).

“I actually trained the mare and she has big pedigree and she was a nice sound filly,” Terranova said. “So it's nice to see her throw a good-looking colt like that.”

Multiple Grade I winner Constitution has been represented by seven winners to date, including graded stakes winners Amalfi Sunrise and By Your Side.

“With everything lining up–with the sire getting as hot as he has been currently, and this horse's physical was really, really strong-just all of the stars lined up at the same time. So we had the feeling he could bring that,” said Newtown Anner advisor Nick Sallusto.

Patti Reeves, who along with husband Dean, and R. A. Hill Stable, and Corms Racing Stable campaigns recent GII Jim Dandy S. winner Tax (Arch), teamed with those partners again to add a filly by Runhappy to the roster when signing the ticket at $300,000 on hip 380 Sunday in Saratoga. Reeves did her bidding in the pavilion with Tax's trainer Danny Gargan sitting not far away.

“We loved her from the start-she is just a gorgeous filly-and we love the incentive program for the New York-breds,” Reeves said. “The incentives for New York breds are heads and shoulders above other states. We wish we had something like that in the state in Georgia and if we ever get horse racing in the state of Georgia, that's what we will do.”

The yearling is out of stakes-placed Charismata (Curlin), a half-sister to stakes winner Little Dancer (Successful Appeal). She was consigned by Gainesway on behalf of Fasig-Tipton President Boyd Browning, Jr. and partners. The mare, in foal to Constitution, RNA'd for $42,000 at the 2016 Keeneland November sale. Her Constitution colt, also bred by Browning and Billy Terrell, sold for $70,000 at the 2018 Keeneland January sale.

“This is a filly that we really like and hoped that she would fall in our range. And she did. So it was good,” Englehart said.

The trainer continued, “We bought a few horses at the select sale, and obviously having New York ties, we wanted to look here, too. And we found a few New York-breds hopefully we can buy.”

The yearling is out of Awesome Bull (Holy Bull), who like her dam, was bred by Vivien Malloy's Edition Farm.

“She is a beautiful mare,” Malloy said of Awesome Bull, whose first foal was $344,500 earner Awesome News (Congrats). “She just needs somebody to give her more black-type. I turned to my trainer this morning and told him it was his fault that she doesn't have black-type because Awesome News ran her eyeballs out and they never tried to get black-type. She belonged to a syndicate and all they wanted to do was win. But breeders want black-type.”

A longtime New York breeder, Malloy admitted it was gratifying to see the ever-expanding growth of the New York market.

“The years behind us were pretty grim,” Malloy said. “And I'm so proud of New York and the program and the people interested in New York-breds now.”

As New York-breds continue to succeed beyond the state's borders, Malloy is watching horses she has bred compete across the country.

“I have bred and sold two colts who are running at Del Mar,” she said. “One broke his maiden at Del Mar and another one just got second. It's great to see.”