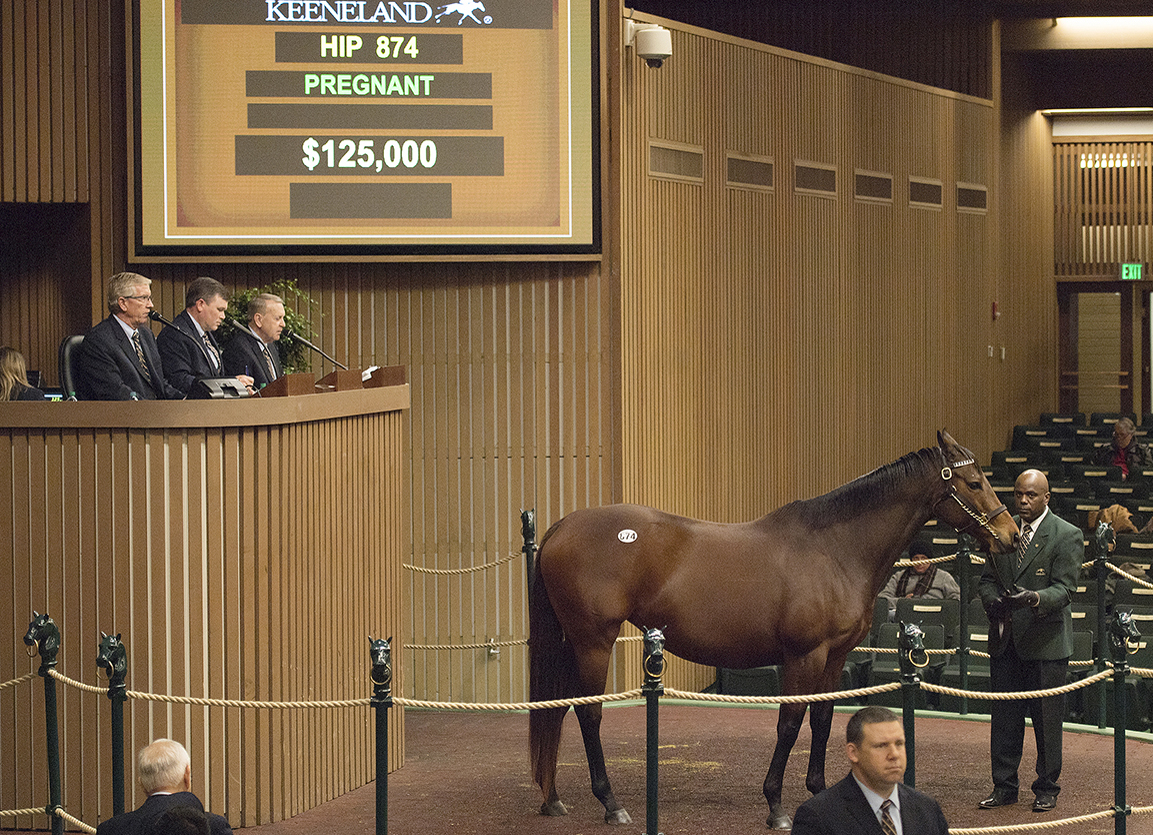 LEXINGTON, KY – The Keeneland January Horses of All Ages Sale opened its Book 2 section with a solid, workmanlike session Wednesday in Lexington. Five horses sold for six figures during the session, led by a pair of mares who fetched matching $125,000 final bids. Charles Fipke's C F Farms was first to hit that session-topping mark when acquiring the unraced Oh Mrs. G (Offlee Wild), in foal to Practical Joke, from the Elite Sales consignment. SF Bloodstock and Newgate Farm paid that same amount for the racing or broodmare prospect Stallion Heiress (Exchange Rate) from the Taylor Made Sales Agency consignment. The pinhooking partnership Fish Bloodstock, led by Brian Graves, purchased the day's highest-priced short yearling when going to $120,000 for a son of Midnight Lute.

The January sale opened with a strong two-session Book 1 and Elite's Liz Crow said buyers were still out shopping as the four-day auction moved into Book 2.

“There seems to be really good foot traffic [at the sales barns],” Crow said. “I wish there was a little more of the middle market around. I think a lot of people feel that way. But a lot of people are still looking for quality. They want the really good ones and the horses that are left in the middle, a lot of them aren't finding new homes.”

“The market has been really good,” the agency's Mark Taylor said. “The bottom end is still treacherous, but for anything that has a hint of quality, there are multiple bids above the reserve and they are selling really well. It's what we saw all last year, but there is still strength for anything with quality.”

The Keeneland January sale concludes Thursday with a final session beginning at 10 a.m.

Oh Mrs. G (Offlee Wild) (hip 874) topped early returns during Wednesday's third session of the Keeneland January sale when Tom Thornbury signed the ticket at $125,000 on behalf of Charles Fipke's C F Farms. The unraced 8-year-old mare was in foal to Practical Joke and was consigned by Elite Sales. Out of Mrs. Marcos (Private Account), she is a half-sister to Grade I winner Zoftig (Cozzene), dam of Grade I winners Zo Impressive (Hard Spun) and Zaftig (Gone West). Zoftig also produced the dam of Fipke's Grade I-placed homebreds Verve's Tale (Tale of Ekati) and Tale of Verve (Tale of Ekati).

“She has a huge page and I think people were looking for quality and there wasn't a lot out there, so she kind of stuck out in the catalogue,” Elite's Liz Crow said of the mare's appeal. “She was a nice physical. She was a very pretty mare. Everyone who pulled her out liked her physical.”

The mare's covering stallion was another selling point, according to Crow. During last year's Keeneland November sale, 21 mares sold in foal to first-season sire Practical Joke (Into Mischief) for an average of $97,143. The three-time Grade I winner stands at Coolmore's Ashford Stud for $30,000.

“This mare stuck out because she had such a great page and she is in foal to a hot new sire,” Crow said. “She's by a good broodmare sire and she's pretty. So she ticked a lot of the boxes for people who are still out looking for quality horses.”

Multiple stakes-winning Stallion Heiress (Exchange Rate) (hip 948) will be joining the broodmare band aof SF Bloodstock and Newgate Farm after selling for $125,000 Wednesday at Keeneland. The 5-year-old racing or broodmare prospect is out of Menocino Beano (Smart Strike) and is a half-sister to stakes-placed Conquest Fleetfeet (Afleet Alex). She was consigned by Taylor Made Sales Agency.

“She is a lovely physical and she was obviously a very fast filly on the track,” said SF Bloodstock's Caroline Wilson. “I think she'll be great for our program.”

Bred in Ontario by Sean Fitzhenry, Stallion Heiress was puchased by Stallionville Enterprises for $100,000 at the 2015 Keeneland September sale. She opened her racing career with three straight wins, including a pair of stakes scores at Fair Grounds in 2017, and was tabbed a 'TDN Rising Star'. Nathan McCauley purchased the filly for $100,000 at last year's Fasig-Tipton July Horses of Racing Age Sale and she made one start for Premier Racing Club.

A colt by Midnight Lute (hip 953) is destined for a return trip through the sales ring later this year after selling to pinhooker Brian Graves for $120,000 Wednesday at Keeneland. Consigned by Taylor Made, the short yearling is out of Lightscameraaction (Will Take Charge), third in the 2018 GII Pocahontas S. He was bred by George Saufley, Pollock Farms, Hugh Owen and Taylor Brothers Properties.

“He was a leggy colt with a long neck and a really good mover,” said Graves, who bid while seated alongside Davant Latham and Phil Hager. “It was probably a little bit more than we would have liked to pay for a Midnight Lute, but the horse had a good year this year and he can get a very good racehorse. I guess, my argument is that, when you lead a quality horse up by a stallion who is proven to get good racehorses, people will believe. We'll probably bring him back here in September and see how we did.”

Of a competitive yearling market this week in Lexington, Graves added, “It's been extremely tough. It forces you into buying Midnight Lutes for $120,000.”

Graves and company signed the ticket on hip 953 as Fish Bloodstock and that was also the name on the ticket securing hip 883, a daughter of Midnight Lute, for $90,000 Wednesday.

Stop the Lights, who made only one racetrack appearance, is a daughter of multiple Grade I winner of Stop Traffic (Cure the Blues) and is a half-sister to Grade I winner Cross Traffic (Unbridled's Song). She sold, with the Midnight Lute colt in utero, for $10,000 at the 2018 Keeneland January sale. She preceded her yearling into the sales ring Wednesday, selling in foal to Mshawish for $43,000 to Chad Schumer.

“We bought her for some customers who own a share in Mshawish,” Taylor Made's Mark Taylor said of purchasing Stop the Lights last January. “They were looking for a nice mare to get underneath him–they were looking specifically for a Storm Cat mare to breed to Msawish–and this is the one they landed on. Fortunately enough, Lightscameraaction jumped up and Cross Traffic had a big Breeders' Cup winner. So the mare brought $43,000 and the baby brought $120,000.”

Taylor Made stands Mshawish (Medgalia d'Oro) and a short yearling from the first crop of the multiple Grade I winner consigned by the farm was first to bring six figures Wednesday when The Legend Stables bid $100,000 for hip 812.

“I think they are not complicated,” Taylor said of his early impressions of Mshawish's offspring. “They are very square, balanced and correct with good bone. They look like racehorses. They are not the flashiest horses, typically, just solid bay. They are a lot like him.”

“I think people don't really remember how good a racehorse he was,” Taylor said. “He won two Grade Is over here, dirt and turf, won a Group 2 in Dubai. We bought into him before the World Cup and he ran an unbelievable race. I didn't like the ride he got. [Frankie] Dettori had never ridden him before and put him on the lead. I think if they had ridden him more to his style, he would have run second to Chrome. But he was a serious, serious racehorse. We are very bullish on him and think he's got a big chance.”