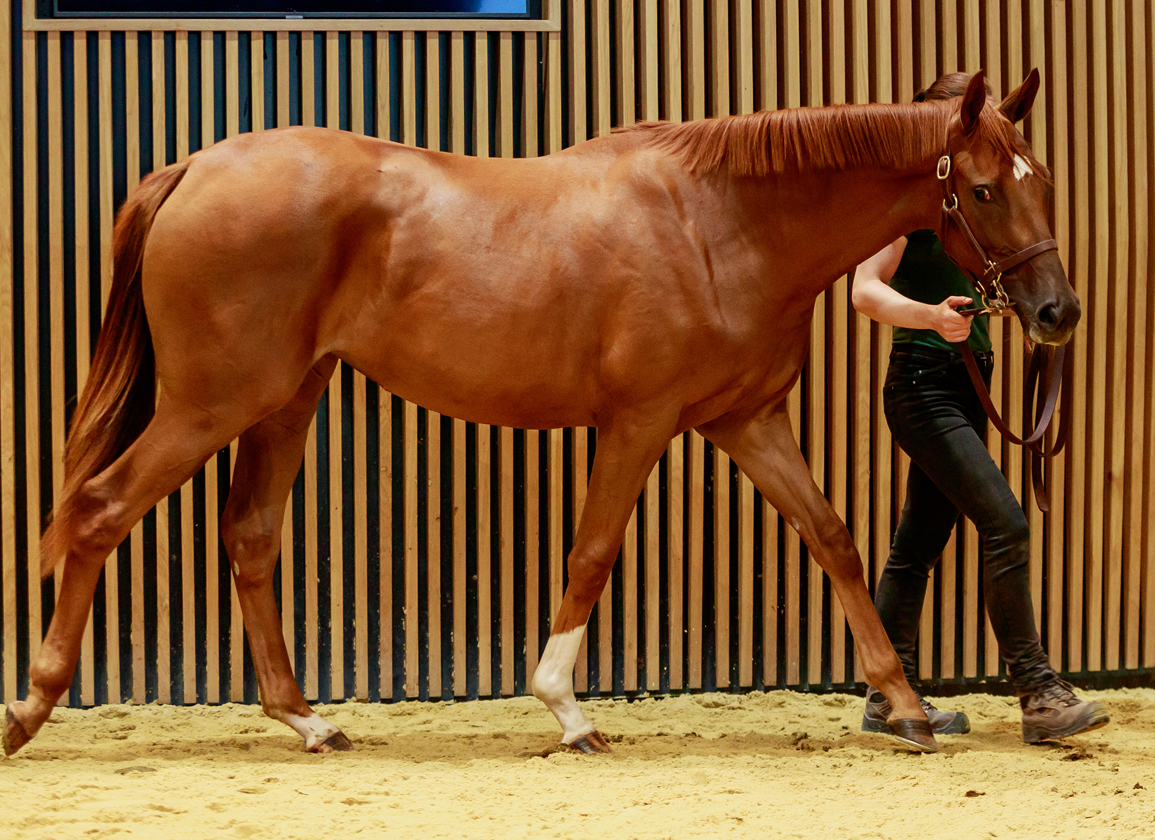 DEAUVILLE, France–Gestut Ammerland, the famed German nursery of such luminaries of the turf as Lope De Vega (Ire) and Hurricane Run (Ire), stole the limelight during the concluding session of Arqana's August Sale with a New Bay (GB) granddaughter of the homebred Deutsches Derby winner and Arc-placed Borgia (Ger) (Acatenango {Ger}).

John and Thady Gosden had already left Deauville earlier in the day following Sunday's success of stable star Palace Pier (GB) (Kingman {GB}) in the G1 Prix Jacques Le Marois for the second year running. But, through Arqana's Freddy Powell, Thady placed his bids on the chestnut filly, finally signing her up for Clarehaven Stables at €320,000.

“She's a very nice filly from a great farm, with an excellent pedigree, and she has been bought for a client of ours,” he said later via text message.

The third foal of her dam Borgia's Best (Ire) (Lope De Vega {Ire}), the filly (lot 335) hails from a family which has reaped plenty of black type over the years for Dietrich Von Boetticher's Bavarian farm. Borgia's half-brother Boreal (Ger) (Java Gold) also won the Deutsches Derby and followed up a year later with victory in the G1 Coronation Cup at Epsom. Their dam Brittania (Ger) (Tarim {GB}) was a winner of the G2 Deutsches St Leger, while Borgia's Best's half-siblings include the Group 3 winner Bermuda Reef (Ire) (Oasis Dream {GB}) and Born Wild (Ger) (Sadler's Wells), who is the dam of G1 Prix Vermeille winner Baltic Baroness (Ger) (Shamardal).

The solidity of the final day's trade remained through to the penultimate lot (lot 354), which became the session's second-highest price at €270,000. Arthur Hoyeau was the successful bidder on the sole Caravaggio yearling in the book. Consigned by Haras des Granges, she is a half-sister to two black-type performers, including the listed winner Yuman (Fr) (Literato {Fr}).

“I love Caravaggio and the dam has already produced some good horses,” Hoyeau said. “She was my pick of the day and she will go into training with Christophe Ferland for a partnership in which I will also be involved.”

At the end of the sale, Eric Hoyeau, President of Arqana and Freddy Powell, Executive Director, commented, “The sale remained very international today and the percentage of horses sold was solid, which made the average slip a little compared to 2019. Over the three days as a whole, the results were pleasing. The context was still uncertain when the catalogue was released and it is a relief to see that this edition is in line with the August Sales that we have held previously, just behind the exceptional year of 2019. This is only the third time the turnover has exceeded €40 million and the number of horses sold for €200,000 or more is the same as in 2018. We were fortunate to experience a sale in a near-normal atmosphere. We would like to thank our buyers once again who were active on site and remotely, as well as our vendors for having brought yearlings of this quality to the ring.

“After a year “off”, the v.2 makes its comeback tomorrow at Deauville. This sale has produced some very good horses, such as Coeursamba, Teppal and Olmedo, and we hope that it will continue on in the same vein following the success of the August Sale.”

There was a strong start to proceedings, with four six-figure prices within the first 10 lots through the ring. The early leader until the final hour of the sale was lot 182, the sole offering in the catalogue from John Kilpatrick's J. K. Thoroughbreds. The colt by Wootton Bassett (GB) is from a Juddmonte family which includes the yearling's listed-winning grandam Short Dance (Hennessy) and the G2 Windsor Forest S. winner Lolly For Dolly (Ire) (Oratorio {Ire}). Michael Donohoe of BBA Ireland made his play for the colt online, with the hammer eventually falling in his favour at €210,000.

“I liked everything about him, he's an absolutely gorgeous individual and has a super temperament,” Donohoe said. “His sire doesn't need much of an introduction, he's the whole package and I thought he was one of the best colts selling today.”

The colt is the second foal of Fray (GB) (Champs Elysees {GB}), who was bought from Juddmonte by trainer Jim Goldie and subsequently raced in the colours of Frank Brady. That owner/breeder also races Fray's first foal, Odsonne (Fr) (Wootton Bassett {GB}), who is in training in France with Francois Monfort.

In France, there's no getting away from the champion sire Siyouni (Fr). The Haras de Bonneval resident sired a group-race double across the road from the sales on Sunday with 2-year-old filly Who Knows (Fr) and Wally (Fr), and he retained his popularity in the sale ring throughout the three sessions.

It's easy to understand why the stallion is a favourite with trainers, and Yann Barberot and Pia Brandt both signed for sons of Siyouni on Monday.

Deauville-based Barberot opted for lot 258, the first of five yearlings sold on the day by leading consignor Ecurie des Monceaux. The well-related colt is out of a three-parts sister to the treble Group 1 winner Persian King (Ire)(Kingman {GB}) and bought a final bid of €195,000 from Barberot on behalf of Haras de Bouttemont.

The trainer noted, “I've bought him for one of my owners, Finn Blichfield.”

Siyouni's 15 yearlings sold through the August Sale returned an average of €307,667.

“Bon Ho is an international owner and owns the Everest winner Classique Legend (Aus) as well as Southern Legend (Aus), who is Group 1 winner in Hong Kong,” said the agent.

The owner has also enjoyed success in Ireland recently with Storm Legend (Ire), a listed winner trained by Fozzy Stack and by the same sire as his most recent purchase. The 3-year-old has joined Caspar Fownes in Hong Kong since his victory at Naas on July 3.

McStay continued, “This colt was well presented by Benoit Jeffroy's Haras de Castillon and we're delighted to get him. There are no specific plans as yet for where he will be trained. Bon Ho is very selective about what he buys and he gets very involved in the process. He's a family friend and I'm very fortunate that he has asked me to help him.”

The May-born colt is out of the dual winner Precious Dream (Mr. Greeley), a daughter of the Oaks winner Lady Carla (GB) (Caerleon {Ire}) who in turn traces back to the Meon Valley Stud foundation mare Odeon (GB).

Haras de Castillon's second big sale of the day came at the same price of €185,000 for lot 342, a Kodiac (GB) first living foal of the listed winner Charm Appeal (Fr) (Canford Cliffs {Ire}). Richard Venn did the bidding on the filly who will go into training in Deauville with Stephane Wattel.

A Quartet For America

“I've come two other years and the first couple of days are obviously high-level horses with a lot of pedigree. I'm always fairly active at Fasig-Tipton July and then I'm less active at Saratoga in August and then active again in the second half of the September Sale. I enjoy finding a good horse before the page finds it,” he said.

Two colts and two fillies will be on the plane from France to the United States, including a first-crop daughter of Coolmore's Saxon Warrior (Jpn) offered by Haras des Capucines as lot 283. Bought for €125,000, the filly boasts a fairly international pedigree, being out of Songerie (Ger) (Shirocco {Ger}), a half-sister to the dam of Stacelita (Fr) (Monsun {Ger}), a multiple top-flight winner in France and America who went on top produce Frankel's first Group 1 winner, Soul Stirring (Jpn), in Japan.

“Good horses run anywhere and we run so much more turf racing in America now anyway, and I think it's good to have some more outcross pedigrees,” McPeek continued. “Most every horse I've seen here is eligible for the Breeders' Cup and Arqana has done a great job getting us here. Now I just have to figure out how to get home!”

The trainer noted that Three Chimneys Farm and Walking L Thoroughbreds will partner in the fillies. He added, “We will probably do a couple of Magdalena partnerships for the colts and we'll offer them out to some regular clients. Typically those are 20% shares.”

The colts include a second-crop son of the Aga Khan Studs stallion Zarak (Fr), sold by his breeder Domaine de l'Etang as lot 328 for €100,000. He too has a deep pedigree behind him which traces back to the good Wildenstein family of treble Group 1 winner Aquarelliste (Fr) (Danehill), who is his third dam.

Adding to the global flavour of the sale was Australian owner/breeder Matthew Sandblom, who bought lot 232, a filly from the first crop of crack sprinter Harry Angel (Ire) for €47,000 from Jedburgh Stud.

The star of the Haras de Montaigu draft on the final day was an elegant dark brown colt very much in the mould of his sire Almanzor (Fr), who fetched €150,000.

The colt's dam Hunza Dancer (Ire) (Danehill Dancer {Ire}) is a full-sister to Air Chief Marshal (Ire) and half-sister to G1 Irish St Leger winner Flag Of Honour (Ire) (Galileo {Ire}) who has already produced three winners, including the listed-placed Samothrace (Fr) (Iffraaj {GB}). Sold as lot 197, he was bought by Laurent Benoit of Broadhurst Agency on behalf of football star Antoine Griezmann and will be trained by Philippe Decouz.

Benoit also signed for a statuesque daughter of Camelot (GB) from the consignment of Lady Chryss O'Reilly's Haras de la Louiviere at €160,000. One of the first horses through on Monday, lot 174 is a daughter of the young Wootton Bassett mare Elide (Ire) who is herself a granddaughter of George Strawbridge's In Clover (GB) (Inchinor {GB}), the dam of of a trio of Group 1 winners in Call The Wind (GB), With You (GB) and We Are (GB).

Galiway (GB) had five yearlings catalogued for the Arqana August Sale, all from his home farm of Haras de Colleville. One failed to sell but the remaining quartet returned an average price of €183,000: not bad from Galiway's opening fee of €3,000. After his first crop of runners, which included the G3 Prix La Rochette winner Kenway (Fr), the stallion's fee rose to €10,000 and then along came G1 Prix Jean-Luc Lagardere victor Sealiway (Fr) in his second bunch of runners and the price rose again to €12,000. Sisters to both those stakes-winning colts sold on Saturday for €220,000 and €380,000, respectively.

Another two Galiway fillies feature in the V.2 Sale which begins at 3 p.m. on Tuesday and will conclude the sales action in Deauville until October.