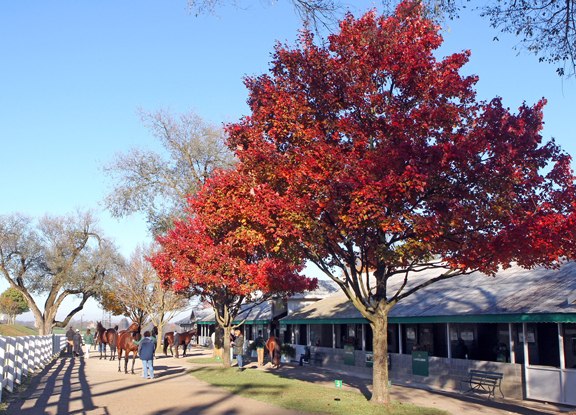 LEXINGTON, KY – The Keeneland November Breeding Stock Sale marched into Book 3 Thursday in Lexington with continued competitive bidding. Nine horses sold for $200,000 or over during the session, led by the 3-year-old broodmare prospect Saucy Dame (Distorted Humor) who sold to Stonestreet Thoroughbred Holdings for $320,000. Two weanlings topped the $200,000 mark, with a colt by Speightstown bringing the top foal price of the day when selling to Evergreen Stable for $285,000.

“I think it's great,” Tom VanMeter, whose VanMeter-Gentry Sales consigned the session topper, said of the market. “I don't think it's absolutely killer, but nice mares like [Saucy Dame] are selling. I've been trying to buy mares and getting shut out. And the weanlings are good. You walk up there, they are ferocious to buy them, if they are good. But we've bought a few. So we're happy and we're rocking on.”

Bloodstock agent Chad Schumer, who sold the day's second-highest priced weanling, said there were plenty of opportunities in Book 3 of the reformated November sale–which started with a single Book 1 session Monday.

“I think this is Book 3, but it really feels like Book 2 to me,” he said. “Book 2 tends to have some soft spots because you're transitioning from the very top of the market to the more middle of the market. So I try to work Book 2 pretty hard for that reason.”

The Keeneland November sale continues through Nov. 16 with sessions beginning daily at 10 a.m.

Saucy Dame (Distorted Humor) will be joining the broodmare band at Barbara Banke's Stonestreet after selling for a session-topping $320,000 Thursday at Keeneland. The 3-year-old filly, who sold as a broodmare prospect, is a daughter of Storm Beauty (Storm Cat), a half-sister to champion Gold Beauty (Mr. Prospector). Saucy Dame is a half-sister to graded stakes winner Buffum (Bernardini) and graded stakes placed Stormy West (Gone West) and Renaissance Lady (A.P. Indy).

“She was a Distorted Humor, who is a great broodmare sire, and she comes from a great female family,” Stonestreet's John Moynihan said of the filly's appeal. “It's a great female family and all of the daughters from that family have produced. If this one goes on to produce horses like some of the other daughters have, we'll be in good shape.”

This wasn't the first time Moynihan had purchased a member of the family at auction.

“I actually bought her mother years ago as a yearling,” he said.

Moynihan purchased Storm Beauty for $650,000 at the 1996 Keeneland July sale. The dark bay went on to win the 1998 Miss Preakness S. and Wilma C. Kennedy S. for Robert Lewis and trainer D. Wayne Lukas. The mare sold, in foal to A.P. Indy, to Brushwood Stable for $2.2 million at the 2004 Keeneland November sale.

Saucy Dame (hip 1386) was consigned to Thursday's sale by VanMeter-Gentry Sales as agent for Louise Lally's Summerplace Farm. Summerplace purchased the chestnut filly for $200,000 as a Keeneland September yearling in 2016. She won two of nine starts for Summerplace and trainer Eddie Kenneally.

“We are pleased with that result,” said Tom VanMeter. “She is a breeder's mare. We put her back here [in Book 3] for a reason. We wanted her to stand out and I think she did. She had 100 shows–100 shows is pretty impressive for a mare.”

A colt by Speightstown was the highest-priced weanling, and second highest-priced lot overall, of Thursday's fourth session of the Keeneland November sale when selling for $285,000. The weanling is out of the unraced Magical Dream (Malibu Moon), a half-sister to multiple Grade I winner Dream Rush (Wild Rush). Dream Rush is the dam of Grade I winner Dreaming of Julia (A.P. Indy) and the speedy Atreides (Medaglia d'Oro), both of whom were bred and raced by Stonestreet Stables. The operation's John Moynihan signed the ticket on hip 1282 in the name of Evergreen Stable.

“I bought him for a partnership,” Moynihan said. “He may be resold and he may be raced, we'll just see.”

“It's a great price and he is going to great owners,” Archie St. George said after watching the colt sell. “I wish them the best of luck. Hopefully we will see him down the road and that is the important part. Credit goes to the breeder; they do a very good job. The price exceeded expectations.”

Blue Heaven Farm purchased Magical Dream, in foal to Pioneerof the Nile, for $210,000 at the 2014 Keeneland November sale. The colt she was carrying at the sale returned to bring $300,000 at the 2016 Fasig-Tipton Saratoga sale. The mare's More Than Ready colt sold to Spendthrift Farm for that same price this past August at Saratoga.

Magical Dream was bred to Candy Ride (Arg) this year.

Tom Bachman of Fairview was at the Keeneland November sale looking to restock his broodmare band. Before heading for the airport for a flight home to California, the breeder bid $230,000 to secure the 9-year-old Harbor Mist (Rockport Harbor), in foal to Frosted, from the Taylor Made Sales Agency consignment.

“She's a young mare and I think Frosted is going to be a nice sire,” Bachman said. “We'll breed her to a horse in California and make that [in utero foal] a Cal-bred.”

The stakes-winning Harbor Mist (hip 1228) is out of Jaramar Miss (Risen Star) and is a half-sister to graded stakes placed Jaramar Rain (Thunder Gulch). The mare, then in foal to Speightstown, was purchased by WinStar Farm for $410,000 at the 2015 Keeneland November sale. In foal to Distorted Humor, she RNA'd for $270,000 at last year's Keeneland November sale.

Fairview was represented by three of the top five lots during the final Barretts August Select Yearling Sale three months ago, led by a $230,000 son of Square Eddie. The farm topped the 2017 edition of the sale with a $300,000 filly by Bodemeister. Both yearlings are out of Bachman's mare North Freeway (Jump Start), who also produced multiple stakes winner Take the One O One (Acclamation).

“My broodmare band is getting up in average age, so I'm trying to drop it down,” Bachman explained. “So that's what this mare is going to do. I bought a Malibu Moon mare earlier and she is going to be in the same program.”

He agreed the market for mares was tough in Lexington this week.

“A young, good-looking mare who is bred right is very tough to buy,” Bachman said.

Chad Schumer saw a golden opportunity at Keeneland last January and struck, purchasing Vegas Trip (Aldebaran), in foal to Flatter, for $23,000. The mare's Flatter colt (hip 1474), co-bred with Glidawn Stud's Gerry Burke, returned to the Keeneland sales ring Thursday and rewarded the investment when selling for $200,000 to deMeric Stables.

“The mare is a half-sister to two graded stakes winners and she had a good produce history,” Schumer said of the 10-year-old mare's appeal. “Her previous Flatter had sold very well to a great judge in Mike Ryan. So at that price, I couldn't resist.”

“He was absolutely lovely when he was born, but he kind of went through an awkward stage and we weren't entirely sure we were going to bring him here,” Schumer admitted of the weanling.

“But he really came on the past three weeks, I mean unbelievably strong. So he is definitely headed in the right direction. And his half-brother, an Into Mischief, sold for $270,000 to Chad Brown [at this year's Keeneland September sale]. That really encouraged us to go on.”

Vegas Trip was bred back to Lea this spring and Schumer said of her, “Another client has the mare, so it's still in the family.”

Of his operation, Schumer explained, “We always dabble a little bit here and there with partnerships. We have been buying for clients for a long time and sometimes we take a leg here and there and we've done some breeding partnerships with some of the other consignors.”

Burke has been buying weanlings at Keeneland to pinhook in his native Ireland for two decades, but he enjoyed two sales successes in Lexington Thursday. In addition to the Flatter colt, Burke sold a colt from the first crop of GI Breeders' Cup Dirt Mile winner Tamarkuz for $140,000 as the first horse through the ring in Book 3. He had purchased the weanling's dam, with the colt in utero, for $36,000 at last year's Keeneland November sale.

“We've become very good friends and he's seen what I've done and he said, 'I want a leg of a mare here or there, too,'” Schumer said of Burke.

The partners did experience some of the lows of the sales game Thursday, as well, when forced to scratch hip 1196.

“We had a beautiful Flintshire (GB) filly in today as well, but we had to scratch her because she got sick,” Schumer said. “That was a bit of a blow. Three weeks ago, I would not have thought [the Flatter colt] would have made the sale and I was sure she would shine. And it flipped. That's the vagaries of doing this.”

Longtime Indiana breeder Tommy Wente decided to make a change some four years ago and, along with partners Shane and Calvin Crain, leased St. Simon Place and set about setting up a commercial broodmare band on the 380-acre Lexington farm. The new program enjoyed its biggest success to date when a colt from the first crop of multiple graded stakes winner Upstart sold for $195,000 to Clear Ridge Stables Thursday at Keeneland.

“When he was born, he was just a knock out from day one,” Wente said of hip 1256, who was co-bred with Scott Stephens. “He was very, very correct and very pretty. He was a pretty colt with a beautiful walk and a beautiful neck.”

Of breeding to a first-season sire, Wente said, “I think you can find value because no one has them. They haven't been on the track, so they can't ding them on anything. So if you get a good-looking first-year baby, people are willing to take chances. But when you get on that bubble year, when those horses are starting to go to the track, we back off of them. Because it's hard to make a stallion. A lot of them don't make it, so you kind of want to stay away from those years. We did well with the first-year studs because you can't really get hurt and you don't have to put a whole lot of money into them.”

Of Thursday's result, Wente admitted, “It's kind of surreal because he was the most expensive horse I've ever sold. We just basically got into this. We leased this farm about four years ago.”

Wente continued, “I was an Indiana guy–I was breeding these cheap Indiana-breds and I was just not going anywhere. It's just the same old stuff and you can't make any money and you're kind of stuck in a rut. So when I was offered a chance to come over here, it was either now or never because I was 45 or 46 at the time. I wasn't getting any younger and you kind of know where you want to be, but you've just got to get there. We leased the farm and then we had to start from scratch.”

The St. Simon Place broodmare band currently numbers 15 head, plus an additional handful of mares owned in partnerships. Wente is looking to improve the farm's bloodstock little by little over the next several years.

“We want to jump up our program every year,” he said. “So we started at the bottom and we are trying to jump our program up. This year's babies are going to be from higher stud fees and next year's are going to go up a little bit more.”

Joyous Music is an example of that philosophy. The 10-year-old mare is currently in foal to Violence and is booked back to Street Sense.