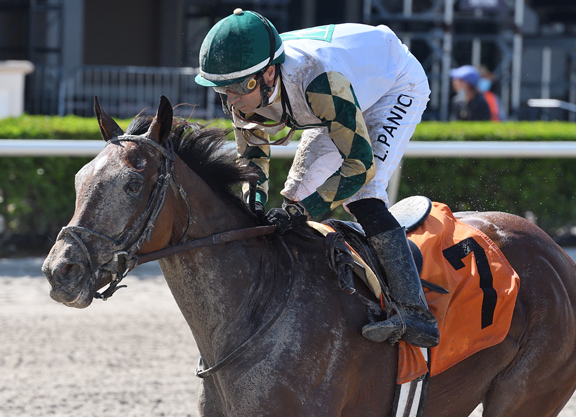 Sent off as the 12-5 second choice to his slightly more accomplished stable companion Ete Indien (Summer Front), Sole Volante (Karakontie {Jpn}) was dropped out the back early by Luca Panici, but came with a flying finish in the final furlong to defeat longshot Jesus' Team (Tapiture) by 3/4 of a length in what could be a prep for the GI Belmont S. in New York in 10 days' time.

Drawn widest in a field scratched down to six, Sole Volante flopped out of the gates and was content to race in a trailing position, as GI Curlin Florida Derby runner-up Shivaree (Awesome of Course) refused to allow GII Fasig-Tipton Fountain of Youth S. romper Ete Indien an easy time of it on the lead, getting the opening half-mile in a sharp :45.10. Sole Volante was still out of the picture and the better part of 10 lengths behind those dueling front-runners entering the final three-eighths of a mile, but he began to warm up to the task nearing the stretch after six panels in 1:09.20. Switched out into the four path, he accelerated noticeably at the eighth pole, raced past Jesus' Team and had a safe margin on that one at the wire. Shivaree held for third ahead of 3-5 Ete Indien.

The Frenchman was not unduly upset by the performance of the beaten favorite.

“He needed the race,” Biancone surmised. “When you go to the front, it's harder, and needed the race more. Ete Indien ran a good race, just got a little tired.”

Winner of the Pulpit S. on the local turf course last November, Sole Volante was third in the Mucho Macho Man S. ahead of a flashy defeat of then undefeated Independence Hall (Constitution) in the GIII Sam F. Davis S. at Tampa Feb. 8. He was last seen finishing a game second to King Guillermo (Uncle Mo) in the Mar. 7 GII Tampa Bay Derby, the strength of which was validated when King Guillermo returned to round out the exacta behind Nadal (Blame) in the faster division of the GI Arkansas Derby May 2.