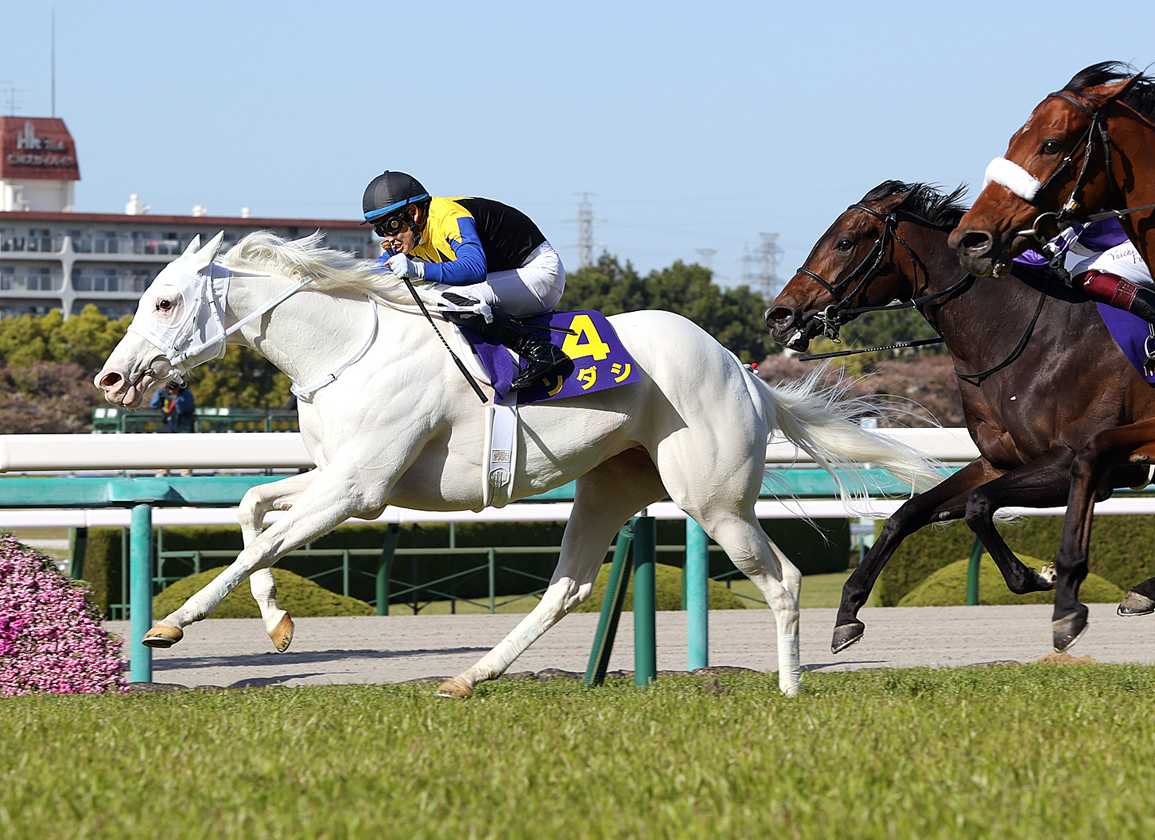 The world's most recognizable–and most talented–white Thoroughbred, Sodashi (Jpn) (Kurofune), puts her unblemished record on the line against a full field of fellow 3-year-old fillies in Sunday's G1 Yushun Himba (Japanese Oaks) going a full circuit of the Fuchu Racecourse at Tokyo.

Not one of the 68 horses Sodashi has faced through her five career starts have managed to finish ahead of her, even if she never wins by a space. The Makoto Kaneko runner debuted with a 2 1/2-length victory over 1800 metres last summer, but has since been restricted to the metric mile, her defeat of Satono Reinas (Jpn) (Deep Impact {Jpn}) in the G1 Hanshin Juvenile Fillies securing her divisional honours. She made her seasonal debut in the G1 Oka Sho (Japanese 1000 Guineas), raced prominently throughout and just held a late lunge from the outposted Satono Reinas to remain undefeated, if only just. Sunday's trip looms a question mark for Sodashi, and to be fair, most of the field, but trainer Naosuke Sugai is bullish on Sodashi's chances.

“People ask about the distance, but I've had my sights set on the Oaks from her debut and though she was great in the Oka Sho, I know she can handle more ground,” he said. “I'm hoping she'll listen well to jockey Hayato Yoshida and not get in any fights with him. She has a lot of power, so I think a track that has a bit of cushion to it would be best.”

A half-dozen of those who ran behind Sodashi in the Guineas return to see if they can turn the tables here.

Fine Rouge (Jpn) (Kizuna {Jpn}), who won her maiden at second asking at headquarters last October, sat a midfield trip in the Oka Sho and struck a bit of interference in the straight before staying on to be a close third. She has the right to improve second-up.

“I rode her in fast work this week in between two training partners,” commented jockey Yuichi Fukunaga. “She was listening and responding to my cues well. I think she's in excellent condition. The competition is strong but her racing in the Oka Sho was totally on par with the horses that finished ahead of her.”

Kukuna (Jpn) (King Kamehameha {Jpn}) is an intriguing upset possibility. Though she only owns a single victory from sixt trips to the post, she has held her own against some of these, including a close third as the favorite in the aforementioned Queen Cup. The Carrot Farm galloper raced in a detached last for the first half of the Guineas, but she was running hard through the final stages, and despite crossing the line in sixth position, clocked a slick :33.2 for her final 600 metres. That time was second only to the :32.9 turned in by the Japanese Derby-bound Satono Reinas and was 0.6 seconds faster than Sodashi.

WATCH: Sodashi makes it five in a row in the Oka Sho