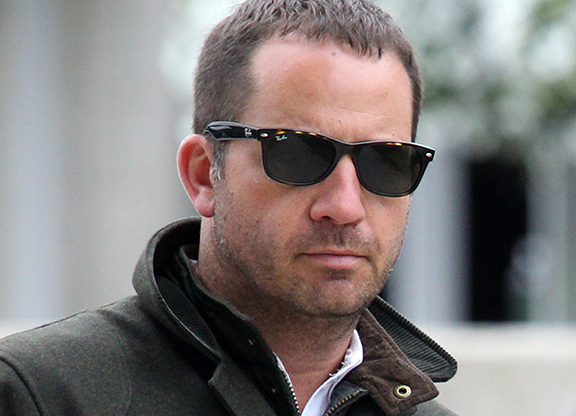 My top two picks are between Nyquist and Runhappy, but I will probably give Nyquist the number one slot. We bought several Nyquists ourselves and I've seen several at the training sales that have all looked like Classic horses, but with enough speed to run in the Del Mar or Saratoga 2-year-old races. I was pretty impressed with what I saw in them at the sales. They have good scope, good minds, and they have great bodies on them. Of the ones we've purchased, they've all developed really well. They're a pretty uniform group and I've liked everything I've seen about them.

The Runhappys look pretty nice too. I've been really pleased with the ones we have in our portfolio, and the ones from the sale. At the OBS March sale, I remember Hip 320 was a beast and brought $475,000.

I'm going to go with Air Force Blue as an under-the-radar horse. Because he didn't run here, I think a lot of people don't know him, but War Front is emerging as a sire-of-sires and this horse was very well bred and well thought of by the Coolmore and Ballydoyle bunch.

We bought a filly by him at the last sale that I think is magnificent. I'm really excited about her. She's a queen.  I've seen a few others at the yearling sales and in my travels. I didn't set out to find them, but I always wound up with a few of them on my short list.