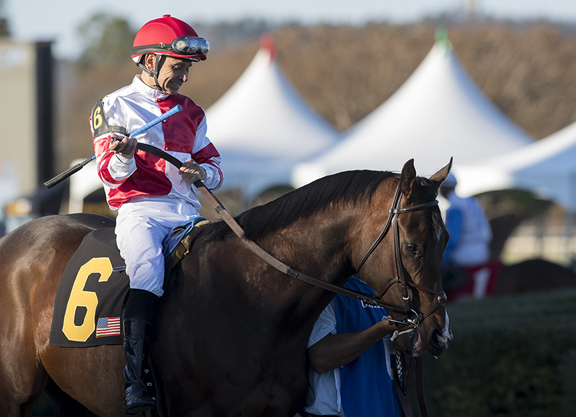 In what he called the most difficult decision of his Hall of Fame career, jockey Mike Smith has chosen to rider GI Arkansas Derby winner Omaha Beach (War Front) in the GI Kentucky Derby, he told the TDN. His other choice was to ride 'TDN Rising Star' and GI Santa Anita Derby winner Roadster (Quality Road).

“[Omaha Beach] is coming off races where he beat two of the very best 3-year-olds out there in Game Winner (Candy Ride {Arg}) and then Improbable (City Zip),” Smith said. “The connections of both horses fully understood my decision and there were no ill feelings. [Roadster's trainer] Bob [Baffert] was great about it. I know how much talent Roadster has. I just hope I'm not put in a position where I see him running right by me in the stretch in the Derby.”

Baffert has won five Kentucky Derbies and Omaha Beach's trainer Dick Mandella has never had a horse finish on the board in six Derby tries. Smith said that Baffert's record was definitely something he weighed when making his decision. Last year, Smith rode Justify (Scat Daddy) to a Triple Crown sweep for Baffert.

“Bob's record is one of the things that made this decision so difficult,” he said. “I chose to take off a horse trained by one of the greatest trainers of all time.”

Via text, Baffert confirmed that he had chosen Geroux to take over on Roadster.

Smith's decision could very well tilt the odds in the Derby as his decision will carry a lot of weight with handicappers and could make Omaha Beach the race favorite.