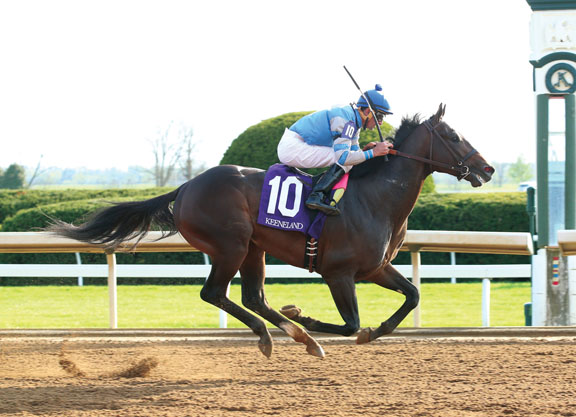 Watch Me Whip (Smart Strike), unveiled in the Keeneland finale Friday at better than 10-1 odds off an unassuming worktab at Gulfstream and most recently at Churchill Downs (5f in 1:01 1/5 {3/11} Apr. 10}), covered all the ground, but drew off in the lane to a promising first tally worth of 'TDN Rising Star' status. Away decently from a high draw, the $330,000 Keeneland September acquisition tracked from just off the pace while out wide early. He seemed to be climbing slightly into the bend, but found his best stride as the stretch approached and began to pick horses off ominously. Longshot pacesetter Stone Mountain (Discreetly Mine) provided token resistance to midstretch, having posted a :46.67 half, but Watch Me Whip was far too strong and galloped home a powerful 3 3/4-length graduate. Perfect Partner (Curlin)–a $550,000 OBSMAR pick-up–rallied from out of the clouds to just nip Stone Mountain for second. According to Trakus data, Watch Me Whip covered the most ground of any runner in the field, and 23 ft. (approx. 2 3/4 lengths) more than the runner-up.