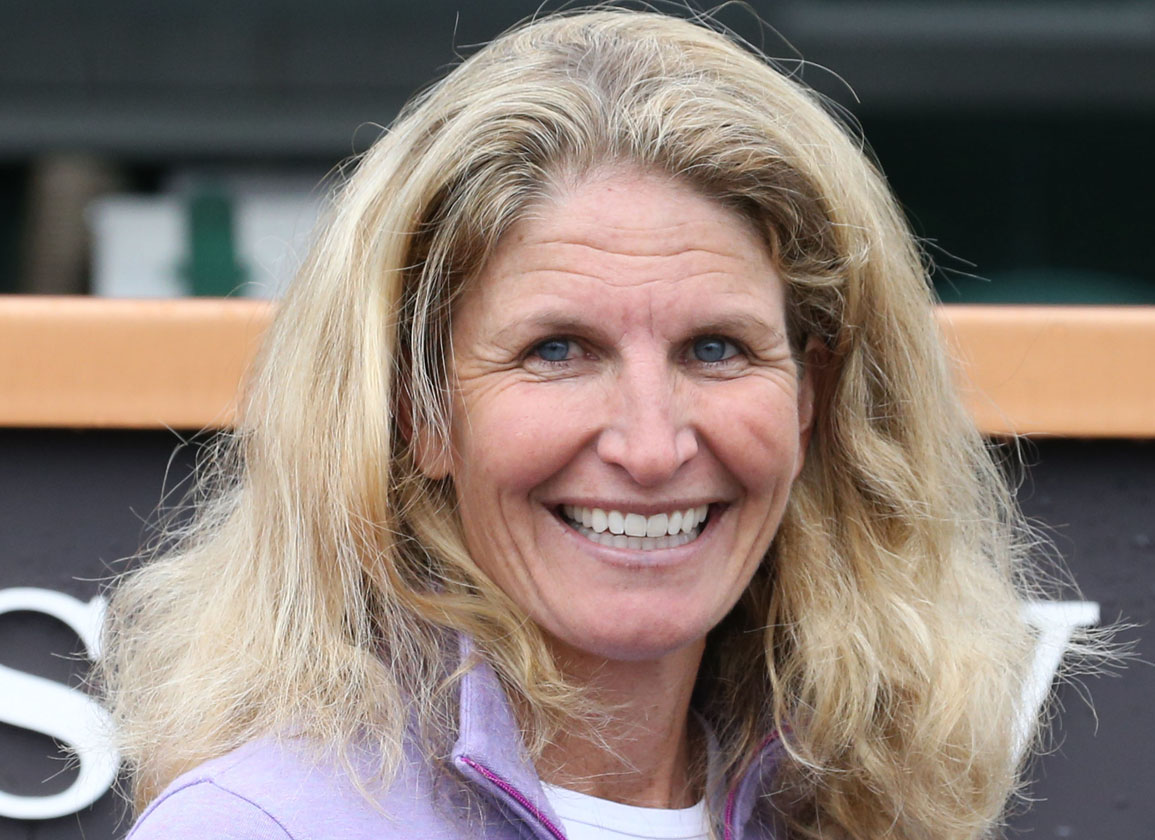 The daughter of a racing steward and a steeplechase trainer, Maryland native Helen Pitts was destined for a career on the racetrack. After working for several steeplechase trainers, she made the move to Kentucky to work for Kenny McPeek. When McPeek stepped away from training in 2005, Pitts took over and had her very first winner that same day. Over the years, she has reached the winner's circle with many unforgettable racehorses, including Hall of Fame champion Curlin and her all-time favorite trainee, MGISW Einstein (Brz).

HP: My dad was a steward at the racetrack. He worked in Maryland for 20-some years and was there when Kent Desormeaux, Edgar Prado and those guys were there. My mom trained steeplechase horses, so this was kind of in my blood and I didn't have a whole lot of choice. I did fox hunters and pony club growing up and went to the races a lot. Dad always tried to deter me from going to the racetrack, but I rode steeplechase horses and ended up working for several steeplechase trainers. [Hall of Fame steeplechase trainer] Jack Fisher got me started and then I ended up also going to Frannie Campitelli at Pimlico.

After that, I started working for Kenny McPeek. He got me to move to Kentucky. I learned a lot from Kenny and was around really good horses. I galloped Take Charge Lady and Harlan's Holiday. When Kenny retired to do bloodstock, I was fortunate to carry on from there.

On July 1 of 2005, the first horse I raced actually won at Churchill Downs. Her name was Cat Quatorze (Louis Quatorze) and I'll never forget it.  Then I won my first Grade I that fall with a filly called Sweet Talker (Stormin Fever) at Keeneland in the Queen Elizabeth II Challenge Cup S.

KP: How did your steeplechase background help you as a flat trainer?

HP: They intertwine a lot actually. Steeplechase is a lot more fitness-focused because they have to go so much further. In terms of horsemanship, I think I benefitted from it and it did me a world of good.

A lot of steeplechase horses are older flat horses. My mom is a wonderful horsewoman and she would take flat horses that would have a year off from a bowed tendon and she would bring them back to perfect health and they would win countless races for her.

KP: Where is your stable based today?

HP: Kentucky is pretty much home for us. Churchill Downs is our base basically year-round and I'm at Highpointe Training Center just outside of Louisville in the winter. I give a lot of horses time off in the winter to let them down a bit so they are ready to roll in the spring.

HP: I'd say we normally have around 10, but that number can go up and down especially in the spring when we get babies in. I do think back on the days when I would have 40 horses in the barn, but the game has changed a lot since then. It's hard to find help these days and so to be honest, 10 is a good number for the stage I'm at.

I have good owners and a lot of my owners breed their own, so we can take our time with them and I'm not pressed to be running babies in May. I train for great people, some of whom have been with me since I started.

KP: Who would you say has been your biggest mentor throughout your career?

HP: That's a tough question. Kenny gave me the opportunity to be where I'm at today. He introduced me to a lot of people and put me in a great position. I learned so much from him.

Looking way back, it would also be my mom. She's a wonderful horsewoman and she's 87 now, but she's actually in Kentucky this week selling babies at the sale. She still has the farm in Maryland and breeds babies. She is a very good horsewoman and gave me my work ethic to put me where I'm at today.

This is a hard question because there's also Jack Fisher and Frannie Campitelli. They both had big influences on my career. I think everybody helps you get somewhere.

KP: What horse has been the most influential to your career?

HP: Oh, it would have to be my boy Einstein (Brz) (Spend a Buck). He was my best friend and I had him for his whole career. He took me all over the country. He was the coolest horse and had so much personality. I would pull up in my car in the afternoons and he would start hollering when he saw me.

Then there's also Curlin, who put me on the map. I only got to run him once before they sold him, but I took the time with him and did right by him. He made it all worthwhile for that one start and now I can say I trained Curlin. He helped me get my name out there.

What do they say? Good horses will make you look good.

HP: My employees are great. I have one couple who has worked for me since I first started.

We're very small and hands-on. If I'm not getting on them myself then I'm on the pony with them. We give them a lot of TLC and it doesn't matter to me what type of horse they are because they all get treated the right way and they're all special to me. They all think they're big horses in my eyes.

HP: I'm not going to sit here and say that they're bad for the sport. I give them all a lot of credit. I think that's what some owners want these days. They want the high-percentage guys. If you list the names of super trainers today, they're very good horsemen and very good trainers. With the way the game is and the way finding help is today, what they do is difficult.

I do think there is a different aspect in being involved with a big outfit as opposed to a smaller one. There are pluses and minuses to it.

HP: I just love the horses. I love seeing them come along and develop and I love the competitiveness of it all. Right now I have a little filly named Zawish (Mshawish) who is two for two. This filly just thinks she's King Kong. She loves the game and loves to train. I actually trained her mother, who was owned by the same clients and was their first-ever racehorse.

HP: There are many different approaches you could take with this one. Would I love consistency within our sport and to have everyone on the same page? Absolutely. I just hope our sport continues to get better and better, but it seems like it's going in the right direction.

It's hard between finding help and keeping your system rolling, which I have found is easier now with the size that I'm at. Even when I worked for Kenny, you would walk in some days and find out you're missing a groom so you're rubbing down four and galloping seven. That's part of it and you have to be able to roll with it.

This game is hard. You can be on the absolute biggest high in the world and it will jerk you down in a minute. I'll never forget the morning after I won my first Grade I, I was breezing horses and had a 2-year-old break down. That will jerk the heart right out of you and you have to be able to tough it out. A lot of it is just the ups and downs. It's definitely a game of highs and lows.

KP: What is your bucket list race that you hope to win someday?

HP: Obviously everyone's goal is to get to the Kentucky Derby or the Oaks. I ran in the GI Breeders' Cup Classic with Einstein in 2009. It was the year Zenyatta won it. Einstein actually won the GI Santa Anita H. that year and I was the first woman to win that race, so that was awesome and I felt like that was a great feat.

I would love to win a Breeders' Cup race or of course the Oaks or the Derby–something of that prestige.