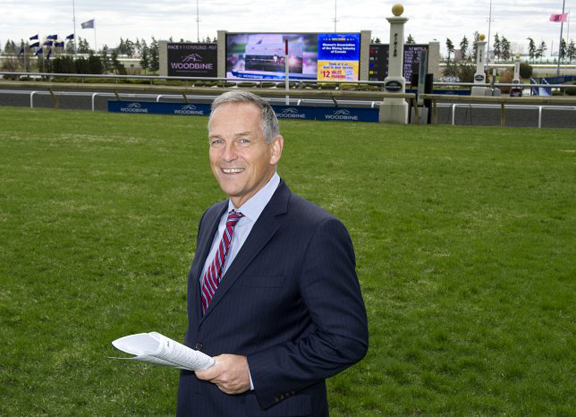 Woodbine's darkest hour occurred on Mar. 31, 2013, the day the gravy train came to a halt. Ontario's Slots at Racetracks Program was ended and no longer would any portion of the revenue from the machines at Woodbine or any of the province's racetracks be given to support racing. The tracks were more or less told they were on their own, which created a dire situation and left open the distinct possibility that the entire industry could disappear.

Some 2 1/2 years later, things are far from perfect for Woodbine, Fort Erie or any of Ontario's many harness tracks. But an acute case of despair has been replaced by hope for the future. Cases in point: Woodbine's 2015 meet, which ended Nov. 29, showed an 11.3% increase in handle and $11.06 million was bet on Queen's Plate Day, smashing the old record. Woodbine executives will tell you that their success this year had something to do with luck, but more so from a new attitude at the Woodbine Entertainment Group that has arisen since the slots money was taken away. Put someone's back up against the wall and they are forced to react.

“Truth be known, to a large extent we were living off the backs of the slot machines,” said Woodbine Entertainment Group CEO Jim Lawson, who is also the Chair of the Board of Governors of the Canadian Football League. “Racing businesses in Ontario, Woodbine included, had become somewhat complacent. We became too successful in the sense that land-based gaming took off and the racetracks were huge beneficiaries of it. States and provincial governments, as they are wont to do, want to balance their budget and they realized there's a huge chunk of money there going to the racing industry. They asked, 'Do they really have a viable commercial business or are they just living off the backs of the slot machines?'”

Western Fair harness track CEO Hugh Mitchell offered, “The racetrack slots program did a lot of good for our industry on many fronts because of the infusion of significant dollars that supported purses, the breeding industry and the racetracks. The negative, frankly, was that it created a false economy for everyone in the industry. Because of that we probably collectively took our eyes off the ball and lost our focus and our incentive to push the gambling side of our business, which is what ought to drive our business.”

That's the downside of slot machines at racetracks. A track gets them, the money comes way too easily and horse racing becomes an afterthought, something that is easy to ignore.

Perhaps no racing industry in the history of the sport has seen more dramatic ups and downs than Ontario has since the slots program was implemented in 1988. For almost 15 years Ontario racing was held up as the poster child for the right way to integrate racing and gaming. The Ontario Lottery and Gaming Corporation ran the slots operations at the tracks and the tracks collected their share of the profits for purses and operating expenses. With huge purses, Ontario racing flourished.

Then it all came crashing down.

And then they started to put the pieces back together again.

All segments of the racing industry, both Standardbred and Thoroughbred, banded together and made a compelling argument to the government that it simply couldn't destroy an entire industry overnight, especially when so many jobs were involved. The government came back with a five-year plan in which it handed over $400 million to replace the lost slots money. The industry was saved, but no permanent solutions were offered and the government made it clear that the handout was a one-time deal. If racing in Ontario was going to make it at the expiration of the five-year plan it was going to have to get its act together and find a way to make the sport work again.

“We came out of this period of complacency and we woke up to the fact that we have to do things better,” said Lawson. “This industry needed to shake itself up.”

Woodbine was being forced to find a way to make horse racing self-sustainable.

“We said we don't have this slot money anymore, so we need to roll up our sleeves and find ways to do this better; the onus is on us,” Lawson said. “We need to come up with innovative wagering products, we need to look at how we can compete with lottery products. We need to introduce a new and better guest experience. The only way we are going to introduce new people to the racetrack is to give them a better guest experience. Even the idea of clockwise racing falls into that category of a better guest experience. We think it will be exciting and hope people will say, 'Hey let's go out to Woodbine today, they're running races the other way. That should be fun.' We introduced the Jackpot High 5. We had a lottery bet at the Queen's Plate and are hoping to have more lottery bets in the future, ones with larger and larger jackpots.”

Lawson understands that, which is why he will tell you his work is far from done. The 2016 season will begin the third year of the five-year plan and 2016 and 2017 must yield continued growth and success of the horse racing product. That, Lawson said, is key to convincing the government that horse racing has a future and that the government should be receptive to its needs.

But the argument goes beyond dollars and cents, he said. Lawson believes the key for Woodbine, or any racing industry, to get government support is to show how many jobs are involved in the everyday business of the sport.

“When we sat down with the government, the most important thing to us was to show them the impact [closing down] would have on people's lives,” he said. “One thing this government cares about, and any government cares about, is jobs. They also care about revenue, but it's much more than that. We had to show them what a labor-intensive industry this is. When you spend time around the racetracks you begin to appreciate the skill levels of the grooms, the exercise riders, the blacksmiths. There's a whole economy of people working on farms and racetracks and, though they have a skill, without racing they wouldn't have any place else to work. There are thousands of these people. Statistics show that there is between 1.7 and 2 jobs for every Thoroughbred living on our backside.”

When Lawson says horse racing must become self sustaining at Woodbine he means that the track can never again expect to receive any government handouts. What he does not mean is that WEG must turn a profit solely on the revenue it receives from parti-mutuel wagering. There are too many obstacles in the way to think that can happen. Woodbine has a huge aging plant that needs constant care, it insists on offering big purses and high-class racing yet has to compete for horses with tracks that have tens of millions in slot money at their disposal and, according to Lawson, they pay tax rates that are not in line with the rest of North America.

With a good relationship with the government, he believes many of those issues can be solved, starting with a tax break. But the real prize will come if there is a government-backed expansion of gaming at Woodbine, which would include a hotel and a full-fledged Las Vegas style casino. Lawson is hoping for the same at the WEG-owned harness track, Mohawk. While Woodbine would not receive any cut from the casino money it does serve as the landlord for the on-track gaming facilities. If the casinos are expanded at the two tracks, Lawson hopes that Woodbine would receive a sizeable increase in the amount of money the Lottery & Gaming Commission pays to rent the land.

Another prospective source of revenue could come from the lottery itself. At the end of the five-year plan, racing will be officially integrated with the Ontario Lottery & Gaming Commission and the two have been told to work together on new gaming products that could benefit both. It's possible that sports betting could fall into that category.

Lawson worries about a lot of things, particularly the horse shortage and the lack of new blood among the ranks of owners. It's just that he worries less than he used to. Woodbine has weathered a storm of hurricane proportions, has proven that a fire has indeed been lit underneath management, is still there and should be there for along time to come.

“We used to be a poster child for how to do things right in this industry,” Lawson said. “My hope is that we can be that same poster child once again.”