Sky's the Limit for Tinnakill Yearlings 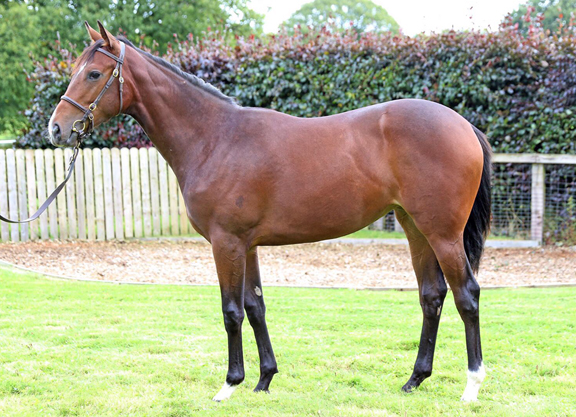 Lot 83, a colt by Sea The Stars | Tinnakill House Stud

Desert Skyline (Ire)'s victory in the G2 Doncaster Cup on Sept. 15 was celebrated in County Laois in the Irish Midlands, where the son of Tamayuz (GB) was born at Tinnakill House Stud, in the foothills of the Slieve Bloom Mountains.

Following on from a third in the G1 Goodwood Cup earlier in the summer, the 3-year-old looks a force to be reckoned with in the Cup races for the future. His success for breeders Tinnakill House, owned by Dermot Cantillon and Meta Osborne, was timely coming as it did in the lead-up to the Goffs Orby sale, where Desert Skyline was sold in 2015.

“It was a great success for the farm, we've had a good year with our pedigrees getting updates but for a horse that was born and raised on the farm to go and do it on the track was absolutely fantastic,” he said.

With the sale getting underway on Tuesday, those looking for another Desert Skyline will be eagerly viewing the Tinnakill draft at Goffs, which is laden with the well-bred yearlings that are associated with the farm. Thompson said, “We have a strong draft this year that includes some very well-bred fillies.”

One of those appears early in the sale as lot 14, a full-sister to G3 Ballyroan S. winner Stellar Mass (Ire) (Sea The Stars {Ire}) who was third in the 2016 G1 Irish Derby to Harzand (Ire). She also counts Marzelline (Ire) (Barathea {Ire}), who racked up a series of good results including placings in the G1 Santa Maria H. and G1 Yellow Ribbon S., as another half-sister.

“She is a very exciting and elegant filly, typical of Sea The Stars. She is a late April foal but has thrived in the last month and is a great walker with a fantastic pedigree. Stellar Mass finishing third in the Irish Derby is the standout piece of form,” said Thompson.

Her half-sister by Shamardal was sold by Tinnakill at last year's Orby sale for €470,000 to Roger Varian for owner Sheikh Mohammed Obaid Al Maktoum and is now called Lady Momoka.

Sea The Stars's first son to retire to stud is represented by his first yearlings at this year's sales and Tinnakill House Stud presents a colt by G1 Deutsches Derby victor Sea The Moon (Ger). Lot 83 hails from the great Aga Khan family of Australian Group 1 winner Mourayan (Ire) (Alhaarth {Ire}), and his dam is a half-sister to Mouramara (Ire) (Kahyasi {Ire}), the dam of that Sydney Cup winner.

This colt is a half-brother to G3 Prix Edmond Blanc winner Skins Game (GB) (Diktat {GB}) and Epatha (Ire) (Highest Honor {Fr}), victorious in the Listed Prix Occitanie and already the dam of three winners. Despite his pedigree, Thompson said the colt is more speedily built.

“This is a compact and strong colt which you might not expect considering he is by Sea The Moon and from a staying family,” he said. “He has a great temperament and looks to be a forward type with plenty of speed.”

A yearling whose speedy potential is rather more obvious on paper is lot 65, a son of Dandy Man (Ire) from a fast family. Out of Midnight Oasis (GB), a daughter of Oasis Dream (GB), he is a half-brother to three winners and his dam is a half-sister to G3 Ballyogan S. winner Miss Anabaa (GB) (Anabaa). The second dam is a half-sister to G1 July Cup winner Owington (GB) (Green Desert) and to the dams of Nathra (Ire) (Iffraaj {GB}), successful in the G3 Lanwades Stud S., and G1 Phoenix S winner Dick Whittington (Ire) (Rip Van Winkle {Ire}).

“The Dandy Man colt is incredibly strong and masculine with tons of bone and substance, all while being incredibly light on his feet,” said Thompson. “He is a lovely, loose-moving horse and a half-brother to a pair of horses with RPRs higher than 100 and another in the 90s.”

A grandson of Ireland's 1998 champion 2-year-old filly Sunspangled (Ire) (Caerleon {Ire}) sells as lot 185 and is the first foal of juvenile winner Sequined. Sunspangled won the G1 Meon Valley Fillies' Mile and went on to be second in the G1 Irish Oaks. The April-born colt is a son of Exceed And Excel (Aus) and is exciting Thompson and the Tinnakill team with his potential.

“He was bred on the farm and is a very masculine colt, with loads of scope,” Thompson said. “The dam is by Street Cry (Ire) and this colt looks a very classy miler type. He is a really exciting horse with a good pedigree and is an outstanding type so I hope he appeals to a wide variety of buyers.”

“She is a great size for a late foal and is a really classy and elegant filly, with very feminine looks,” Thompson said. “To add to that, she is a superb mover, one of the best we have and she offers the complete package to an owner-breeder as there is a stallion close up on the page and she is out of a Sadler's Wells mare.”

First into the ring for the Tinnakill team will be lot 11, a filly who is bred on a proven Group 1 cross.

Said Thompson, “Motivator has sired two Group 1 winners, both of them fillies and one was out of a Darshaan mare, which is the cross this filly is bred on. She is a beautiful, scopey filly who looks to be a middle-distance horse with a great outlook and fantastic temperament who walks beautifully.”

A daughter of Jomana (Ire) (Darshaan {GB}), twice successful in French Group 3 contests and from the family of G1 2000 Guineas and G1 Queen Elizabeth II S winner Mark Of Esteem (Ire) (Darshaan {GB}) and Local Talent (Northern Dancer), victorious in the G1 Prix Jean-Prat, the filly is a half-sister to four winners.