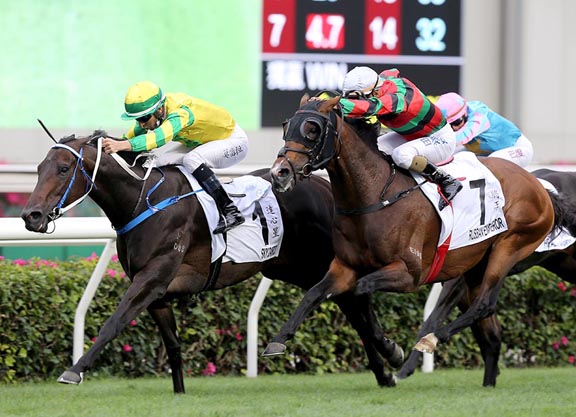 Any time you hand the car keys to Joao Moreira, you have a fair bit of confidence that good things are to come. Still, entering Sunday's HK$24-million BMW Hong Kong Derby (2000m) at Sha Tin, there were questions aplenty as to whether Sky Darci (NZ) (Darci Brahma {NZ}), the race's highest-rated galloper, would see out the trip, having underperformed in the two lead-up events. But, one race after bringing up his 100th winner for the season, the 'Magic Man' put a brilliant steer on the Kiwi-bred and the pair just lasted, as Russian Emperor (Ire) (Galileo {Ire}) and Panfield (Chi) (Lookin At Lucky) were zeroing in late.

Only sixth as the favourite to Excellent Proposal (Aus) (Exceed and Excel {Aus}) in the Jan. 24 Hong Kong Classic Mile and seventh behind Healthy Happy (Aus) (Zoustar {Aus}) in the Hong Kong Classic Cup (1800m) Feb. 21–albeit with imperfect trips–Sky Darci drew two for the Derby to the delight of trainer Caspar Fownes, who admitted his charge would benefit from a low gate. The NZ$160,000 NZB Premier Yearling (Book 1) bounced well and settled in about fifth spot early as Healthy Happy and Silver Express (Aus) (Canford Cliffs {Ire}) put several lengths on the well-backed Shadow Hero (Aus) (Pierro {Aus}) going to the backstretch. Moreira was only too happy to play the hand he'd been dealt and remain glued to the paint, and when the forwardly placed Russian Emperor slid away from the fence and the pace dropped passing midway, Sky Darci immediately seized upon the opportunity to improve, a move that would prove decisive in the end.

Pinching ground on the turn, Sky Darci was on the heels of the leading duo as Silver Express overhauled Healthy Happy nearing the straight. Pulled out around that duo, Sky Darci hit the front with a bit more than a furlong to travel and knuckled down late to become the fourth New Zealand-bred Derby winner in the last six years. Last year's G3 Hampton Court S. hero Russian Emperor proved his Classic Cup effort (at 80-1) was no fluke, just missing as the $4.70 (37-10) choice, while treble Chilean Group 1 winner Panfield hit the line hard for third. Excellent Proposal rallied down the center for fourth.

“I had to angle my way out, but once I got into the straight, I had taken the lead a little bit too early, but I knew I was on the best horse in the race and I had a lot of confidence in the horse,” said Moreira, adding to his victory aboard the late Rapper Dragon (Aus) (Street Boss) in 2017. “I knew they were coming, they were good horses as well. He's not a specialist 2000-metre horse, in my opinion, but he's got heart and even if they were coming, he was giving his best.”

It was also a second Derby success for Fownes, who saddled Super Satin (NZ) (Danehill Dancer {Ire}) to success in the 2010 renewal.

“It was the longest [last] 200 metres I've ever seen in a race, that's for sure,” the always-accessible Fownes told the HKJC notes team. “It felt like an eternity there and I'm glad he stuck his neck out and got the winning result. All in all, it's a magic day–massive satisfaction. This horse with the owners [the Kwan family], it's magic, they've been incredible people to train for.”

Sky Darci was the only member of the 14-horse field who was untried overseas prior to his import, similar to 2020 winner Golden Sixty (Aus) (Medaglia d'Oro).

Sky Darci–the third and most successful of his dam's produce to race in Hong Kong–is the 52nd black-type winner for his sire, whose 11 Group 1 winners include D B Pin (NZ), winner in Hong Kong of the Centenary Sprint Cup and twice runner-up in the G1 Longines Hong Kong Sprint. Despite his sire's propensity to throw a top sprinter, there is plenty in Sky Darci's pedigree to suggest he could stay the 2000 metres. His half-brother Chocante (NZ) was a Group 3 winner in New Zealand going an extended mile and a quarter and won the G2 Brisbane Cup over 2200 metres while finishing third in the G1 The Metropolitan H. (2400m) in Sydney. Sky Darci's second dam was a daughter of Red Chiffon, who annexed the G3 Canterbury Gold Cup going 2000 metres and was third in the 1988 G1 New Zealand Oaks (2400m).

Sky Darci is the third winner of the Hong Kong Derby in six years to be raised at Highden Park in New Zealand. Sam and Libby Bleakley's operation was also responsible for 2018 Derby hero Ping Hai Star (NZ) (Nom du Jeu {NZ}), who was unsold on a bid of NZ$40,000 when consigned by Highden Park to the 2015 NZBSEL sale. They also had their hands on 2016 Derby winner and future Horse of the Year Werther (NZ) (Tavistock {NZ}), as well as Beauty Generation (NZ) (Road to Rock {Aus}), two-time Horse of the Year who was third to Rapper Dragon in 2017 and became a two-time winner of the G1 Longines Hong Kong Mile.

Sky Darci is the fourth consecutive Derby winner to go under the hammer at the Karaka sales. In addition to Ping Hai Star, Furore (NZ) (Pierro {Aus}) was sold for NZ$210,000 as a yearling in 2016 and current Hong Kong king of the hill Golden Sixty fetched NZ$300,000 at the auction house's Ready To Run sale in 2017.

The dam of Chocante's gelded 2-year-old full-brother El Vencedor (NZ), Strictly Maternal is represented by a yearling full-brother to Sky Darci and missed to Shocking for 2020 before returning to the same stallion.