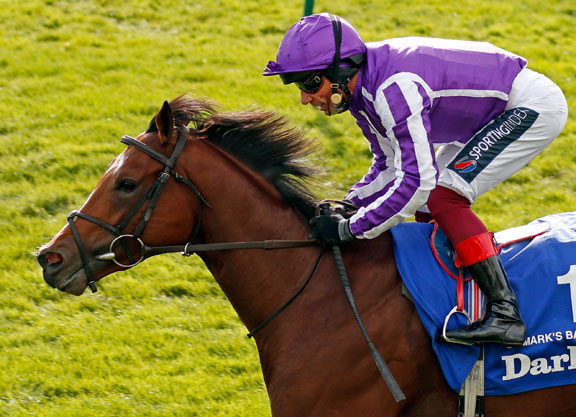 Saturday's G1 Darley Dewhurst S. proved the latest in a line of O'Brien family benefits, with Aidan stamping his authority with a one-two courtesy of St Mark's Basilica (Fr) (Siyouni {Fr}) and Wembley (Ire) (Galileo {Ire}) and Joseph's Thunder Moon (Ire) (Zoffany {Ire}) rounding out the placings. Behind that pair when third in The Curragh's G1 Goffs Vincent O'Brien National S. over this seven-furlong trip Sept. 13, St Mark's Basilica was under cover early with Frankie Dettori playing a waiting game with the pace strong up ahead. Threaded through a gap to take the advantage approaching the final furlong, the 10-1 shot who is a half-brother to Magna Grecia (Ire) (Invincible Spirit {Ire}) ultimately had more stamina on the ground than the National hero Thunder Moon and held his stablemate Wembley by 3/4 of a length, with the 11-4 favourite fading to be 1 3/4 lengths away. “You know with Aidan O'Brien, even the number two horse is a strong one,” Dettori said after steering a seventh Dewhurst winner for the master of Ballydoyle. “In fairness, he didn't put a foot wrong and did everything I asked him to. He's neat, nimble, handled the dip and a mile will be no problem in the Guineas.”

St Mark's Basilica's first three starts took place over six furlongs at The Curragh, with a debut second in a maiden July 26 followed by a fifth placing when the subject of a gamble as the 7-2 favourite for the Aug. 9 G1 Phoenix S. Off the mark next time at the expense of the impressive subsequent scorers Loch Lein (Ire) (Invincible Spirit {Ire}) and Duke of Mantua (Ire) (No Nay Never) and the G3 Round Tower S. third Coulthard (Ire) (Coulsty {Ire}) on soft ground Aug. 22, he was run out of third late by Wembley after Thunder Moon had flown in the National but despite two defeats at the highest level as a member of Team Ballydoyle was impossible to rule out here. Like Friday's G1 Fillies' Mile winner Pretty Gorgeous (Fr) (Lawman {Fr}) withdrawn from Sunday's action at ParisLongchamp due to the feed contamination, the bay was able to find abundant cover in this field packed with talent and reserve his kick for the business end.

While the Richard Hannon pair Chindit (Ire) (Wootton Bassett {GB}) and Etonian (Ire) (Olympic Glory {Ire}) were never a factor and the supplemented Alkumait (GB) (Showcasing {GB}) ran too free along with his G2 Mill Reef S. combatant Fivethousandtoone (Ire) (Frankel {GB}), the race was an Irish affair from before the furlong pole. Even the G2 Champions Juvenile winner Cadillac (Ire) (Lope de Vega {Ire}) was in the pursuit, while the Jim Bolger runner Poetic Flare (Ire) (Dawn Approach {Ire}) was close enough to the premises to confirm the already-existing impression that the Irish hold sway with the juveniles in 2020. It was left to the 100-1 shot Devilwala (Ire) (Kodiac {GB}) to deny a one-two-three-four for the visitors, but the Ralph Beckett trainee had the stand's rail and there is a strong theory that a bias exists there on this track.

“We're delighted with both of them,” the Ballydoyle handler said. “The plan was that St Mark's Basilica would run in France and then Wembley would run in the Dewhurst, that's the way we were going. We've always liked St Mark's Basilica a lot and we've always thought they were very smart colts. The first three were were the same three as in the National Stakes. Every year it's a great race and the form always stands up. The Breeders' Cup is possible for the winner, but we're thinking Battleground will go to the Breeders' Cup, so he doesn't have to go.”