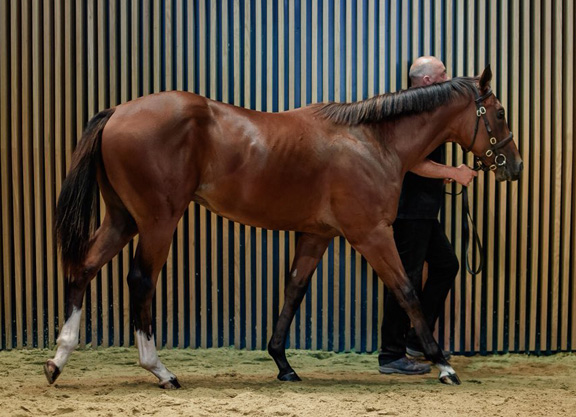 DEAUVILLE, France—During a sometimes lacklustre final session of Arqana's August Sale, Godolphin buyer Anthony Stroud provided a late highlight when going to €380,000 for a full-brother to G3 Prix Eclipse winner Souvenir Delondres (Fr). The son of Siyouni (Fr) was one of three yearlings by the same sire in the top five lots of the day.

Consigned by Hubert Honoré for breeder Chris Wright of British-based Stratford Place Stud, lot 293 is a son of the Almutawakel mare Dilag (Ire), a half-sister to GII Schuylerville S. winner Distinct Habit (Distinctive Pro) and the producer thus far of six winners from her eight foals of racing age.

While Stroud opined that the colt by the popular Aga Khan Studs resident was of a quality to compare most favourably to yearlings on offer during Part 1 of the sale, Wright, who had flown in for the day, was delighted to have had an obvious standout during Monday's session.

“He's a nice horse by a very good stallion who is a full-brother to a very fast horse. It's hard to know if he's have sold for more over the weekend but I'm very happy with this result. Hubert has done a fantastic job with him,” said Wright.

The breeder divulged that Dilag has visited another young Aga Khan stallion, Dariyan (Fr), by whom she has a foal on the ground, and she is now in foal to Kodiac (GB). Souvenir Delondres is also now in the Stratford Place Stud broodmare band and has a Muhaarar (GB) yearling filly which has been retained to race, as well as a colt foal by Frankel (GB).

Another graduate of the farm to have been making headlines this year is leading first-season sire Bungle Inthejungle (GB), a dual Group 3 winner for Wright and Emily Asprey before retiring to Rathasker Stud.

Wright added, “I'm thrilled to see how well 'Bungle' is doing and it's great for the stud as he's out of a daughter of our foundation mare [Crime Of Passion]. I have a 2-year-old by him in training in France, Jungle Speed (Fr). He's been second twice and we feel he's a black-type horse.”

Not Quite Deja Vu…

There was a slightly odd sense at Arqana over the last three days of everything remaining virtually the same but feeling decidedly different. Anecdotally, a number of vendors felt the sale was a struggle in parts, but the figures were pretty close to being a mirror image of those posted 12 months earlier.

For the August Sale as a whole, the record median of €110,000 set in 2016 has now been matched in three consecutive years. The same number of horses, 231, was sold this year as last but the 2018 catalogue had returned to its more regular size following a downturn last year so the clearance rate was down to 73% from 76%. The overall turnover was also slightly reduced, by 2%, to €36,891,000.

Familiar faces from the Ecurie des Monceaux team filled the leading vendor role, with 32 yearlings sold for €9,325,000, but special mention must go to Ballylinch Stud, which enjoyed a particularly good day on Sunday and sold six of its select draft of seven for an average price of €355,000.

The leading buyer by aggregate was Coolmore with five horses secured for €2,650,000, but Al Shaqab Racing has the most new recruits—17 for a total of €2,387,000. Eleven individual buyers spent more than €1 million.

David Menuisier has been enjoying a banner season thanks largely to his stable star Thundering Blue (Exchange Rate) but the French-born, British-based trainer played a starring role himself back in his native country when signing for the day's second-top lot (246), a son of the progressive young stallion Intello (Ger), at €290,000.

Consignor Hubert Honoré was also responsible for this colt who was bred by Chantilly trainer Nicolas Clément. The half-brother to three winners, including the black-type pair of Street Fashion (Street Sense) and Flower Fashion (Flower Alley), was also on the list of Amanda Skiffington and Fiona Carmichael, who bought Intello (Ger)'s Group 1 winner Intellogent (Fr) in Deauville last August but this time had to settle for the role of underbidders.

“I thought he was the best colt in the sale by the sire and I feel very lucky to have an owner who will invest in top-quality horses,” said Menuisier, who confirmed that his purchase was on behalf of Thundering Blue's owner Clive Washbourn.

He added, “I am a fan of the sire and there's bags of speed on the dam's side.”

Thundering Blue became the first group winner for Menuisier when winning the G2 York S. in July and he returns to the same track tomorrow [Wednesday] having been supplemented for the G1 Juddmonte International.

“He's in great form,” the trainer reported of the 5-year-old who has won five of his 18 starts. “It's going to be tough but we have nothing to lose and the pressure is very much on the others. Thundering Blue is typical of the type of horse I have in the stable. He's progressive and I like to buy horses who look like they will be 3- or 4-year-olds rather than precocious types.”

Siyouni Fillies Home and Away…

The popularity of Siyouni is spreading stateside and Justin Casse stepped in at €240,000 to buy lot 185, the leading filly of the day, for an undisclosed client in America.

“My client is not awake yet so I can't name her,” said Casse. “But I can confirm that the filly will be trained in America.”

Consigned by Haras d'Etreham, the first foal of Perle Rare (Distorted Humor) hails from a family that has served the Wildensteins well. Her grandam Peinture Rare (Ire) (Sadler's Wells) won the G2 Prix de Pomone and is a half-sister to the treble Group 1 winner Peintre Celebre (Nureyev).

Staying closer to home is lot 178, a filly by Siyouni out of the dual winner Orion Best (Fr) (King's Best), bought by Jean-Claude Rouget for €200,000. The trainer confirmed that the Haras du Chevotel-consigned filly will race for Jean-Louis Tepper.

It's not hard to be convinced by the long-term broodmare prospects of a filly by a superbly bred dual Classic-winning young sire out of a half-sister to the great five-time Group 1 winner Danedream (Ger) (Lomitas {GB}). David Redvers came to the conclusion that the daughter of Australia (GB) (lot 313) was also an extremely attractive physical specimen and went to €220,000 to secure the Ecurie des Monceaux consignee for Sheikh Fahad Al Thani.

“I thought she was the standout of today's sale,” he said. “We were looking for a Classic type and she walks beautifully and looks a picture. The stallion has made a really promising start and I'm sure there's more to come, and this filly is from the family of one of the best fillies we've seen in a long time.”

More Stars For Tsui and Haggas…

The Tsui family's success with Urban Sea (Miswaki) and her son Sea The Stars (Ire) (Cape Cross {Ire}) is now the stuff of racing legend and their six-time Group 1-winning stallion continues to provide the team behind Sunderland Holdings with many happy days on the racecourse.

Having bought this year's G1 Darley Irish Oaks winner Sea Of Class (Ire) as a yearling, Ling Tsui entrusted Nicolas de Watrigant to find her another Sea The Stars filly to add to the string and the agent, in company with Urban Sea's former trainer Jean Lesbordes, went to €200,000 to buy lot 188 from Thierry de la Heronniere's Haras d'Ellon.

“She is a super filly and I felt the price was very reasonable considering the quality of her page,” said de Watrigant of the granddaughter of the G1 Prix Maurice de Gheest winner Porlezza (Fr) (Sicyos {Fr}). “She is very like her sire and very relaxed, which is always a good sign.”

Like Sea Of Class, the filly will be exported to England to be trained by William Haggas.

“It hasn't been plain sailing but in the end the average and median prices have all but matched levels that, one must recall, represent all time highs,” commented Arqana CEO Eric Hoyeau after three days of trade. “It was good to see some first time investors, notably from America and Japan, enter the fray, yet they didn't quite fill the gap left by the reduced activity from some of the sale's historical players. Despite these changes in the buying bench, the top of the market was still deep with the top 15 horses going to 12 individual buyers. As ever our wholehearted thanks and congratulations go to the breeders and consignors who produced such athletic animals and to all the buyers who bought or attempted to buy them. Let their ventures be rewarded with success on the racecourse.”

There is one final day of trade in Deauville this month, with Arqana's increasingly popular V.2 Sale taking place today at 3 p.m. local time.