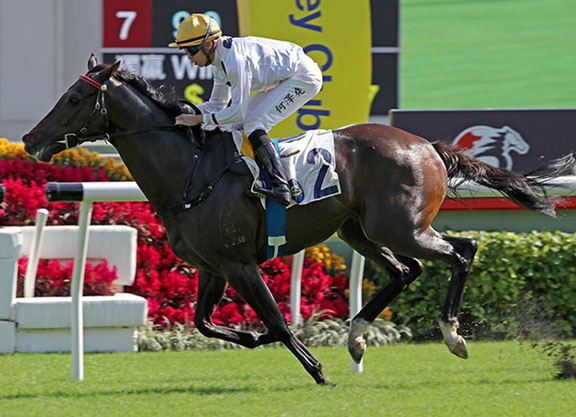 Sent off the $1.15 mortal in the Jockey Club Mile, Golden Sixty landed in midfield and switched off beautifully for his jockey Vincent Ho, as Ka Ying Star (GB) (Cityscape {GB}) galloped them along at a fairly leisurely clip for the opening 800 metres. Patiently handled on the circle, Golden Sixty was produced four wide off the home corner, split Mighty Giant (NZ) (Power {GB}) to his inside and Champion's Way (Aus) (Hinchinbrook {Aus}) to his outside and flew his final quarter mile in :21.89 to score with a fair bit of authority. Ka Ying Star held for second over the 8-year-old Southern Legend (Aus) (Not A Single Doubt {Aus}).

Ho believes Golden Sixty is still a horse on the rise–a scary proposition, to be sure.

“He felt really good and sprinted home really well,” the homegrown rider told HKJC's Steve Moran, “The main goal was to settle him as normal and to relax him and he hit the line strongly. He will always produce a really good last quarter. I was happy with how he raced, he's getting quieter and he knows what's going on now.”

Though he holds an entry for the G1 Longines Hong Kong Cup, Golden Sixty will remain at the mile for International Day Dec. 13.

The likeable Hot King Prawn (Aus) (Denman {Aus}) won the 2018 G2 Jockey Club Sprint and was heavily favoured to take the next step in the International Sprint, only to fade tamely into ninth. Second to his now-retired stablemate Beat The Clock (Aus) (Hinchinbrook {Aus}) in last year's Sprint, the 6-year-old will look to go one better next month following a tough-as-teak performance Sunday.

Ridden for at least a bit of pace by Joao Moreira, Hot King Prawn was in the firing line early but ultimately eased back to sit fourth, as Big Time Baby (Ire) (Dandy Man {Ire}) cut out the running outside favoured Computer Patch (Aus) (Exceed and Excel {Aus}). Three deep and without the benefit of cover rounding the bend, Hot King Prawn went on the attack four off the inside at the 400m, grinded his way to the front with less than a furlong to race and gutted it out. Computer Patch stayed on from second ahead of Rattan (NZ) (Savabeel {Aus}), who missed the break and hit the line strongly.

“He's six years old this season, but sometimes our good horses can be that age and still do their best,” winning conditioner John Size told HKJC's David Morgan. “Hong Kong is a place where mature horses can have an advantage sometimes. He had one start before the Hong Kong Sprint last season because he was coming back off a colic operation, so he was a little bit disadvantaged, so this time he's probably had a more comfortable preparation.”

The mount of Moreira, Furore landed in the box seat and was happy to monitor things from there, as the comebacking Time Warp (GB) (Archipenko) was pressed through a lively early tempo by Exultant. For a handful of strides approaching the entrance to the final 600 metres, Time Warp looked as if he might be able to pinch it, with Exultant off the bridle, but Furore got underway in earnest three abreast at the furlong grounds and edged clear. Exultant was forced to go forward from his high draw, but had to do a bit of work early to clear the positively ridden Playa del Puente (Ire) (Elzaam {Aus}), the near-upsetter in last year's Derby. The pace appeared to take its toll on Exultant, but to his credit, he was gaining inches on the winner at the finish and will be suited by the step up to the 2400 metres for the G1 Longines Hong Kong Vase, which he annexed in 2018.

“He travelled very kind, he had the cover that we were hoping for and the pace was quite genuine and when I gave him a clear run, they started to come back and he just kept running and showing his quality,” the 'Magic Man' told HKJC's Declan Schuster of the winner, who remains at the 2000 metres for the Cup.