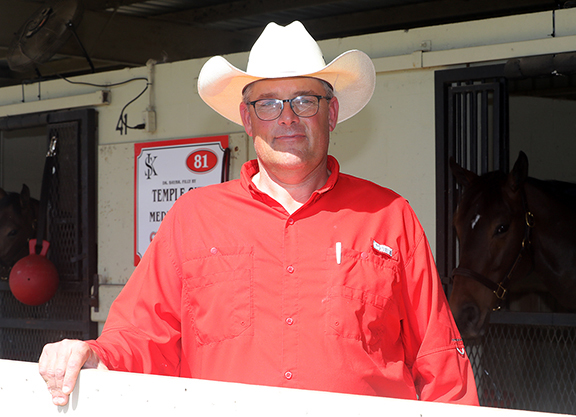 Scott Kintz's Six K's Training and Sales has a strong foundation to build on after surviving its first 2-year-old sales season, of all years, in 2020. The veteran horseman has enjoyed some strong advertisements on the track in the interim as he and his crew being their first group of 2021 juvenile offerings to market at this week's OBS March sale.

“Obviously, it has not been fun or easy,” Kintz said earlier this week of the added difficulties of building a new business in the middle of the covid pandemic. “I was just talking to [fellow consignor] Tristan de Meric and we were going back and forth about all the things that were happening at this time last year–first there were the indictments, and then the pandemic. Every single day when we were at the sale, you hear all the rumors that things are going to start shutting down. At the last day of the breeze show, things were really heating up. Every big city's shutting down, and we're wondering if we're even going to make it through this. Then you're showing horses to people and they're on their phones and you see them talking to people and saying things like, 'Louisville just shut down all their restaurants' or 'Lexington just shut down everything.' Every day it was just another kick in the shins. I commend OBS for doing what they did–we were there, the horses were there and they did everything they could do. I think they did really well by us as consignors to keep the show going.”

Kintz hails from a family of horse people. Both his grandfather and father were trainers, and his brother Matt is a multiple graded stakes-winning conditioner himself. Scott Kintz started his own training career as an assistant for Bill Helmbrecht before training on his own throughout the first half of the 90s at tracks like River Downs, Turfway and Thistledown.

“I got married and my wife got pregnant,” Kintz said of what made him eventually change his career path. “It's a tough way to make a living, and tough on a family, so I called Frank Taylor [at Taylor Made]. Frank gave me a job, and I worked my way up to farm manager there.”

After 10 years at Taylor Made, Kintz spent another five as general manager at Woodford Thoroughbreds in Florida. His wife Kim remains Woodford's office manager.

“Once I got down to Florida, and got to be around the training horses and this and that, it was inevitable that l fell back in to training horses,” he said.

After a stint managing Mandy Pope's Whisper Hill Farm, Kintz took the plunge and opened up his own operation in the summer of 2019. Six K's is based at the Ocala Jockey Club.

Kintz called on his past relationships, particularly those forged at Taylor Made, to help him navigate treacherous waters early on.

“Mark Taylor called me and he said, 'Just survive. If you can survive, you're going to be better off when it's all over. Just do what you've got to do survive this.' And that's all we did–we just worked harder to make it work,” said Kintz, whose team includes his son Nick and his aforementioned brother. “This year things are better, and we've got the opportunity to start climbing out of it now. For me, being the new guy, it wasn't easy, but it might have been a little easier on me because I didn't have the infrastructure that the bigger guys have. We were able to just tighten down our belts. We were broke going into it, so we were broke coming out of it.”

Kintz got a major boost that first year when prominent owner/breeder Robert “Shel” Evans sent him a group of horses.

“We had all of Mr. Evans's mares at Taylor Made when I was there,” Kintz noted. “Shared Interest, who was [Evans-bred GISW and sire] Forestry's mother, had some real problems when I was there, and needed extra care. Because of who she was, being Forestry's mother and [GI Breeders' Cup Juvenile Fillies winner] Cash Run's mother, she always got a little extra. Mr. Evans, I think, really appreciated that, so he and I got to be pretty close. When I went on my own, I ran into him at Saratoga and I said I'd love the opportunity to train some for him, so that's how it happened… I can't thank him enough.”

Among the group of youngsters Kintz got from Evans was a Candy Ride (Arg) colt out of a mare by none other than Forestry. Bought back for $190,000 as a KEENOV weanling and $70,000 as a KEESEP yearling, the dark bay breezed in :21 flat at the pushed-back OBS Spring sale.

Acquired by Frank Fletcher Racing Operations for $250,000, he was named Candy Man Rocket and turned over to Bill Mott. After a 9 1/4-length second-out romp at Gulfstream Jan. 9, the colt annexed the Feb. 6 GIII Sam F. Davis S.

“I loved that horse. I know it's easy to say now, but he was the best horse I had last year by a lot,” Kintz said. “The pandemic probably helped him. He was in the April sale, so pushing things back to June for him, as a Candy Ride and a big, strong horse, he needed that little bit of extra time. The first time we breezed him, he galloped out in :35, and I told the rider when he came back to never do that again. And the rider said, 'I didn't expect to do it then. I smooched to him one time and he was gone.' He was a superstar from the start, and real laid-back, easy to get along with horse at the barn… But when you asked him, he was there.”

“I was obviously a little disappointed with the way he ran the other day, but I know he's in the right hands–there's no better person to have him than Bill Mott, and he'll figure out what happened and he'll come back to be the horse we thought he was a month ago,” Kintz said.

Evans had never before targeted the 2-year-old sales with his produce, and won't again this year–Kintz said last year was a function of a number of Evans's horses being bought back as yearlings. At the 2020 yearling sales, Evans was able to get most if not all of his horses sold.

In addition to quality first graduates like Candy Man Rocket, perhaps an even bigger endorsement for the Six K's program is how many from last year's sales have made it to the races. Kintz consigned a total of 15 head at last year's OBS auctions, and no fewer than 12 have already made the races by March of their sophomore season.

“We're very hands-on,” Kintz said when asked about his training approach. “I see and touch every horse every day. My brother and my son are very good at being hands-on as well. We have a great crew, and we just take our time. There's no pushing them through things… That's my biggest thing. Obviously, I want to sell and I want to be profitable selling, but if I push every horse through a sale and get them all sold, but they don't become racehorses and they don't become decent racehorses, eventually I'm not going to sell them for long anyway. So I'd rather take my time, and maybe not get the absolute last dime I can get out of them. Then they'll be good for me down the road. They're going to go on and be good, sound horses who make it to the races and become as good as they can become, and then those buyers come back and see me again.”

While Six K's current crop may not possess the pedigree power that last year's did, Kintz believes this group makes up for it and then some on raw talent and physicality.

“I think this is a better crop than the one I had last year,” he said. “I don't think I have the pedigree that I had last year, but I think my horses physically and talent wise are better. The four I have here in March are very solid, sound horses. I think they're going to go right on and be fine. Last year, I had Candy Rides and Into Mischiefs and Quality Roads, and they were superior pedigrees, and pretty good physicals and pretty good talent wise. But the ones I have this year have half the pedigree, but I think they're twice as talented, I really do.”

When asked to single out members of his March consignment, Kintz said, “I think my Summer Front colt (hip 215) of Dr. Hansen's is a standout–he's really fast and very precocious. The one who I think may turn out to be the best racehorse of the bunch is the First Samurai filly (hip 278). At every sale you go to, there's a horse who gets better as you get to the sale, and she's that one. Every day she's here she's a better horse. Some horses just thrive on the action and starting to crank things up a bit and that's her. I'm really looking forward to her. She doesn't have a ton of pedigree, but she's got a ton of talent.”

Hip 215 is out of a mare by Dr. Kendall Hansen's champion juvenile Hansen. His dam is a half to MSW/GSP Thirtyfirststreet (Good Journey). The Feb. 23 foal went in :10 flat during the under-tack preview.

“I sure feel like racing is going to help us,” he said. “Oaklawn just bumped their purses up huge; Belmont's going to have record purses; Churchill and Keeneland's purses, with getting the historical horse racing back, those purses are going to get crazy. All that has to help us; it can't be hurting us. The one thing hurting us some still is the uncertainty of the pandemic. Even though it's kind of winding down, I just feel like owners aren't as emotionally attached when there's uncertainty about whether or not they'll be able to go to Saratoga this summer or be able to go watch their horses run. I think that's going to hold us back a little bit, but to me, racing seems to me to be thriving through the pandemic. It's almost been a shot in the arm we've kind of needed to make people realize that we're here. We're always here, and we're never going away, so hopefully that's what helps us.”