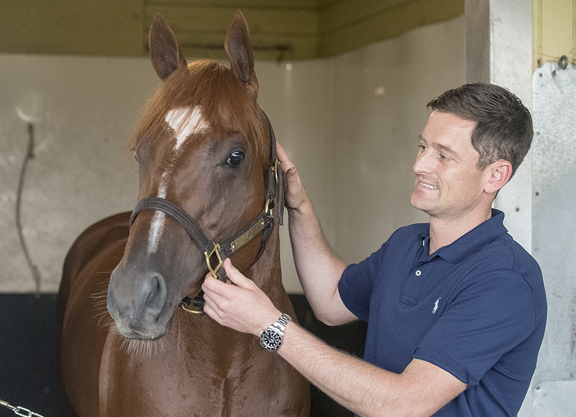 Jack Sisterson, who has trained privately for Calumet Farm since 2018, is going public. Calumet will remain as a client and will keep a number of horses with Sisterson, but significantly fewer than he has typically had.

Sisterson said he is making the move in the hopes that expanding and taking on other owners will lead to more opportunities.

“This is something we have been discussing for a few months,” he said. “I give all the credit to Calumet. If it weren't for them I wouldn't be where I am today. We started discussing things a while ago and it looked like the only way that I could grow in this business was to reach out, branch out and always try to do better. Talking to the people at Calumet, they said at one point that it would be selfish to hold on to me as a private trainer. They also said that if I ever decided to go out on my own they'd still like to have a working relationship with me.”

Sisterson, a native of Durham, England, was a long-time assistant to Doug O'Neill before going to work for Calumet. Calumet uses a number of different trainers, but Sisterson was the only one among them who trained exclusively for the operation. He won his first stakes for Calumet with Oxy Lady (Oxbow) in the 2018 GIII Tempted S. In 2019, his first full year with Calumet, Sisterson won 20 races, including three graded stakes. The team reached new heights in 2020 when Sisterson won his first two Grade I races, taking the GI Personal Ensign S. with Vexatious (Giant's Causeway) and the GI Cigar Mile H. with True Timber (Mineshaft). There were two more Grade I wins in 2021, the GI Man o'War S. won by Channel Cat (English Channel) and the GI Alfred Vanderbilt H. won by Lexitonian (Speightstown).

“For four years, we have had a lot of success and a lot of fun times,” Sisterson said. “We've had a few Grade I winners together What I'd like to do now is to continue to win Grade I's for Calumet and for other organizations, as well. The long-term goal is to win a Kentucky Derby, to win Breeders' Cup races.”

Sisterson said that the continuing support from Calumet will make the transition to being a public trainer easier to accomplish.

“I'm excited,” he said. “I would have been nervous if I weren't getting the support of Calumet. They are 100 percent behind this. It's a dream come true. They have allowed me to train privately for them for four years. Now they're going to help me out and give me a number of their best horses. Their support has been unbelievable. I'll forever be in their debt for the support they have given me.”

Sisterson plans on unveiling his new stable at the Del Mar meet.

“I worked for Doug for so long in California and had a very good experience there,” Sisterson said. “I'd like to go to Del Mar for the summer and take advantage of the ship and win program. I know California well. California has been good to me and I'd like to get back there. I think California racing is very much still alive and I'm excited to think I will be a part of it. The short-term goal is to get the public stable set up at Del Mar and to have winners at the meet and to be able to continue to grow after this summer.”