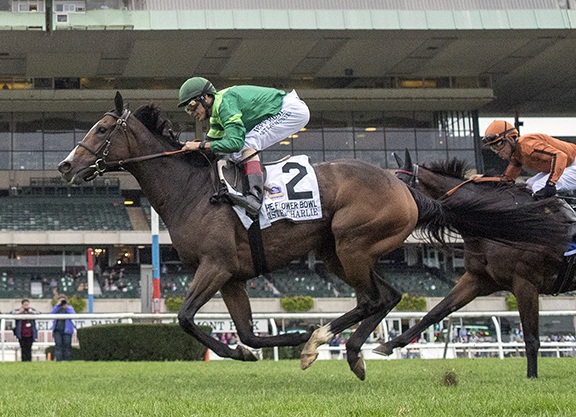 Trainer Chad Brown has won the last three runnings of the GII Ballston Spa S. and five of the last eight and he's likely to add to those totals when he sends out champion Sistercharlie (Ire) (Myboycharlie {Ire}) Saturday afternoon at Saratoga.

Never worse than fourth in her 15 career appearances, the Peter Brant colorbearer defeated her favored stablemate Rushing Fall (More Than Ready) in defense of her title in the GI Diana S. about this time last year and became the first in history to win the GI Beverly D. S. in consecutive seasons in her next outing. A measured winner of the GI Flower Bowl S. Oct. 6, she was last seen finishing third in her GI Breeders' Cup Filly & Mare Turf repeat attempt Nov. 2. Brant won the 2018 Ballston Spa with Quidura (GB) (Dubawi {Ire}).

One year Sistercharlie's senior is the 7-year-old Starship Jubilee (Indy Wind), a 17-time winner and third to the Brown-trained Significant Form (Creative Cause) in last year's Ballston Spa. The Florida-bred has won five of her six most recent starts, including the GI E. P. Taylor S. at her Woodbine base in October and was three-for-three over the winter in Florida, winning Gulfstream's GIII Suwannee River S. Feb. 8 and the GIII Hillsborough S. at Tampa Mar. 7.

Call Me Love (GB) (Sea The Stars {Ire}), already a multiple group winner in Italy, gave an excellent account of herself when runner-up to Rushing Fall in the GIII Beaugay S. on her U.S. debut June 3, but was a disappointing fifth when a well-backed 5-4 second choice in the GII New York S. June 27.