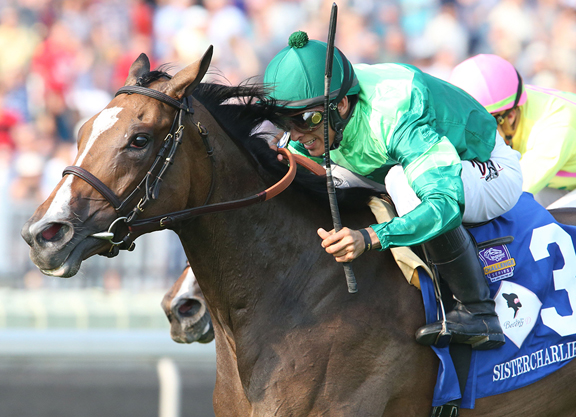 Peter Brant's Eclipse Award winner Sistercharlie (Ire) (Myboycharlie {Ire}) is one of eight pre-entries for and looks to become the first in the 30-year history to win the GI Beverly D. S. more than once when she lines up in the 9 1/2-furlong heat at Arlington Park Aug. 10. Trainer Chad Brown, who has sent out the winner of the Beverly D. for four consecutive years, is also set to be represented by GI American Oaks winner Competitionofideas (Speightstown) as well as Brant's Thais (Fr) (Rio de la Plata), a longshot third to round out a Brown 1-2-3 last summer. Aidan O'Brien sends in a pair of Ballydoyle runners, including G1 Irish Oaks runner-up and G1 Investec Oaks third Fleeting (Ire) (Zoffany {Ire}). Magic Wand (Ire) (Galileo {Ire}) has also been pre-entered for the Beverly D., but is likely to face the boys in the GI Arlington Million.

Robert Bruce (Chi) (Fast Company {Ire}) will look to join the legendary John Henry as two-time winners of America's original seven-figure race and would become the first to put them back-to-back. But he will play second fiddle to stablemate Bricks and Mortar (Giant's Causeway), who easily accounted for Robert Bruce in the GI Manhattan S. June 8 and will look to remain perfect in five appearances this season. Intellogent (Ire) (Intello {Ger}), a latest fourth in the G1 Prix d'Ispahan, looms the most intriguing of a four-strong foreign contingent.

Shortened to a mile for this running, the GI Secretariat S. also looks to be in Brown's wheelhouse, as he has entered Brant's GISW Fog of War (War Front) and eFive Racing and Mike Ryan's unbeaten Valid Point (Scat Daddy). Faraway Kitten (Kitten's Joy) is set to cut back in trip off his upset win in the GIII American Derby July 13, while the O'Brien-trained Never No More (Ire) (No Nay Never) could make his first appearance since annexing the Listed Leopardstown 2000 Guineas Trial Apr. 6.