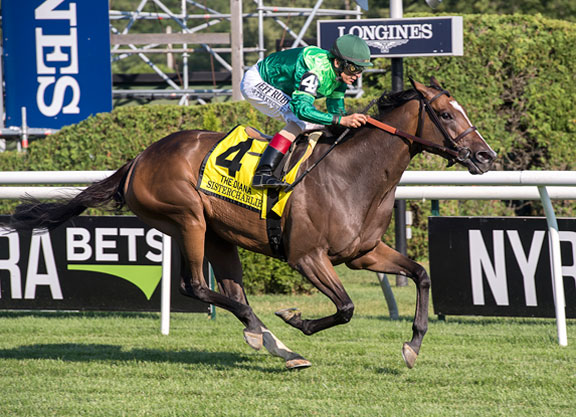 Champion and win machine Sistercharlie (Ire) (Myboycharlie {Ire}) looms large as she looks to defend her title in an expected seven-horse renewal of Saturday's GI Beverly D. S., the first of three Grade Is at Arlington.

A winner of three of four to start her career in France, the bay earned a trip to America with a second at 12-1 in the G1 Prix de Diane Longines two summers ago. Since then, she's a neck and a head from being undefeated in seven U.S. starts, all except one coming at the Grade I level.

Finishing a neck second in the GI Belmont Oaks Invitational, her only Stateside outing as a 3-year-old, she made her 2018 debut with a convincing win in the GI Coolmore Jenny Wiley S. at Keeneland. Runner-up by a head in the GII New York S. after that, she annexed the GI Diana S. Beverly D. and GI Breeders' Cup Filly & Mare Turf to earn her champion turf female statuette. Unveiled for the season July 13, the Peter Brant colorbearer looked as good as ever, sweeping to a repeat conquest of the Diana.

Sistercharlie's main competition appears to be Coolmore's 3-year-old filly Fleeting (Ire) (Zoffany {Ire}), making her North American debut while facing elders for the first time. Upsetting the G2 William Hill May Hill S. at 12-1 in her juvenile finale last September at Doncaster, the bay was last of 15 in the G1 QIPCO 1,000 Guineas off the bench May 5 at Newmarket, but has been in top form since. Third at 25-1 in the G1 Epsom Oaks May 31, she proved that was no fluke when second behind the promising Star Catcher (GB) (Sea The Stars {Ire}) in Royal Ascot's G2 Ribblesdale S. June 20 and came up just a half-length short of that rival once more in the G1 Kerrygold Irish Oaks July 20 at The Curragh.