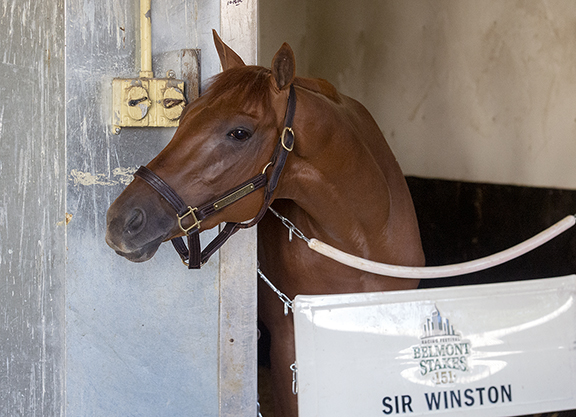 Last season's GI Belmont S. winner Sir Winston (Awesome Again) will attempt to return to the scene of his most important victory and try to add Saturday's GII Suburban S. to his resume. Runner up in the GIII Peter Pan S. prior to his win in the third jewel of the Triple Crown, the Tracy Farmer hombred was sidelined because of a left front ankle injury last summer. Resurfacing with a forgettable 12th after a troubled trip in a soggy renewal of the one-mile Woodchopper S. over the Fair Grounds turf Dec. 28, he bounced back to win an Aqueduct allowance over a mile Jan. 31. Most recently, the chestnut finished second in the slop in the 11-furlong Flat Out S. June 11.

“It was a lot to ask of him,” said Casse of his latest start. “There was no speed in the race and the sloppy track probably didn't help us either. He got a little tired, but he showed gameness to even run second. I think he'll run really well.”

“I think he got a lot out of it,” said Casse regarding the Flat Out. “My biggest concern is that he got too much out of it. He came back and worked well. He's a happy horse and he loves Belmont.”

Tacitus (Tapit) has proven to be an enigma, seemingly poised to take it to the next level but never quite making the transition. Out of the Grade I-winning mare Close Hatches (First Defense), the Juddmonte hombred earned a pair of graded victories early last season–the GII Tampa Bay Derby and GII Wood Memorial- before finishing fourth, but later being elevated to third via the DQ of Maximum Security (New Year's Day)–in the GI Kentucky Derby and second in the Belmont S. Runner up in Saratoga's GII Jim Dandy S. and Travers S., he rounded out the season with a third in the GI Jockey Club Gold Cup. Fifth in the Saudi Cup in February, the roan was slated to run in the Dubai World Cup but was re-routed after that program was canceled due to COVID-19 and most recently finished fourth in the GII Oaklawn H. May 2.     The front-running Mr. Buff (Friend or Foe) accounted for five of nine races in 2019, including five stakes victories, four of those against state-bred company. Winner of Aqueduct's Jazil S. against open company last term, he successfully defended his title in the Jan. 25 renewal of the race before adding a 20-length score in the Haynesfield S. for Empire breds Feb. 22. Moretti (Medaglia d'Oro), who finished second in his first two starts of the season, won his two latest, including the Flat Out S. most recently. Javier Castellano, responsible for both recent wins, gets the call Saturday.