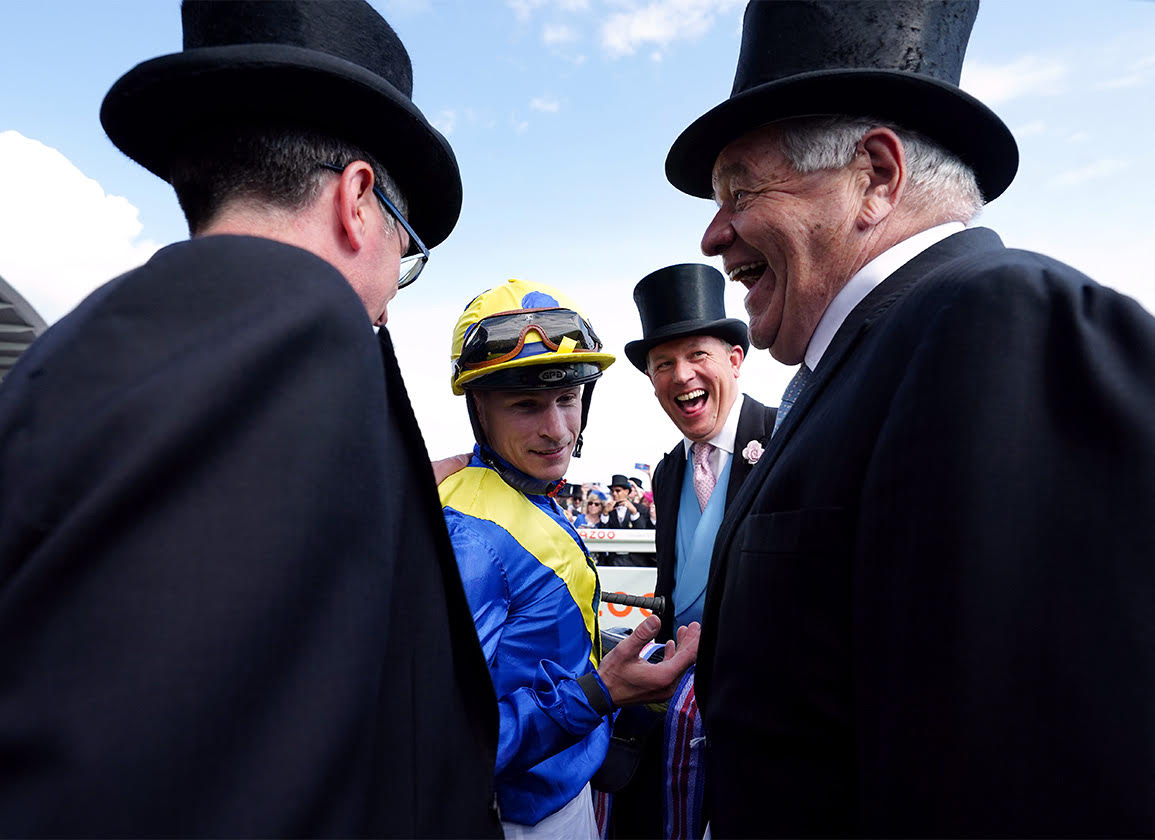 He has been branded a pessimist by Sir Michael Stoute for admitting as much, but Richard Brown of Blandford Bloodstock, who bought Cazoo Derby hero Desert Crown (GB) (Nathaniel {Ire}), believes Saturday's achievement will never be topped.

Brown, a renowned bloodstock agent with over 20 years of experience in the game, went to 280,000gns to secure Desert Crown on behalf of Saeed Suhail at Book 2 at Tattersalls in 2020 and counts himself as extremely lucky to have sourced what he believes is a once-in-a-lifetime colt.

“I ended up at Sir Michael's for quite a few glasses of wine on Saturday night,” said Brown on Monday. “I called him yesterday [Sunday] to thank him and I said, 'look, you've done this before but I haven't and I'm sure I never will again.'

“He gave me a bollocking and told me not to be a pessimist. I think it's once-in-a-lifetime stuff, mainly because so few Derby winners are offered up at public auction and you are up against the might of the top breeding operations like Coolmore, Juddmonte, Aga Khan and Godolphin. The chance of buying a horse like Desert Crown is so slim. We got very lucky.”

Desert Crown became Stoute's sixth Derby winner when powering home at Epsom under Richard Kingscote who, like Brown, was securing his first Derby. Prior to Saturday, Brown may have been best known for sourcing dual Group 1-winning juvenile Perfect Power (Ire) (Ardad {Ire}) and top-notch sprinter Dream Ahead. However, Desert Crown eclipses all other achievements in the business and Brown is convinced he will never come across one better.

He explained, “This won't be topped. It can't be topped. Rabbah Bloodstock was formed in 2006 and Jono Mills, who is one of my greatest mates, is the managing director and I work very closely with him, Bruce Raymond and Philip Robinson. It's through them that I have been able to buy for the people that I do. Also, I have known Sir Michael for a long time and, while we haven't done a lot of business together, we share a pretty big passion for cricket, which is all we ever seem to talk about. To be a small part of that team and to do it with these guys is very special.”

Brown added, “I am fortunate to buy for the people I do. I get to go to the sales and pick out the horses I like for people who trust me. It gives you a sporting chance. I spent many years going to the sales and not being able to buy these types of horses so I realise how fortunate I am that I have people who will back me to stretch out if I like one.”

Brown clearly liked Desert Crown as a yearling, as did plenty of others, given the colt fetched 280,000gns, above average for a colt by Nathaniel. But Brown was never going to be beaten to Desert Crown. Such was his love for him as a yearling, Brown revealed how he even ignored his own advice by laying his cards on the table and declaring his interest in the colt before he walked into the ring.

He recalled, “It's easy to say it now but he was outstanding, just a gorgeous horse with a great temperament, which he is showing now as a racehorse. We put a lot of emphasis on temperament at the sales and he just showed fantastically well.

“I actually pride myself on my poker face at the sales but I couldn't hide my love for this guy. I told Gary Robinson, who bred the horse, what an outstanding specimen that he was and, as the words were coming out of my mouth, I was thinking 'what are you doing, what about your poker face?' He was just bombproof, such a cool dude, and he showed that on Saturday. He walked around the paddock and down to the start like a pro and he was a pro during the race as well.”

Brown has been buying for Desert Crown's owner Saeed Suhail, whose colours were also carried to Derby glory by Kris Kin (Kris S) in 2003, for three years. He sources between eight and 10 yearlings for the owner every year and, while the first batch were forgettable, Brown believes he is making up for his mistakes with Desert Crown.

He explained, “Desert Crown is part of the second crop of horses I bought for Saeed Suhail. I didn't do a very good job with the first crop. We had some winners but didn't have a good horse. “I don't think I got the brief properly in the first year but we gave a good throw for a few horses in the second crop and luckily it's working out. To produce a Derby winner for Saeed Suhail is fantastic and there's some very positive reports about a couple of the 2-year-olds so hopefully that first crop is well and truly forgotten now.”

Brown added, “Nathaniel is a top-class stallion. You can't sire a mare like Enable (GB) without being top class. Andrew Stone of St Albans Bloodstock, who I do a lot of work for, had God Given (GB). She won a Group 2 in Britain before winning a Group 1 in Italy and was actually Luca Cumani's last Group 1 winner, so we have been huge fans of Nathaniel all the way through and the market does not give him the respect that he deserves.

“That can happen. I have always thought he was a very underappreciated stallion so, when I saw a colt as nice as Desert Crown, I knew we had a chance. If he was by Frankel (GB), Dubawi (Ire) or Sea The Stars (Ire), I wouldn't have been able to buy him. He's an absolute beauty and the exciting thing is that he was still one of the more unfurnished colts in the Derby field so there should be a lot more to come from him.”

There is still an amount of celebrating to do before a plan is drawn up for the rest of the season but Brown is convinced that Desert Crown can build on Saturday's heroics.

He said, “Sir Michael's training was exemplary. This horse had a minor setback in the spring. I went to see him in March and he was standing in his box so he was definitely undercooked heading into the Dante. When he won the Dante, I did think we had something special on our hands and it's looking that way now.”

“We are all having dinner tonight and I am sure it [future plans] will be discussed but that's well above my pay grade. The great thing is that, when you have guys as experienced as Bruce Raymond, Saeed's racing manager, and Sir Michael, you don't need to worry about it. They'll get things right. Where they decide to go next, that's down to them, I'm just lucky to be a small part of the team.”