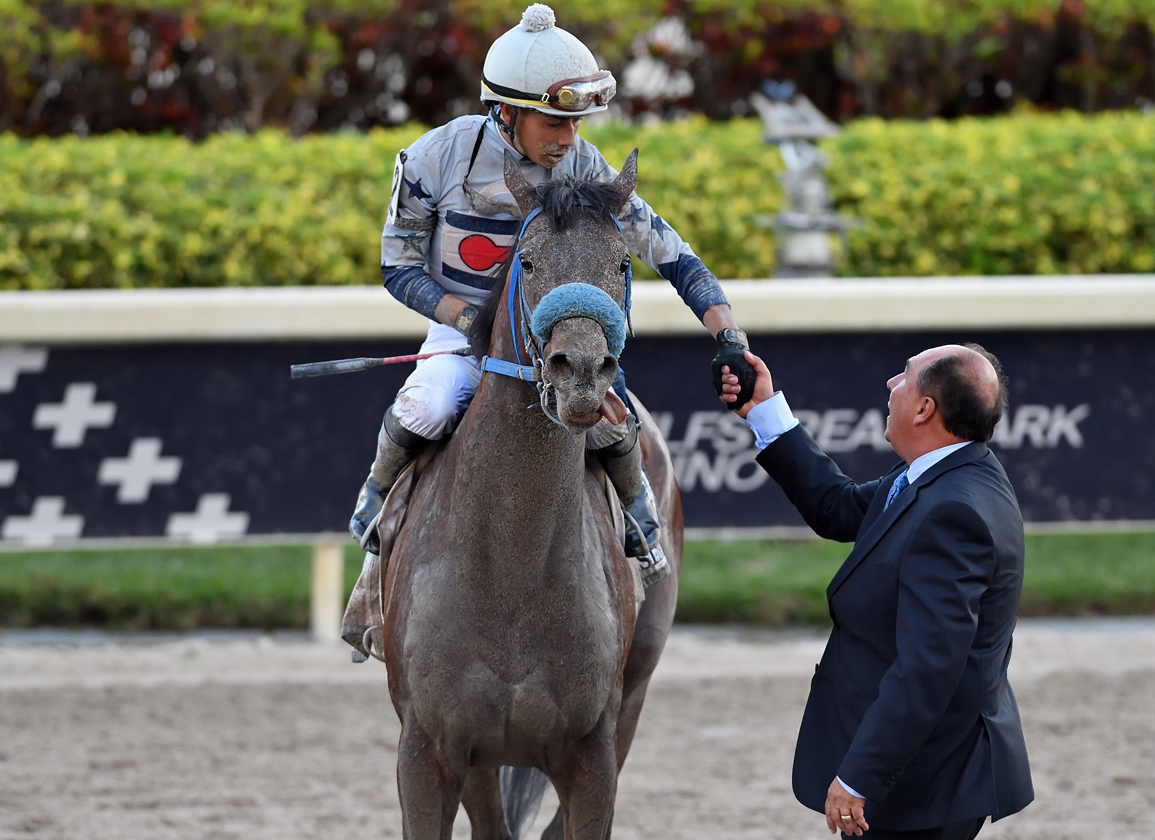 Tami Bobo's Simplification (Not This Time) returned to the Gulfstream Park worktab Saturday morning for the first time since scoring a dominant 3 1/2-length victory in the GII Fasig-Tipton Fountain of Youth S. Mar. 5 in Hallandale. The Antonio Sano trainee breezed five furlongs in 1:01.81 (15/28) under jockey Jose Ortiz before galloping out six furlongs in 1:14.85.

“It was a very good work. The horse worked in hand. He went very easy,” Sano said. “The gallop was good. The horse came back very good. That's what's important for me.”

Simplification rated well off the early pace before making a sweeping move to the lead and drawing away with authority to capture the Fountain of Youth. In the Feb. 5 GIII Holy Bull S., the Florida-bred colt, who had won the Jan. 1 Mucho Macho Man in frontrunning style, broke last from the starting gate and was caught wide throughout before rallying to finish second behind loose-on-the-lead White Abarrio (Race Day).

Trainer Kenny McPeek sent Lucky Seven Stable's Smile Happy (Runhappy) and Rattle N Roll (Connect) to the Gulfstream track to breeze in company following the break Saturday morning. Rattle N Roll on the inside and Smile Happy on the outside were credited with a joint bullet workout after breezing five furlongs in 58.81 (1/28).

“They worked super. They both needed a steady one and they both zipped along,” McPeek said. “I was really pleased with both of them.”
McPeek said he hadn't yet chosen between the GI Florida Derby and the Apr. 9 GI Toyota Blue Grass S. at Keeneland for Smile Happy's next start. Rattle N Roll, who finished fifth in the Fountain of Youth, is being pointed to next Saturday's GII Louisiana Derby at Fair Grounds.

Smile Happy closed to be second behind pacesetting Epicenter (Not This Time) in the Feb. 19 GII Risen Star S. in his 2022 debut after winning both of his races, including the GII Kentucky Jockey Club S. at Churchill Downs, in 2021.

OGMA Investments and Jack Hardin Towell Jr.'s O Captain (Carpe Diem), who closed from last to finish third in the Fountain of Youth at 87-1, breezed five furlongs at Gulfstream in 1:01.14 (11/28) Saturday morning. The Gustavo Delgado pupil, who broke his maiden at first asking and finished third in the Limehouse S. in his two prior starts, is being pointed to the Florida Derby.